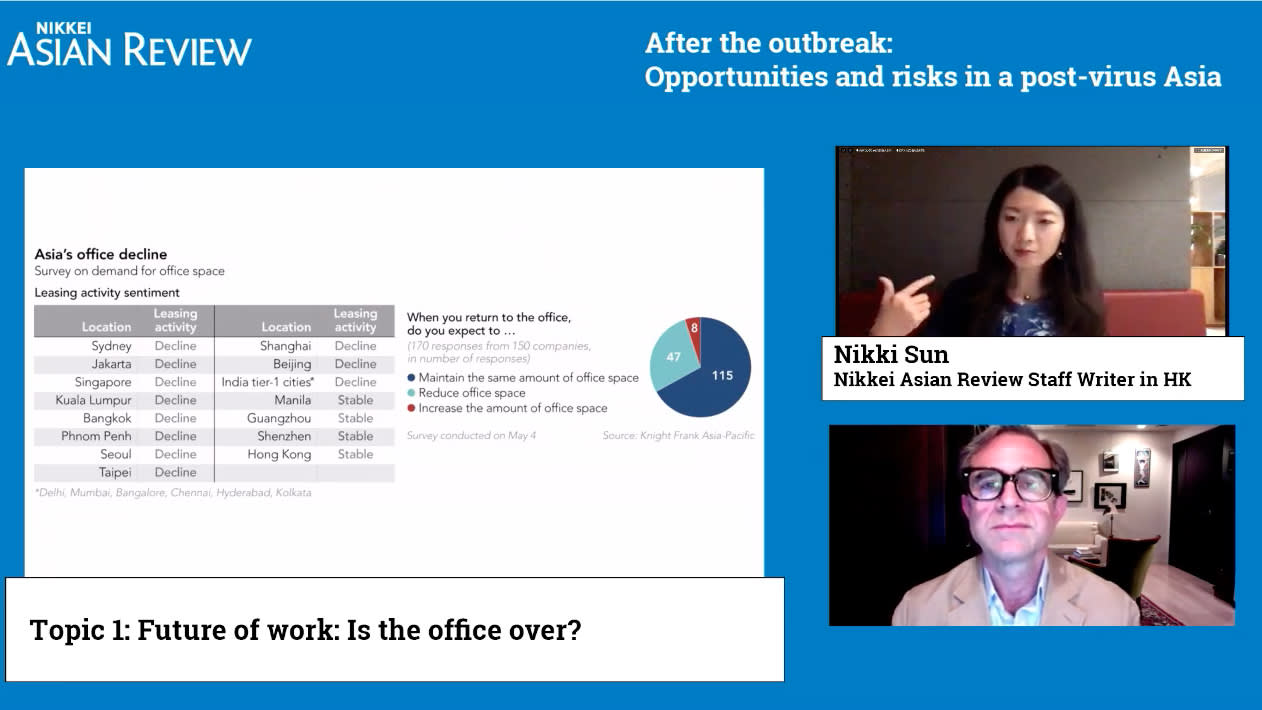 The Nikkei Asian Review held an exclusive webinar for subscribers on Wednesday via YouTube Live.

Titled "After the outbreak: Opportunities and risks in a post-virus Asia" and hosted by Managing Editor Christopher Grimes, the event covered new realities in different sectors as the region slowly emerges from the coronavirus shock.

Indonesia's largest e-commerce platform, Bukalakpak, saw transaction volume for April nearly reaching an all-time high. "The coronavirus is bringing in people over 50 who don't usually shop online, but now they have to," said Tani about the positive tide for Bukalakpak, whose fellow Asian unicorns, Grab and Traveloka, have had to lay off or furlough staff.

Coworking startups have also benefitted from corporate reforms brought on by the coronavirus. "A lot of coworking space operators told me they're getting a lot of clients during this crisis," said Nikki Sun of Nikkei's Hong Kong bureau.

But the shift to coworking may be bad news for property developers in high-value real estate markets like Hong Kong and Tokyo. "Companies are giving up permanent space because they don't know how long their business will last," Sun added.

Even before the pandemic, many startups were already trying to reform their business, haunted by cash-burning unicorns like WeWork and Uber. "Startups are having to save cash even more because they have to survive the next three or four months" with low expectations of new funding, said Tani. Because it had become profitable and kept overhead low before the pandemic, Indonesian coffee chain Kopi Kenangan was in a good position to raise $109 million this month.

A larger amount was raked in by local government financing vehicles, which fund infrastructure projects in China. "In the four months between January and April, LGFVs raked in 966 billion yuan ($136 billion)," said Kenji Kawase, Nikkei's chief business correspondent. "That's already 88% of what they got last year."

The growing volume of bond issuances from China's local governments and state-owned enterprises doubles the risk of a debt crisis. "China has learned a lesson in a very hard way," Kawase continued. "They claim themselves to be the savior of the world by spending so much money to prop up their economy and the world economy after Lehmann, but there were many overhangs like the zombie companies and assets that aren't economically viable, and banks with more bad debt."

China also has to be wary of a manufacturing exodus, as companies seek to diversify supply chains. A China exit could be a boon for Southeast Asian countries that are already well-equipped for manufacturing, like Vietnam, where Apple has already shifted some of its AirPods production.

"When people talk about relocating production, they're placing an emphasis on the government's ability to manage risk and mitigate disaster," said Tani. "It doesn't bode well for the likes of Indonesia," which has struggled to flatten its infection curve despite a lockdown in Jakarta.

As for plans to build a new Indonesian capital in East Kalimantan, Tani predicted that the construction industry would take a hit, as governments redirect infrastructure funds to tackling the coronavirus. "Indonesia has had to redirect funding for the new capital to build up health infrastructure," he said.