SHANGHAI -- Alibaba Group Holding has raised the target for store openings in its Hema Fresh cashless supermarkets to 100 this year from the originally planned 60 as the Chinese e-commerce leader gains confidence in its effort to combine physical stores with an online presence.

The grocery chain spans over 65 stores as of late.

Hema draws consumers with its assortment of fresh food, especially the seafood that cooks prepare on the spot for customers to eat. At one location in Shanghai, live crabs and fish can be found in giant tanks, not unlike a tourist attraction.

"The fresh fish that is prepared alive is delicious," said a 53-year-old man who arrived with four friends.

During Thursday's earnings call, Alibaba CEO Daniel Zhang credited the "new retail" concept with contributing to revenue growth. Sales from new retail, a term that integrates online shopping with bricks-and-mortar stores, more than quadrupled during the April-June quarter compared with a year earlier. 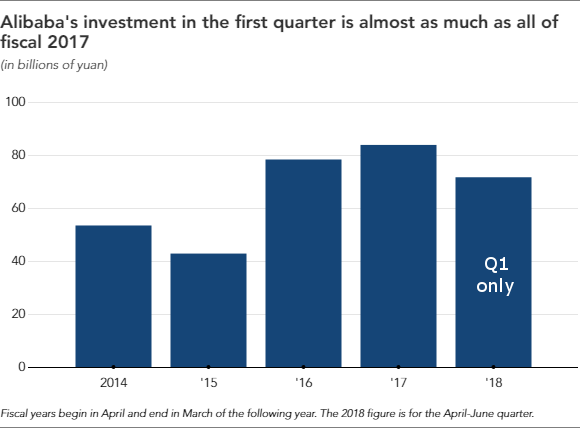 Though e-commerce has disrupted retailing as a whole, the online format struggles to accommodate perishable goods due to the need for developing cold supply chains. Alibaba looks to bridge the divide through so-called new retail and command a large slice of the fresh food market as well.

The gambit appears to be paying dividends.

"Because the fish and crabs I ate at the store were delicious, I began ordering products at home through the Hema app," said a Shanghai homemaker. The 52-year-old woman said she increasingly relies on home deliveries from Hema rather than going to supermarkets or other stores to buy food.

The Hema supermarkets not only serve as grocery stores that customers can visit, they also operate as warehouses for online orders. Deliveries are made within 30 minutes of receiving the order if the address is within 3 km of an outlet.

One Hema location did resemble a fulfillment center rather than a typical grocery store. Half of the employees were putting together online orders, walking around with delivery bags and smart devices in hand. The first Hema supermarket, at Shanghai's Jinqiao International Plaza, reportedly makes 70% of its revenue from internet orders.

Payments to Hema generally are confined to Alibaba's Alipay system. Deliveries use the tech leader's logistics network. To bolster that network, Alibaba spent about $5 billion in April to acquire Ele.me, the food delivery startup.

Alibaba and JD.com control over 80% of China's online retailing market combined. But to avoid the problems of a saturated domestic market, the two are reworking their strategies to further transform the supermarket sector. Alibaba teamed with two companies in China's Sichuan province in February to raise hogs using artificial intelligence. Alibaba said the monitoring tech will decrease the death rate of the pigs and lower costs.