Alibaba to bulk up shopping list of Japanese products Chinese tourists, like this one in a Tokyo drugstore, have taken a liking to Japanese brands. (Photo by Hideyuki Miura)
YUSHO CHO, YOICHIRO HIROI and AKIHIDE ANZAI, Nikkei staff writersMay 22, 2018 21:56 JSTUpdated on May 23, 2018 07:27 JST | China
CopyCopied

Daniel Zhang on Tuesday said Alibaba's Japan shopping list will include cosmetics, which are especially popular among Chinese consumers, baby products and a range of food items.

The company plans to sell made-in-Japan goods online, at supermarkets and department stores. The e-commerce juggernaut is fast expanding its physical retail chains.

The move comes as more Chinese are visiting Japan and returning home with knowledge of the country's brands and products.

Alibaba will set up a new division, the "great import center," which will be tasked with finding quality Japanese products not yet widely known among Chinese consumers, Zhang told Nikkei.

Alibaba so far has operated Tmall.com and other online outlets as marketplaces where third-party merchants, including manufacturers, sell goods.

The new project marks a shift that will have Alibaba directly operating its own online outlets and supplying its physical outlets, including the Hema Supermarket chain and affiliated department stores. 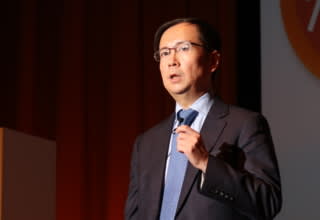 Alibaba's CEO Daniel Zhang talks about his plans for his "great import center," in Tokyo on May 22. (Photo by Akihide Anzai)

As Tencent Holdings, a rival in the mobile payment business, is boosting its investment in physical retail operations, Alibaba intends to differentiate itself by putting together a distinct product lineup.

Alibaba is not disclosing how much it intends to spend on its Japan spree. However, Kaola.com, operated by Chinese cross-border e-commerce company NetEase, said it plans to buy 500 billion yen ($4.5 billion) worth of Japanese products in the three years through 2020. Alibaba dwarfs Kaola and is likely to spend more.

Amid fears of a U.S.-China trade conflict, Zhang said Alibaba will also increase purchases from the U.S. and Europe, as "it matches state strategy to increase imports."

China is changing from an export-based economy to a consumption-oriented one, Zhang added.

Alibaba is trying to improve its credibility by directly handling products sold via its platforms. Chinese online retailers are fighting fakes and low-quality goods that are being shipped to consumers as internet sales soar. Alibaba will tackle the problem by tightening its product procurement, inspection and logistics operations.

Alibaba's new direction should give small Japanese companies that lack the wherewithal to open Tmall stores on their own an opportunity to expand in China.

The Chinese market is exceedingly expansive, Zhang told an audience of roughly 300 representatives from Japanese manufacturers on Tuesday. The Alibaba CEO discussed how the fusion of internet and bricks-and-mortar retailing holds promise for retailers.

The concept, christened as "new retail" by Zhang, seeks to enhance the customer experience at physical outlets by using data mined from e-commerce operations and the group's Alipay online payment system. Alibaba seeks to connect 6 million family-run shops in China to its platform, up from 1 million now, giving vast numbers of such businesses access to the e-tailer's massive volumes of data.

Alibaba's annual user base has climbed to 552 million people, and more of them make frequent online purchases through smartphones.

"I want Suntory to become a true global company," Takeshi Niinami, president of Japanese brewer Suntory Holdings, said during Tuesday's event. "For that to happen, we must grow our Chinese business together with Alibaba Group."

Stripe International, a seller of casual apparel based in the western Japanese city of Okayama, accepts Alipay payments at domestic outlets within the group, generating data on Chinese travelers visiting Japan.

"I wish to continue to adopt innovations in the retail industry together with Alibaba," said Yasuharu Ishikawa, Stripe's president.

Stripe will establish a Hong Kong unit this summer to broaden sales on Tmall. The apparel retailer seeks to expand its Chinese business to roughly 100 million yuan ($15.7 million) this year.

"We will use Alibaba's infrastructure to aim for 10 billion yuan in sales 10 years later," Ishikawa said.

Kose opened a flagship shop for its Decorte brand of cosmetics on Tmall earlier this year. The Tokyo-based personal care company expects to double its Tmall sales in 2018.