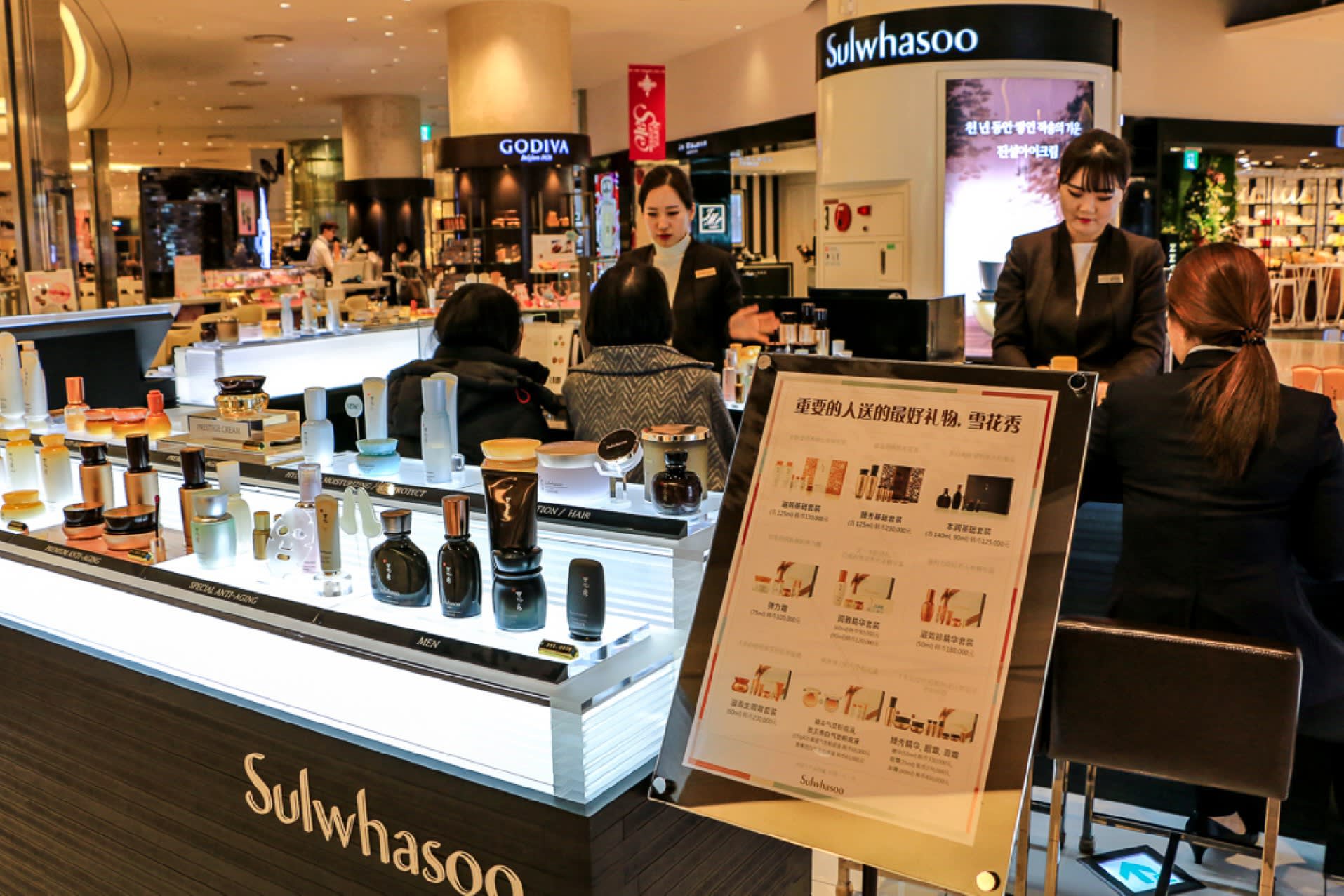 SEOUL/BANGKOK -- On the back of record sales in 2015, leading Korean cosmetics makers AmorePacific Group and LG Household & Health Care have their sights firmly set on expansion in the Asian market.

Much of the rise is down to tourism, with sales at duty-free shops in South Korea and across Asia enabling both companies to set new highs in both sales and operating profit. AmorePacific Group in particular had an outstanding year, logging sales of more than 1 trillion won ($842 million) of its high-end Sulwhasoo brand products for the first time.

Even before the start of Chinese New Year, Seoul's department stores and shopping districts were abuzz with chatter in Cantonese and Mandarin, and with South Korea also observing the holiday, Lotte and other tax-free shops were keen to capitalize on the influx of tourists, which AmorePacific Group and LG will no doubt thank them for.

The figures are even more impressive considering the outbreak of the Middle East respiratory syndrome in South Korea that took its toll on the country's tourism industry last summer.

AmorePacific Corp., the core company of the group, chalked up more than 1 trillion won in sales at duty-free shops in South Korea and boosted overseas sales by 44% to 1.2573 trillion won. The large gains abroad were due partly to the North American market. Foreign consumers contributed to nearly 50% of its sales.

It is the luxury brands that are leading the way for both companies. AmorePacific Group's Sulwhasoo became the first South Korean cosmetics brand to break the 1 trillion won mark in yearly sales, while LG's Whoo brand chalked up 808.1 billion won.

Sulwhasoo now joins the elite group of global cosmetics brands that log sales of around $850 million.

AmorePacific Group is now intent wrestling the title of biggest cosmetics maker in Asia from Japanese manufacturer Shiseido, targeting sales of 12 trillion won in 2020. Aside from high-end products like Sulwhasoo, the company's mid-range brands are also selling well, including Mamonde, a popular brand in China, and Innisfree, sales of which have been boosted by advertisements featuring pop-star Im Yoona. Innisfree is now available at more than 200 retail shops in China.

LG is also performing strongly, recording a 51% sales gain in China on an increase in the number of department stores and shops handling Whoo from 35 to 124.

The best form of flattery

The popularity of South Korean cosmetics is now spreading to other Southeast Asian countries, particularly Thailand.

Shiseido just about managed to retain its position as the continent's biggest cosmetics company, registering sales of 777.7 billion yen ($6.59 billion) in fiscal 2014 ended in March 2015, up 2% from the previous year. But the two South Korean makers are rapidly closing in, and AmorePacific Group has all but caught up in China.

According to Na Eun-chae, an analyst at Korea Investment & Securities, the demand for South Korean cosmetics in Asia is spurred on by the popularity of the country's movies and TV dramas.

Many other analysts, however, have put the rise down to an entirely different reason -- the significant marketing drive that both companies have undertaken in order to knock Shiseido off top spot.

The Japanese company stole a march on other cosmetics makers by becoming the first to establish a sales network in China. But as the company prioritized shipment to sales outlets, it has now been forced to restructure its China operations in the face of excess inventories and weakened marketing clout.

Taking a more down-to-earth approach, AmorePacific Group and LG have cultivated the market through sales at stand-alone stores, and gradually worked their way into tenancies at department stores where they share floor space with global leaders. They have also ambitiously pursued other sales routes, such as drugstores and online channels.

"The population of cosmetics users in China has topped 150 million and will reach 200 million sooner or later," said Suh Kyung-bae, chairman and chief executive officer at AmorePacific Group.

Some analysts point out that the two South Korean companies need to develop global brands as they currently rely excessively on the Asian market. Last year, for example, 91% of AmorePacific Group's overseas sales were made in Asia, particularly in China.

Shiseido, on the other hand, has built up a strong reputation in Europe and the U.S. In the first half of fiscal 2015, the company boosted sales in both based on strong demand, particularly for its high-end Shiseido brand.

While the Japanese company can fall back on balanced sales throughout the world, earnings at AmorePacific Group grew 39% in North America last year but dropped 19% in Europe.

AmorePacific sells its luxury Laneige brand of products in North America through a chain of 850 discount stores operated by Target but has yet to find its way extensively into department stores and other high-end sales channels.

As the availability of Laneige products at discount stores may damage the value of the brand, AmorePacific Group may prioritize quality over quantity in expanding its sales networks through measures such as upgrading its in-store sales sections, according to company officials.

With Japanese, U.S. and European cosmetics makers also positioning Asia as their priority market, it remains to be seen just how long the two South Korean makers will be able to keep their momentum going.