TAIPEI -- Taiwan's Delta Electronics, a supplier of power components to Apple, has begun efforts to expand production capacity outside of China to gain more flexibility in combating global trade frictions, with its chairman describing tariffs as a "bombshell thrown on global trade."

"We are not saying that we will give up the production bases in China," Chairman Yancey Hai said at an investors conference on Wednesday. "But the strategy will provide us with more manufacturing options and marketing resources to cope with the uncertainties."

The company approved spending 2.79 billion New Taiwan dollars ($91.2 million) to set up a manufacturing site in the southern Taiwanese city of Tainan, Delta Electronics said late Tuesday, as well as NT$1.5 billion to add a research and development center in Taipei.

Back in March, the company announced plans to expand manufacturing capacity in the Taiwanese cities of Taoyuan and Taichung.

Delta Electronics also said Tuesday it will launch a tender offer for Bangkok-listed associate Delta Electronics (Thailand), or DET, for no more than $2.14 billion. That purchase would give the Taiwanese company access to DET's manufacturing hubs in Thailand, India and Slovakia.

Delta Electronics owns a 20.93% stake in DET and plans to buy the remaining 79.07% with the offer of 71 baht in cash per outstanding share. 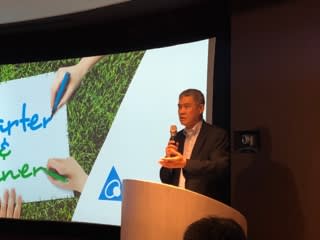 Delta Electronics counts Tesla, General Motors, Ford Motor and Cisco Systems as customers, in addition to Apple. About 80% to 90% of production occurs in mainland China, with the rest in Taiwan, the company says.

"What if Europe would also impose higher tariffs on goods [from China]?" Hai said. "In that case, we could leverage DET's production base in Europe to ship our products."

Hai expects to receive approvals from Thailand and the antitrust authorities in the U.S., China and European Union regarding the purchase in three to six months. The acquisition will be completed within 25 days afterward, he said.

Hai attributed the decrease in margin to rising component costs and slowing growth of Delta Electronics' industrial automation business due to the U.S.-China trade war. The business accounted for 17% of the company's revenue in the April-June quarter.

"The slowdown of industrial automation growth is obvious in the past two months," he said. "Many of the clients halt their investment just to monitor how the trade spats would develop."

Exports of Delta Electronics' industrial automation components from China to the U.S. also are affected by Washington's $34 billion tariff imposition that took effect July 6, Hai said. Another $16 billion tariff increase does not affect the company's goods, but the newly proposed $200 billion tariff by Washington might cover more of Delta's products such as motors and inverters, he said.

"The second half of the year is usually the peak season for the industry, but who knows if there will be another bombshell thrown on global trade?" the chairman said.