TAIPEI -- Tightening environmental protection measures and growing labor costs may now pose a further headache for Apple and its suppliers in coastal cities in China at a time when global demand for smartphones is softening.

Apple has been relying on China as its main manufacturing base for its hardware, including iPhones, MacBooks, iPads, Apple Watches and the upcoming HomePods. Its major assembler Hon Hai Precision Industry, known as Foxconn Technology Group, is the largest employer in the private sector in China with nearly 1 million workers.

Chinese component makers accounted for about 10% of Apple's top 200 suppliers in 2017, while Taiwanese hardware suppliers, many of which base their factories in China, make up about 25%, according to a previous estimate by the Nikkei Asian Review.

In December, 270 companies with manufacturing facilities in the city of Kunshan, Jiangsu Province, about 50km west of Shanghai, were notified by the local government that they needed to stop production for half a month as water quality in the nearby Wusong River was poor, Chinese media outlet The Paper reported.

According to a list of the 270 companies circulating on Chinese websites, several Apple suppliers were named as companies affected, including two Foxconn subsidiaries, print circuit-board maker Career Technology and Nanya Plastics, an electronics-material maker, both based in Taiwan. Kunshan is known as "Little Taipei" for its large number of Taiwanese manufacturers with operations in the city.

Taiwanese businesses contributed to 80% of Kunshan's total trade of 240 billion yuan ($37.4 billion) in the first half of 2017, according to a report in September by Taiwan's mass circulation United Daily News, citing a local Kunshan official. The Kunshan Taiwanese Business Association boasts of some 1,600 companies as its members, according to its website.

According to Apple's official supplier list, published in early 2017, 23 of its suppliers have facilities in Kunshan. Among them, Taiwanese contract electronics makers Pegatron and Wistron are assembling iPhones in Kunshan, while Foxconn subsidiaries and China's Luxshare-ICT also have sites in the city, making cables and connectors for Apple.

Not all of Apple's 23 suppliers in the city were included in the list of 270 companies, many of which are also servicing Chinese smartphone and electronic-device brands.

Executives at several Taiwanese companies with operations in the area confirmed to the Nikkei Asian Review that they had received the notice.

Following the report in The Paper, a spokesman for China's Taiwan Affairs Office, An Fengshan, denied that the Kunshan government had suspended operations of factories, but he said that local officials were looking to bolster anti-pollution measures.

"We hope Taiwanese companies with operations in the area can understand and support the Kunshan city government's measures to deal with pollution and protect the environment," An said at a press conference at the end of 2017.

Although Kunshan authorities later pulled back the ban and instead ordered the companies to reduce waste water by 50% for half a month, it is indeed a warning to all the factories in the area, according to several industry executives whose companies own facilities in the area. A fisherman looks for fish in a polluted river in Nanjing, Jiangsu province in 2009.   © Reuters

The tightening of environmental controls in Kunshan comes as China vows to tackle air, water and soil pollution, which have plagued the country for years. President Xi Jinping also highlighted during the 19th Communist Party Congress last October that his administration would make a greater effort to "build a beautiful China with a clean environment." The country introduced an environmental tax at the beginning of 2018 designed to address the problem, according to the state-run Xinhua News Agency. 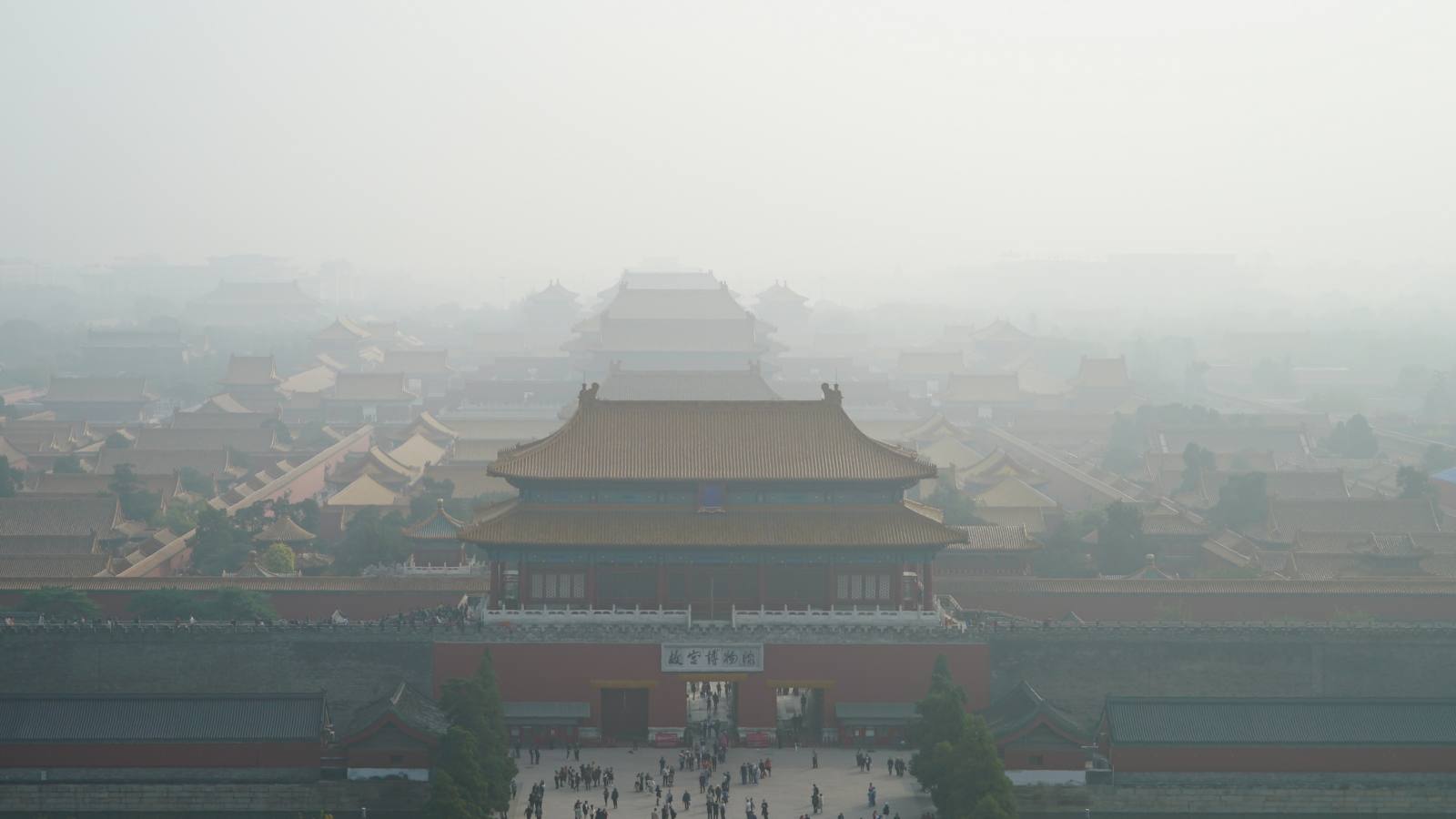 "For companies that continue to base their operations [in Kunshan], they will need to add equipment to handle waste water or cut their production output, which means their costs will rise or their revenue will fall, affecting their financials," Chen said.

"If they move their manufacturing base elsewhere, then there will be a period that they will need to book expenses at both old and new facilities, and these new costs will soon emerge," Chen said, adding that manufacturers may face additional uncertainties if their customers look for new partners to provide components to reduce potential risks coming from a possible supply shortage.

"Since Kunshan is only 15 minutes away from Shanghai by high-speed rail, and it is considered as part of the Shanghai metropolis, local officials basically want factories to leave," Wayne Tyan, vice president of Taiwan-based Chilisin Electronics, an affiliate of Yageo, a leading maker of passive components and an Apple supplier, said this month.

"The local government wants to transform the place into residential and commercial districts," Tyan said. Passive components include various resistors, inductors, coils and capacitors, which are tiny but essential parts used in all electronic devices.

"We think the notice at the end of 2017 was an alarm for everyone, and the regulator will definitely adopt stricter measures in 2018," he said, adding that local regulators visited his company's facility in Kunshan in 2016 to discuss whether it was possible for Chilisin's subsidiary to move elsewhere.

Suzhou, a city some 100km west of Shanghai, and the southern Chinese coastal cities of Dongguan and Shenzhen all face similar challenges to Kunshan, he said. His observation appeared to be validated this month when a Chinese official indicated that there will be other cities tightening controls on pollution.

"Companies [in China], including Taiwanese businesses, can understand why the mainland is taking steps to deal with pollution," said Ma Xiaoguang, another spokesman with China's Taiwan Affairs Office. "Some cities and provinces may take certain measures to limit pollution at certain times and seasons that are likely to see more pollution, and this approach eventually will help companies transform themselves, follow the pace of the mainland's economic transition, and achieve better results," Ma said to reporters on Jan. 17 in Beijing.

Tyan said Chilisin has relocated some production facilities to Vietnam and Malaysia and is now planning to move what is left in Kunshan to the inland Chinese province of Hunan, where regulatory issues regarding waste water are not as strict.

Career Technology spokesman Ken Wang told the Nikkei Asian Review that the company has been aware of the situation for some time. The company has plants in Kunshan and Suzhou. While Wang said he does not think authorities will completely shut down manufacturers soon, he said Career Technology is taking precautionary measures.

"To mitigate the consequences and to be more flexible in production, we will expand our manufacturing facilities in Taiwan rather than in these Chinese cities in the near term," he said, adding that the company is planning to raise $1 billion by issuing additional shares for the expansion.

Wang said Career Technology's U.S. customers have discussed tightening Chinese environmental regulations with the company, but he declined to comment on Apple specifically.

The chairman of Nanya Plastics, Wu Chia-chau, told the Nikkei Asian Review that his company's water emissions meet Kunshan's strict standards, adding that the company makes materials for Apple mainly in Taiwan. "However, a lot of midrange and small factories there would be forced to close down or move to somewhere else for sure," Wu said.

In response to Kunshan officials' efforts to tighten environmental regulations, an Apple spokeswoman in China pointed out that the company ranked No. 1 in the Institute of Public & Environmental Affairs' Corporate Information Transparency Index in 2017 for the fourth consecutive year. The Beijing-based institute is led by Ma Jun, a prominent Chinese environmental activist.

Apple's latest internal report on supplier responsibility further said that the company continued to step up efforts with its suppliers in 2016 to improve work conditions and environmental protection measures. It said its suppliers "demonstrated an improved ability to meet [Apple's] stringent standards."

The report said that the company's goal is to help its suppliers eventually have the capability to "independently uphold all labor and human rights protections, and maintain effective health, safety and environmental practices in their own operations." On his visit to China earlier in December, Apple CEO Tim Cook said a skilled workforce, rather than cheap labor, is what draws manufacturers to the country.   © Reuters

In addition to environmental issues, some hardware makers said it is becoming more difficult and expensive to hire enough qualified workers in Kunshan.

Companies need to pay at least 3,500 yuan ($546) a month to retain their production-line workers, said Chairman K.C. Liu of Taipei-based Advantech, the world's largest industrial personal computer maker. In 2017, the minimum wage in Kunshan was 1,940 yuan a month, up from 1,820 yuan a year earlier.

While component providers for Apple are struggling to meet tightening environmental regulations, assemblers of Apple's products are worried that they might not be able to secure enough employees in the coming years.

"More and more Apple suppliers are in the Kunshan area, and all of us are competing for production-line workers," an executive with an Apple supplier told the Nikkei Asian Review. "That really increases labor costs and adds a lot of pressure in hiring. For 2018, we think that we could suffer more from the lack of enough production workers during the peak season," this person said.

"It would be better if some of us can expand somewhere else rather than only in Kunshan. But it's really another headache for any of us to rebuild facilities elsewhere," the executive said.

Pegatron officials told analysts in its third-quarter earnings conference call in November that rising labor costs was a key factor that drove its gross margin to a record low of 3.4%.

But Apple Chief Executive Tim Cook said in an economic-development forum in the southern city of Guangzhou in early December that his company is in China for the workers' expertise rather than their relatively low wages.

Cook said there is "confusion" about China. "The popular conception is that companies come to China because of low labor cost. I'm not sure what part of China they go to, but the truth is China stopped being the low labor cost country many years ago," he said. "That is not the reason to come to China from a supply point of view. The reason is because of the skill and the quantity of skill in one location."