TAIPEI -- Apple now has more Chinese suppliers than ever before, as Chief Executive Tim Cook made his fourth public appearance in the country in a year to co-host a government development forum in Beijing that ended Monday.

Apple disclosed a list this month that showed its China-based suppliers surged to 27, up from only 19 in 2017, according to analysis by the Nikkei Asian Review. The number has almost quadrupled in the past six years.

The figures also mark the biggest year-on-year leap since Apple started disclosing the annual list in 2012. The list contains some 200 names and represents around 98% of procurement spending for materials and parts, manufacturing and assembly to make Apple products including iPhones, MacBooks and others from the previous year.

Chinese makers account for 13.5% of total suppliers, up 4 percentage points from 2017. It is unknown how much Apple spent on these China-based suppliers but some companies known for producing key electronic components have made their way onto the list of 200 suppliers.

For instance, some Chinese homegrown national champions that appeared for the first time on Apple's supplier list this year included BOE Technology Group, the country's top display maker; Jiangsu Changjiang Electronics Technology, the nation's No. 1 chip packaging and testing company and O-film Technology that Cook visited during his last trip in December. BOE Technology does not make screens for iPhones but provides displays for Macbook and iPads. It already ranks as the world's No. 2 TV display-maker after LG Display and is investing heavily to develop the next generation of organic light-emitting diode, or OLED, panels. iPhone X has OLED display for which Samsung Electronics is the sole supplier. 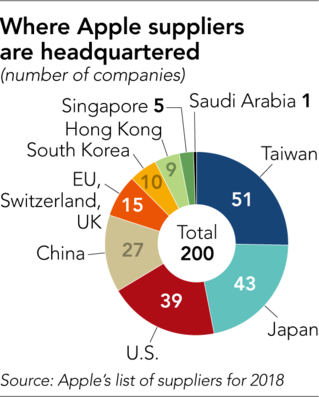 Among Chinese suppliers, Luxshare-ICT is the most notable. As a connector and cable maker first, it began to manufacture Airpods for Apple last year. The Chinese company wants to secure more orders from the U.S. brand to make more key components and is viewed as an emerging challenger for current key iPhone assemblers such as Hon Hai Precision Industry, better known as Foxconn Technology Group, and Pegatron. Luxshare first appeared in Apple's supplier list in 2013.

Over the past few years, many Chinese electronics companies have become competitive players through great state support and subsidies and thrive in a massive local market. Many of them later secured orders from Apple, a great boost for those originally little-known names in the global supply chain.

Whether Apple is under any pressure to buy more components from Chinese makers is unclear. But China is the only country that shows a significant year-on-year growth in the number of Apple suppliers in the past few years, according to analysis by the Nikkei Asian Review. If Hong Kong-based suppliers are added to the list of those from mainland China, the total rises to 36, or 18% of the total in 2018. On the other hand, the number of U.S.-based Apple suppliers fell to 39 companies from 43 in 2017.

Apple manufactured the majority of its products in China for export to other countries. As the most valuable American tech company becomes more dependent on Chinese suppliers, it is also bracing for trade friction between the U.S. and China.

President Donald Trump announced the U.S. will slap China with $60 billion tariffs to penalize Beijing for stealing intellectual property in high-tech sectors on March 22. China retaliated with its own set of penalties aimed at American imports. The trade friction highlights escalating competition for technological dominance between the world's two biggest economies. It's still not clear how badly the supply chain could be hit if the U.S. imposes heavy tariffs on technology products.

"What I have seen during my lifetime is that countries that embrace openness, that embrace trade, that embrace diversity are the countries that do exceptionally," Apple boss Cook said in a panel discussion on March 24 during the China Development Forum, an annual event that helps Western companies build connections with Beijing officials. He did not directly comment on Trump's administration and policies. On the other hand, Apple is striking a balance between its own country's interests and gaining market share in China, which contributed around 20% to its revenue in the October-December quarter. China is also its most significant manufacturing base.

It gave its laser component-maker Finisar $390 million to develop technology and hire more staff in Texas. Apple also vowed to contribute more than $350 billion to the U.S. economy and help create 20,000 jobs over the next five years.