BEIJING/TOKYO -- Chinese display maker BOE Technology Group is embarking on a 96.5 billion yuan ($15.2 billion) production expansion, but local governments will cover the lion's share of the cost, enabling the company to take on South Korean rivals at a time when China is looking to shift the nature of its economic growth to quality from quantity.

One part of this is a new production plant for organic light-emitting diode screens for such devices as smartphones that BOE announced Thursday. Located in the city of Chongqing, it will use the latest sixth-generation substrates. The company plans to bring it into operation by the end of 2020 and have the capacity to churn out 48,000 units a month.

The project will be BOE's fourth domestic OLED production facility, and construction is expected to cost 46.5 billion yuan. But the state-owned company will put up only 10 billion yuan of that, with the city of Chongqing paying 16 billion yuan up front.

Chinese smartphone shipments began to decline in 2017, and there is now a move among Chinese manufacturers to incorporate OLED screens that allow greater freedom in shaping smartphones in order to come up with products that appeal to consumers. Because the screen can also be used in other areas such as automobiles and notebook computers, BOE believes domestic demand for OLEDs will increase. There is even speculation that it is aiming to supply Apple.

BOE is also building a production facility in Wuhan that will produce liquid crystal display panels for televisions. The facility employ 10.5-generation glass substrates, the largest size available, for panels to be used in 65- and 75-inch TVs compatible with 4K and 8K broadcasts. However, BOE is shouldering only 6 billion yuan of the 46 billion yuan facility. The city of Wuhan and others will foot about 20 billion yuan of the bill.

Such companies as South Korea's LG Display and China Star Optoelectronics Technology have been preparing to use the 10.5 generation substrates, but judging that demand for the panels would increase as domestic sales of big-screen TVs grow, BOE -- China's biggest LCD panel maker -- started up the world's first 10.5-generation panel factory late last year in the Anhui Province city of Hefei. The Wuhan plant will add another 120,000 units to BOE's capacity when it goes into operation in 2020.

In addition, BOE is investing about 4 billion yuan to lift capacity at an assembly plant in the city of Suzhou that makes LCD TVs and monitors. The investment will lift annual output capacity to 20 million units from 12.3 million units, BOE said. 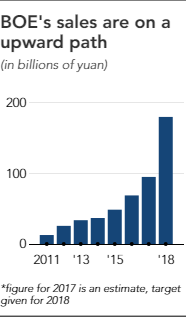 BOE's capital spending binge is a product of both market forces and national policy. BOE's government-backed strategy dovetails with policies laid out by President Xi Jinping's administration. The state is now championing a growth model that focuses on quality rather than quantity. The text announcing the Chongqing production plant says the project is "in harmony" with the government's goal of developing key industries.

On top of its investment, Chongqing will also provide tax incentives to BOE, allowing the group to expand output without taking on much risk. "For the most part, BOE's contribution amounts to no more than about 15% of total investment," said an analyst who follows the LCD panel market.

Meanwhile, the city of Fuzhou has forgiven BOE around 6 billion yuan in loans associated with an LCD plant there, according to local media reports. In January, a cooperation agreement with the state-policy institution China Development Bank was announced in which BOE will receive financial support for such purposes as funding new factory construction.

Meanwhile, BOE's earnings are skyrocketing. The Beijing-based company said it likely earned a net profit of 7.5 billion yuan to 7.8 billion yuan in 2017, or quadruple the level of 2016 and preceding years. A move to concentrate on value-added products has led to results. BOE is far from the only Chinese screen maker looking to widen its footprint. The country's five biggest players have said they plan to build new plants at a combined cost of more than $40 billion over the next three years. That activity puts China in a position to overwhelm international competitors.

South Korea's Samsung Electronics, the sole supplier of OLED panels for iPhones, aims to stave off the Chinese competition by investing to maintain a technological edge.

On the other hand, LG Display, Taiwan's AU Optronics and others who have overinvested in LCD panels for large-screen TVs are hurting under the Chinese pressure.

Because the government funding helps minimize depreciation expenses, Chinese competitors can flood markets as they crank up production, just as they have with solar panels, steel and cement. The resulting price drops sap the strength of Japanese, South Korean and Taiwanese competitors. Japanese manufacturers have been quick to withdraw from producing LCD panels for TVs, opting instead to specialize in smartphone screens through the Japan Display joint venture. But even in that field, Chinese rivals are quickly catching up.