DALIAN, China -- China's top two beer makers, China Resources Beer and Tsingtao Brewery, are preparing to raise their games to bolster their market positions, graduating from the low-cost strategies that have taken them this far.

China Resources Beer, the top ranking brewer in the world's largest beer market, is seeking to buy overseas brands and has introduced a new product that costs about four times the existing flagship products.

Together, the two companies hold over 40% of the Chinese market, but their market shares have been eroded in recent years by overseas rivals. While China's beer market is still the world's largest, it has been shrinking as the economy has slowed. It was a time to change.

China Resources Beer has rolled out its first upscale beer product, called SuperX, priced at 8 yuan ($1.26) for a 500ml container, about four times the price of its mainline products. While the company is retaining its low-cost Snow brand, it is not displaying its name on some products. CEO Hou Xiaohai said the company is targeting young drinkers with SuperX.

Hou has also confirmed his company was in contact with multiple, well-known foreign beer companies in Hong Kong in March, appearing to acknowledge reports that the company is negotiating to buy the Chinese operations of Dutch brewer Heineken.

Heineken's share of China's overall beer sales is 0.5%, putting it in 10th place. The upscale beer segment represents less than 10% of the market by sales, according to U.K. research company Euromonitor International. Hou said China Resources Beer seeks to expand into the higher-end segment to fill the company's need for an upmarket brand. 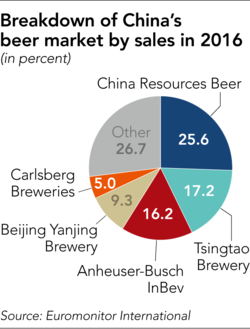 A relative newcomer founded in the early 1990s, China Resources Beer quickly rose to overtake established rivals such as Tsingtao, taking the top position by exclusively pursuing a low-cost strategy. It grew by winning customers in rural areas, buying up local companies that had products mainly in the lower price range.

As a result, its lineup of products normally cost 2 yuan to 3 yuan per 500ml bottle.

This was not a problem when the Chinese economy was thriving and the beer market was expanding steadily year by year. But after growth began slowing and the market peaked in 2013, China Resources Beer posted a net loss in the year ended December 2015. It was forced to sell its slumping retail business and focus on beer production in the following year, but profits still dropped.

The shrinking market also hit Tsingtao, whose revenue and profit fell for the second consecutive year through December 2016.

At the same time, China's consumer tastes have been maturing toward a preference for quality over quantity, and to foreign beer brands that cost about 10 yuan each and offer a variety of tastes. This has been driving local beer makers to move up from their low-cost approach.

In January, Tsingtao introduced an ale, a beverage that is still relatively rare in China, and which is produced with a different brewing process. A subsidiary has also marketed an alcoholic product intended to be mixed with fruit juice or other nonalcoholic ingredients to make cocktails.

The company also brought out a wheat beer to expand its high-end lineup, which now represents about 20% of its overall sales by volume, a level the company considers to be thin.

The beer market shrank for the fourth consecutive year in 2017, but both companies managed to increase revenues and profits thanks to improved sales in products in the medium and higher price ranges, suggesting their strategy shifts are paying off.