TAIPEI -- The Taiwanese telecom affiliate of key iPhone assembler Hon Hai Precision Industry is partnering with Nvidia to offer a cloud computing service on the island.

The move comes as the world's largest contract electronics maker, better known as Foxconn Technology Group, is looking at a saturated smartphone market and for new streams of income.

Foxconn unit Asia Pacific Telecom has set up a data center in the southern Taiwanese city of Kaohsiung and equipped it with servers that use Nvidia graphic chips. The setup offers superior computing power that can handle complex tasks such as image and video processing, Chairman Lu Fang-ming said.

"We are offering computing as a service," Lu said, "and a number of areas we are focusing on include medical care, scientific research and the kind of graphic rendering used in film production and gaming." 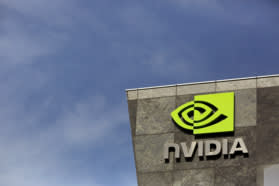 APT is a small player in Taiwan, with some 1.7 million mobile subscribers, compared to market leader Chunghwa Telecom's 10.5 million.

Lu said all the servers at the new data center are made by Foxconn subsidiaries and affiliates. The chairman declined to disclose the amount of initial investments made to get the facility up and running. He also remained mum on the first-year revenue target for the data center business.

In recent years, Foxconn's smartphone assembly operations have been grappling with thin margins. Apple accounts for more than 50% of Foxconn's total revenue, but the Taiwanese manufacturer also makes Android handsets.

As it seeks growth elsewhere, Foxconn has invested in various startups, including China's ride-hailing service Didi Chuxing. It has also been trying to boost its other consumer electronics businesses, including TVs and home appliances, through Japan's Sharp Corp., which the company acquired in 2016.