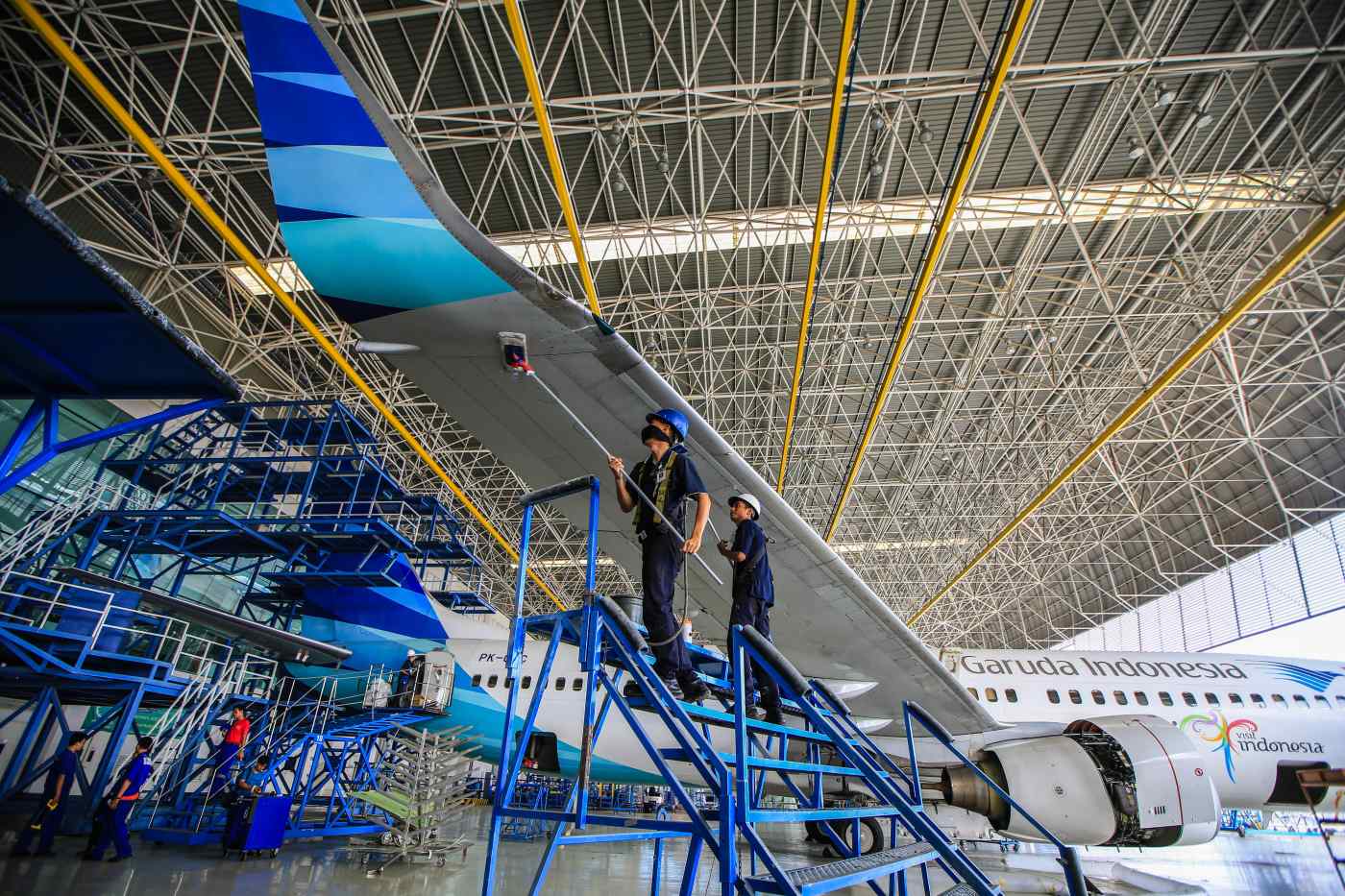 BANGKOK -- Flag carrier Garuda Indonesia plans to build a hangar in the United Arab Emirates to extend its international reach in aircraft maintenance, a business that is shaping up as a promising income stream for the troubled airline.

Garuda Maintenance Facility AeroAsia, a subsidiary that went public in 2017, is seeking a joint venture with a local non-airline partner in the UAE. A deal is expected to be signed by the end of the year, with operations to start by around 2020, GMF AeroAsia CEO Iwan Joeniarto told the Nikkei Asian Review in a recent interview.

Although the Middle East is a vital air transit hub, home to "super-connectors" like Emirates, the region has a lack of aircraft maintenance, repair and overhaul facilities owing partly to high labor costs, Joeniarto said.

Engineers and technicians will be hired from countries such as Indonesia, Pakistan, Bangladesh and the Philippines to keep labor costs low.

GMF AeroAsia operates four MRO facilities, including the world's largest narrow-body aircraft hangar, at Soekarno-Hatta International Airport outside of Jakarta. But the company wants to expand its MRO footprint beyond its home country to do more business with airlines other than state-owned Garuda, which owns nearly 90% of GMF AeroAsia. It has earmarked $400 million for facility expansions over the next five years.

Earlier this year, the company signed a memorandum of understanding with South Korean aircraft leasing firm TWA Aero to build a maintenance and repair facility in that country. The two partners are now conducting a feasibility study on that project.

A hangar on the Indonesian island of Batam, around 1,000 km north of Jakarta, is also under development. Plans are expected to be finalized by the end of the year, with the start of operations set to follow in 2020.

"Batam will be an alternative for customers that currently come from Japan, South Korea, Thailand or Vietnam, because it is not as far as Jakarta," Joeniarto said. Surabaya, located on the eastern side of Java island, is another location where the company is eyeing expansion to win Australian customers.

Amid troubles at parent Garuda, which reported a loss for 2017 and confirmed delaying all aircraft deliveries for 2018, GMF AeroAsia is increasingly turning to other airlines for large MRO contracts.

The company aims to have non affiliated airlines account for 60% of overall revenue in two to three years, Joeniarto said, up from 37% in 2017.

Garuda, meanwhile, is banking on the MRO business as a new revenue stream to supplement its sluggish commercial airline business, which faces intensifying competition from low-cost carriers. GMF AeroAsia depends on parent Garuda for most of its maintenance and repair business.

Joeniarto, who also sits on the Garuda board, said the group wants to become like Germany's Lufthansa by expanding noncore operations. With a sizable business with non-affiliated airlines, Lufthansa's MRO unit accounted for roughly 15% of group revenue in 2017, making it the second-largest contributor, after group airlines.

GMF AeroAsia hopes annual sales will reach $500 million in 2018 from $439 million in 2017. Looking further ahead, it aims to double sales to $1 billion by 2022, with a majority of the growth coming from low-cost carriers, Joeniarto said.

The good news for GMF AeroAsia is that Asia's aircraft demand is surging. Of the 41,030 new aircraft projected to be delivered worldwide from 2017 to 2036, 39% will go to the Asia-Pacific region, according to Boeing. This demand is mainly being driven by budget airlines, which tend to outsource maintenance operations.

In Southeast Asia, Singapore has long been the dominant MRO hub serving full-service carriers. But with cheaper labor costs, more land and a promising domestic market, Indonesia can emerge as an alternative for low-cost carriers, GMF AeroAsia believes.

In 2015, the company opened the world's largest hangar for narrow-body aircraft. Built on a space of 60,000 sq.-meters, it can accommodate up to 16 aircraft. Clients include Garuda budget airline Citylink, Malaysia's AirAsia  and India's IndiGo.

Some of the larger budget airlines have their own maintenance units, but not many have a full line of service. Indonesia's Lion Air, for example, is expanding its own hangar but still depends on GMF AeroAsia for heavy overhaul work.

GMF AeroAsia also offers engineer training for airlines in the region. In 2013, European aircraft maker Airbus certified the Indonesian company as a maintenance training center for narrow-body A320 and wider A330 jets. Only GMF AeroAsia and Singapore Airlines are certified by Airbus in Southeast Asia.

Indonesia is expected to overtake Singapore in MRO spending by 2027 to become the leader in Southeast Asia, according to research firm Frost & Sullivan. Indonesian MRO spending is projected to nearly double to $2.1 billion from the 2017 figure of $1.1 billion. In Singapore, the figure is forecast to increase by roughly 40% to $1.7 billion over the same period.