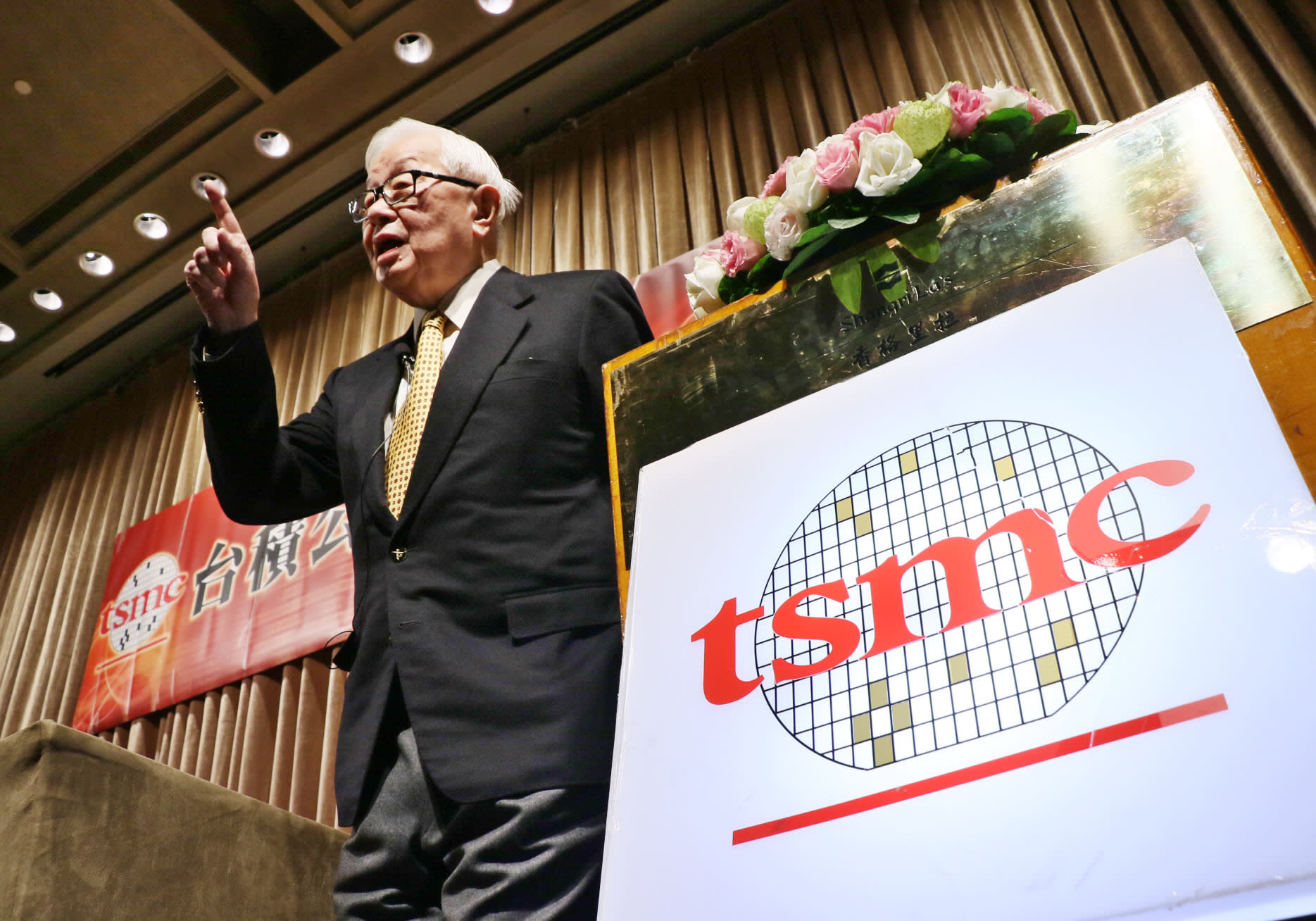 TAIPEI -- For a decade, Pua Khein-seng had been reluctant to locate any of his company's operations in China. The Malaysian-born founder and chairman of Phison Electronics, Taiwan's No. 3 integrated circuit designer, feared technology leaks and headhunters poaching his employees. But in early 2015, he established a foothold on the other side of the Taiwan Strait, setting up a subsidiary in the city of Hefei.

His change of heart was triggered by the sense that he had to do something, and fast, to secure a piece of the massive mainland market. "Despite some risks, you only have two options at this point: join the big market, or walk away and give up on it," Pua said. "The door will shut for latecomers once China has managed to build its own chip industry."

And the clock is already ticking. In its race to foster a domestic chip industry, China has been snapping up companies around the world.

Pua is not the only one who feels companies cannot afford to ignore the Chinese market. Taiwan Semiconductor Manufacturing Co., the world's largest contract chipmaker, announced in early December that it is investing $3 billion to set up a wholly owned facility in Nanjing.

Chairman Morris Chang said TSMC is building the plant to "enhance access" to the local market. "The U.S. and China are two very different countries," he said, implying that a local production base is crucial for establishing a foothold in China.

Taiwan's Jan. 16 elections saw the pro-independence Democratic Progressive Party oust the ruling pro-unification Kuomintang (KMT), or Nationalist Party. But this historic power shift does not come at an easy time in terms of the economy and overall business environment.

The island's gross domestic product is estimated to have grown only about 1% last year, and the contraction in the third quarter was the first since the third quarter of 2009. Years of stagnant wages and real estate prices higher than most citizens can afford combined to foster widespread distrust in outgoing President Ma Ying-jeou's policy of strengthening ties with the mainland in order to buoy the economy. Many Taiwanese voters also feared Ma's approach would give Beijing an outsize influence on Taiwan's economy and politics.

Indeed, the biggest factor weighing on the Taiwanese economy is the slowdown in China. With more than one-fourth of its exports going to China, the island is extremely vulnerable to the ups and downs of the world's second-largest economy. Cross-strait trade for the 10 months through October 2015 came to $96.4 billion, down 10.6% from a year earlier.

In the eight years since Ma was elected, cross-strait exchanges picked up and political friction receded. Some observers have said relations are the best they have seen in six decades. But there is bad news, too.

"Taiwan's economy relies more heavily on trade than it did 10 years ago, with nearly 70% of its gross domestic product coming from exports," said Gordon Sun Ming-te, director of the Macroeconomic Forecasting Center at the Taiwan Institute of Economic Research. "That makes the economy extremely volatile if any of its large trade partners, like China, show signs of slowdown."

Taiwan has another worrying dependency: The information technology industry makes up almost 17% of its GDP, and most of it comes from hardware manufacturing. The threat of emerging mainland technology manufacturers is spurring Taiwanese tech companies like Phison and TSMC to expand their footholds on the continent.

Examples of the increasingly harsh competition can be found in various segments of  the industry. China's BOE Technology Group churned out more large-sized panels for TVs than Taiwanese maker AU Optronics for the first time in 2015, overtaking AUO as No. 4 in terms of global TV panel shipments, according to research company WitsView.

TPK Holding, a touch module supplier to Apple, reported a record loss of 19.39 billion New Taiwan dollars ($576 million) for the third quarter amid a supply glut caused by the proliferation of competitors across the strait.

Simplo Technology, the world's leading battery module maker and a key supplier for Apple's iPhone, is losing significant market share to advancing Chinese peers Desay Battery and Sunwoda Electronics. "The technology for batteries used in smartphones is simpler than for those used in notebooks," said Yang Chia-hao, an analyst at the Taiwan Institute of Economic Research. "The Chinese market served as a test bed for Chinese neophytes and has provided them with the momentum to take off quickly."

Taiwan-based MediaTek, the largest smartphone chip supplier to China, also suffered from price cuts of up to 40% by its rival, Shanghai-based Spreadtrum Communications. "Looking forward to 2016, we face serious pressure on the company's gross margin," Vice Chairman Hsieh Ching-jiang told reporters at the end of 2015.

The challenge, then, for President-elect Tsai Ing-wen is to strike the right balance between maximizing the benefits of cross-strait economic links while minimizing the potential risks of excessive dependence on IT exports to China.

The benchmark Taiex index rose 0.63%, to 7,811.18, on Jan. 18, the first trading day after the election. Prior to the poll, the index had fallen almost 22% from its peak of 9,973, logged on April 27, 2015. The drop was due mainly to growing concerns about the Chinese economy, but concerns of a possible deterioration in cross-strait relations under a DPP government also played a part.

The good news is there seems to be bipartisan consensus for a transformation of Taiwan's industrial structure.

John Deng, the outgoing minister of economic affairs, said most Taiwanese business players are well aware of the need for change. "What we need is differentiation from Chinese competitors," Deng said. "It's never going to be sustainable if companies just keep cutting prices and mass-producing low-cost, standardized hardware products."

Tsai also seems aware of the need for an industry shakeup. She presented to voters a plan for nurturing five key industry clusters located around the island, including renewable energy, biotechnology and defense, to diversify Taiwan's economic structure. She is also calling on local companies to drive innovation in next-generation IT, such as the Internet of Things. 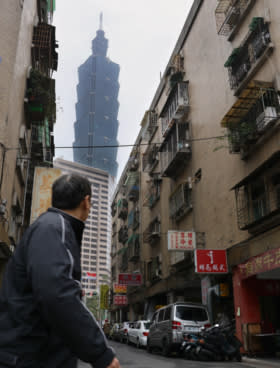 The landmark skyscraper Taipei 101 towers above apartment buildings in the Taiwanese capital. (Photo by Shinya Sawai)

There is a concern among global investors that progress on cross-strait trade agreements, held up since student protesters occupied Taiwan's legislative chamber in March 2014, could remain frozen under the Tsai administration. "This [election result] will have a negative impact on the confidence of foreign investors, dampening the incentives for foreign firms to invest in Taiwan and use it as a gateway to access the mainland market," said DBS economist Ma Tie-ying.

"Taiwan's lack of bilateral free trade agreements with its key trading partners raises the cost of being outside the Trans-Pacific Partnership," said Bank of America Merrill Lynch analysts in a December report. "We think Taiwan is particularly vulnerable to China-led pressures compared to other trade-dependent economies, most notably [South] Korea."

According to outgoing minister Deng, some of Taiwan's trading partners are reluctant to pursue new trade agreements with the island for fear of provoking a negative reaction from Beijing. "If we can manage to sign trade agreements with China first, other counties would not be too concerned about the China factor when they negotiate with Taiwan," he said.

To address this issue of strengthening ties with non-Chinese trading partners, Tsai seems set to tackle the multilateral side first. She has indicated that her administration may lift the ban on imports of U.S. pork that contains growth-boosting additives. The relaxation, if implemented, would likely improve Taiwan's chances of joining the TPP.

"Tsai is inclined to strengthen Taiwan's ties with the U.S. and Japan, distancing [Taiwan from] the mainland a little bit by looking for trade partners outside China," said Sun of the Taiwan Institute of Economic Research. "Participating in talks for the U.S.-led TPP will likely be her first priority."

For Taiwan, economic self-sufficiency is a prerequisite for practically pursuing political independence. A healthy economy is also essential for maintaining strong voter support for the new administration, something vital in pursuing any kind of foreign policy agenda. Tsai's inauguration is set for May, but the viability of her economic policy is already being put to the test.