Infosys' Sikka walks the bleeding edge in push for IT primacy MUMBAI -- When Infosys co-founder Narayana Murthy introduced Vishal Sikka as the new chief executive of his troubled company in June 2014, he half-jokingly said that Sikka's name was a good omen. 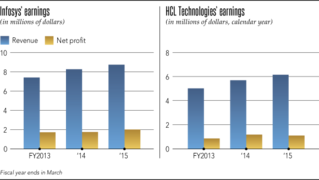 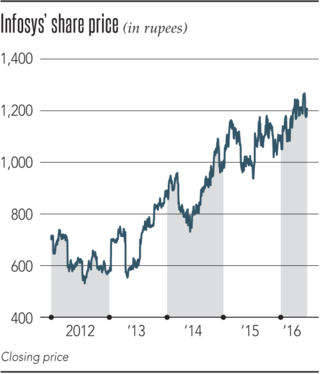 Fast forward to 2016, and it seems there might have been something to Murthy's quip. Sales are once again growing at a double-digit pace. Stock investors and analysts seem convinced that Sikka will further sharpen Infosys' competitiveness.

The surge put Infosys' growth on a par with that of Tata Consultancy Services -- India's top IT services company by revenue and market capitalization -- which posted a 16.7% revenue jump for the latest fiscal year.

Since Sikka formally assumed the position in August 2014, he has continually set ambitious quarterly targets. And the company has been beating them quarter after quarter.

Infosys' stock has risen as much as 40% since Sikka became CEO, outperforming all of its major domestic rivals. TCS gained 6% during the same period, while Wipro rose 5% and HCL Technologies declined slightly. Infosys' share price is back to roughly 20 times its latest annual earnings-per-share figure -- about the same P/E multiple as TCS.

While his name may have presaged prosperity, there is nothing mystical about Sikka's approach to running the company of nearly 200,000 full-time employees. He has simply sought to fix problems, one by one.

Early on, Sikka reviewed Infosys' 1,000 largest client accounts. He looked at several factors: what the company was doing to satisfy each customer; how much revenue and profit each account was generating; how the teams working on each account were functioning; and so on.

Infosys is known for customizing and managing software for big-name businesses such as Accenture, Apple, Bank of America, Deutsche Bank and IBM. Sikka took charge of renegotiating contract terms and projects with some of the company's largest clients.

Internally, Sikka succeeded in decreasing the attrition rate and improving both productivity and project quality. The key was what the company calls the "Zero Bench" initiative, which ensures that employees are put to productive work rather than waiting "on the bench" for an assignment. Infosys says the initiative led to an additional 12,000 new assignments in the year ended March. Sikka's improvements have propelled Infosys back into the race with TCS. But this brings him to the real test -- going head to head with the No. 1 player. Infosys' and TCS' similar P/E multiples indicate that investors expect the companies to grow at a comparable pace.

Infosys' board, for its part, clearly has confidence in Sikka's capabilities. In February, it decided to extend his tenure by two years, to 2021, even though he still had three years left according to the original plan.

In response, at his first appearance before shareholders after the board's decision, Sikka declared his determination to transform the company from a labor-cost-arbitrage contractor to a technology-based solutions provider. He stressed the importance of automated software-building and artificial intelligence -- rather than manpower -- as the key drivers of this shift.

"We must become a company that delivers innovation," Sikka told shareholders on June 19. "The world [of IT services] as we knew it has been transformed."

Traditionally, the IT services sector has been labor-intensive. Indian players have taken advantage of the country's low labor costs and abundance of software engineers. Since they have generally used the same formula for growth, differentiating factors have tended to be subtle -- say, a slight advantage in talent level or better project management skills.

Now, programming automation and AI are changing the rules of the game.

Raja Lahiri, a partner at Grant Thornton India, noted that relatively simple IT jobs such as monitoring and maintaining systems, coding programs and fixing bugs are increasingly being done by computers.

And AI -- with machine learning and big data analysis at its core -- is starting to replace consultants in locating, collecting and analyzing text information and numerical data.

So the industry is entering an era in which IT systems will update themselves, automatically adapting to changing business needs. Clients will increasingly judge IT service providers on their technological chops instead of the cost and quality of their human resources.

Put another way, the competition is going to come down to killer technologies.

The transition is already underway: The National Association of Software and Services Companies, or Nasscom, forecasts a 20% annual drop in recruitment by IT companies in India for the current fiscal year through March 2017.

Infosys' headcount is unlikely to drop anytime soon. In the year ended March, it actually increased by 10%, to 194,044. Sikka said he is committed to helping engineers adapt to the new technologies. "It is why we focus on education and learning," he said.

Apurva Prasad, an equity research analyst at Reliance Securities, reckons Infosys is currently the front-runner in the shift to automation and AI, citing its engineer training and the quality of the deals it is winning. "With the new CEO, there is more clarity as to which way the company is heading," he said. "These are still early days, but currently Infosys is better placed, although TCS, of course, is close enough."

Prasad chalked up Infosys' strong position to "the Sikka effect."

The trend toward competing on innovation, rather than labor capacity and efficiency, is driving IT companies to adopt more outside technologies. In this regard, Sikka's Infosys has also been quite proactive. Since 2015, Infosys has made a string of acquisitions: Israel-based automated software testing service provider Panaya, U.S.-based energy consultancy Noah Consulting and U.S.-based mobile-commerce platform provider Skava. It has also set up a $500 million fund for investing in startups, splitting the budget equally between domestic entrepreneurs and overseas ventures.

Wipro in March bought HealthPlan Services, an online health insurance marketplace in the U.S., for $450 million. The company said it wanted to boost its cloud-based business process services. Last year, it bought into Viteos, a U.S. investment fund administration services provider, for the same purpose.

"We will continue to carefully deploy our capital on innovative companies that are inventing the future," Sikka said. "We will not buy revenue or 'market share' in markets of yesterday."

Sikka has set ambitious targets that hinge on a successful transition from a labor provider to a technology provider. By the year ending March 21, he is aiming for $20 billion in revenue, with a 30% operating profit margin and per-employee revenue of $80,000.

Looking at the industry sea change, DD Mishra, research director at Gartner India, said, "Possibly this is one of the most exciting phases of the journey the Indian IT industry has made so far." Sikka's challenge will be to ensure that Infosys leads the way down this new path.