Rivals working with Taiwanese partners to challenge US chip group TAIPEI -- Intel, the world's largest semiconductor company, is under siege again. Having missed out on the mobile boom over the past decade, it now faces rivals pushing into personal computer and server markets, challenging the chip group's longtime leadership in these areas.

For now, Intel is still in relatively good shape. More than 80% of PCs in the world use its core processors, which contributes to 55% of the Santa Clara, California-based company's revenue even though the rise of mobile devices has led to a slump in PC demand.

The U.S. chip kingpin further enjoys a near-monopoly in the server chip field, a fast-growing area offering better margins than PCs, where it has a market share of more than 98%. 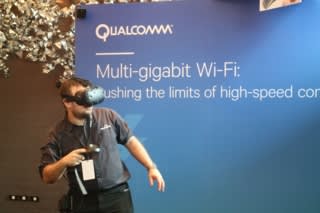 World No.1 mobile chip provider Qualcomm said it would enter the PC market to take on Intel. (Photo by Cheng Ting-fang)

But this could change, with chipmakers ARM, AMD, Nvidia and Qualcomm all highlighting plans to get into PCs, servers or both during Taipei's annual Computex tech expo that took place in the past week.

The SoftBank-owned British chip innovator ARM has overpowered Intel in the mobile age, and now it wants a piece of the PC chip group's pie as well, at a time when growth in the smartphone market is softening.

Ninety per cent of mobile devices in the world, including smartphones, tablets and wearable items, use ARM's chip architecture, known for their power efficiency.

ARM licenses its chip architecture to others, and many major global tech companies including Apple, Qualcomm and Samsung then create their own mobile processors using the British company's designs.

Qualcomm, the world's No.1 mobile chip provider, announced for the first time during Computex that it would partner with ARM to offer core processors for PCs.

Qualcomm and ARM have no presence in the PC market yet, but they may undermine Intel's dominance when leading PC brands including HP, Lenovo Group and Asustek Computer release products using Qualcomm processors before the end of this year.

The Qualcomm-ARM camp's new venture has even received support from Microsoft, once Intel's key partner in the PC era, when the term "Wintel" was almost synonymous with PCs, in reference to Microsoft's Windows software.

"We are targeting the thin-light, convertible, attachable [laptops], which is one of the only growing sectors in the PC market," Qualcomm Vice President Don McGuire told reporters in Taipei in a joint press conference with a Microsoft executive on May 31.

McGuire boasted that his company's latest Snapdragon 835 chip, its flagship product for premium smartphones and PCs, could increase battery life by 50%, while being 30% smaller than Intel's product.

The Qualcomm executive said that his company would engage with even more PC makers such as Dell, Fujitsu, Toshiba, and Panasonic in the future to grow its businesses.

Meanwhile, President Rene Haas of ARM's intellectual property group said there was a lot of growth potential in the PC market and anything "over the zero percent" would be good for his company.

"The industry needs competition," he said, though he added it would take a while to see whether "Windows on ARM" will succeed.

The ARM-Qualcomm camp's ambitions are stretching beyond the declining PC market.

Data centers are essential infrastructure for big tech companies such as Facebook and Google to gather and analyze data to grow next-generation technologies including artificial intelligence and driverless cars.

ARM is targeting 25% of the data center server chip market by 2021, according to Haas.

The ARM executive said major tech companies were looking for "more choices" and his company is working with every potential customer such as Google, Amazon and Facebook. Microsoft said in March it was testing ARM-based server processors internally.

Meanwhile, Taiwan Semiconductor Manufacturing Co., the world's largest contract chipmaker, is making ARM-based products for both PCs and servers with the latest cutting-edge technology to ensure best performance, according to Mark Li, an analyst at Bernstein.

By contrast, Intel mostly makes its chips itself.

Even AMD, Intel's smaller rival in the PC market, wants to compete in the server business.

AMD Chief Executive Lisa Su told the Nikkei Asian Review on the sidelines of a Computex event that her company was aiming to secure "some double-digit market share in the server market in a few years." 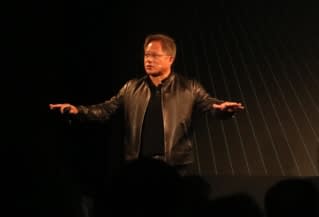 Nvidia's founder and CEO Jensen Huang has been nicknamed the 'AI Godfather'. (Photo by Cheng Ting-fang)

Nvidia's technology is now widely used in the new type of data center servers that handle massive amount of images and videos to deal with artificial intelligence related computing. While core processors are still an indispensable part of a server, the growing use of Nvidia technology means servers in the future might require fewer Intel chips to run.

Nvidia CEO Jensen Huang said that graphics computing for data centers was the fastest-growing business for his company.

"Almost every network that you can think of, any artificial intelligence network, runs perfectly on our [graphic processing unit]," Huang told a small number of reporters on May 31.

Gregory Bryant, Intel's corporate vice president and general manager of the client computing group, told the Nikkei Asian Review in an interview on May 3o that there had been some recovery and growth in the high-end PC market, where Intel has an edge.

"There has been silicon competition for many years. The key for us is to focus on the right value factors and deliver the best products," said Bryant. He did not specify strategies to defend the company's market share.

For all of 2016, Intel's revenue grew more than 7% to $59.4 billion thanks to growing orders to make modem chips for Apple and healthy demand from high-end gaming computers, while its net profit fell 10% from a year ago to $10.3 billion.

The company's data center server business only expanded some 8% from a year ago, below the company's goal of double-digit percentage growth, due to stagnant enterprise demand.

Data center servers, however, is still the most profitable unit, accounting for 58% of the company's operating income of $12.87 billion.

While rivals are charging into Intel's turf, it may take a while for them to catch up, and the U.S. chip group may want to use the opportunity to focus on products with better margins, according to C. Y. Yao, an analyst at Taipei-based research firm TrendForce.

"Growth of Intel's highly-profitable server chip unit is slowing, but if nothing goes wrong, it will still take some years for ARM to build a complete ecosystem around data center servers to really pose threats to Intel," said Yao.