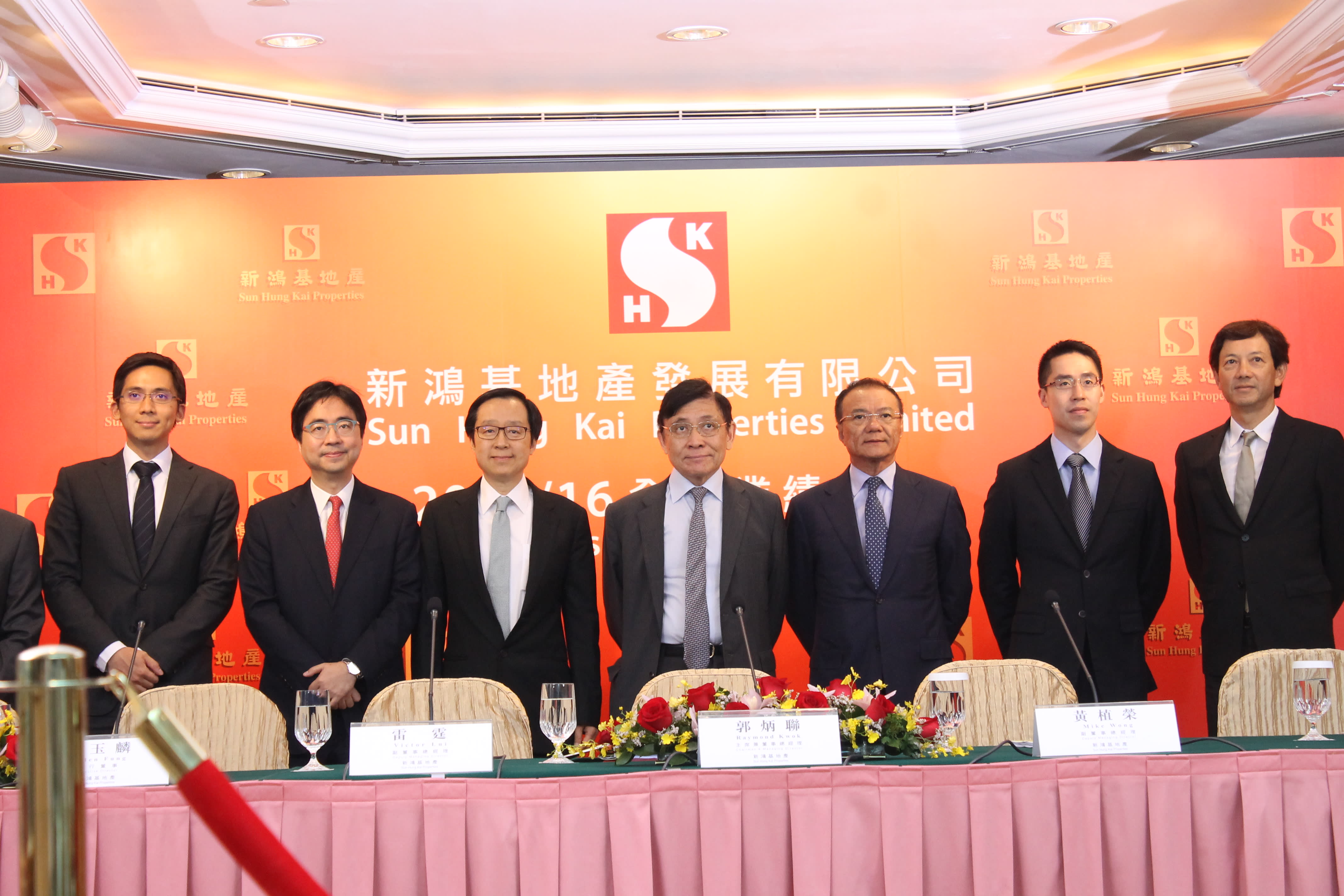 The territory's largest developer by market capitalization, Sun Hung Kai, is controlled by the Kwok family and has interests spanning properties in mainland China, public transport and telecommunications.

In a rare move on Thursday, Chairman Raymond Kwok Ping-luen introduced the group's third-generation leadership -- his son Christopher Kwok Kai-wang and nephew Adam Kwok Kai-fai to a hall of reporters, just months after his brother Thomas Kwok Ping-kwong walked free from jail pending a final appeal next May against his conviction in a high-profile corruption scandal.

Christopher was named as an executive director in April, following Adam's entry into the boardroom in 2014. Describing both as "hardworking and curious," Chairman Raymond Kwok noted that the two men had made progress in their work. "I am confident that they will catch up with the company's business," he said. "We are taking it step by step."

Asked about his brother Thomas who resigned as co-chairman after he was sentenced for bribing a former official, Chairman Kwok said the former would not be able to return to work before the appeal but stressed that the brothers often dined with matriarch Kwong Siu-hing, their 88-year-old mother.

Some observers said that Thomas would still influence the group as a consultant behind the scenes, although a spokesman confirmed to Nikkei Asian Review in July the former co-chairman would not play any role in the group's operations.

Chairman Kwok's remarks come at a time when the developer is trying hard to deflect cynicism over its weak corporate and family governance, and turn investors' attention to its strong business performance.

Its net profit for the year ended in June climbed to 32.66 billion Hong Kong dollars ($4.2 billion), up 5% on the year. Underlying profits excluding the impact of property revaluation rose 22% to HK$24.17 billion, helped by a steady rental growth of 7% and strong sales of new projects such as Park YOHO and Ultima.

Sun Hung Kai is among the most aggressive in targeting homebuyers this year, offering home loans of up to 120% of a property's value. Such borrowers have to post their flats as collateral. It achieved record contracted sales of HK$40 billion during the period, far exceeding its annual target of HK$32 billion that was previously adjusted downward due to global economic woes.

The group said that it had a land bank sufficient for development over the next five years, with a stronger focus on small- to medium-sized residential flats. But a growing supply of shoebox-sized units in the territory have drawn criticism as another sign that housing affordability has deteriorated.

"The trend is to cater for market changes and social changes," said Deputy Managing Director Mike Wong Chik-wing, justifying his group's approach, adding that the average family size in the territory has become smaller.

Hong Kong's home prices have declined 8% from the historical peak in September, but appear to have stabilized since April. Fitch Ratings said in a Sept. 5 note that further price corrections were still "plausible," as property prices had nearly doubled since 2010, buoyed by strong investment and low mortgage costs.

Others see it differently. Daiwa Capital Markets expects home prices to edge up 1% on the year for 2016, significantly up from its earlier forecast of a 10% fall. "The decline in residential property prices... has been an adjustment rather than a meltdown, and that adjustment is now over," wrote Daiwa analyst Jonas Kan on Sept. 6.

Daiwa noted that pent-up demand for homes was only "suppressed" but not removed with the government's cooling measures in place. While a number of property stocks were already up 30% in value from their January lows, the brokerage predicted a second leg rally for the sector.

Looking ahead, Victor Lui Ting, Sun Hung Kai's other deputy managing director said: "Overall, with a stable economy in Hong Kong, prevailing low interest rates and income growth, the [housing] market can be sustained in a healthy and stable manner over the next one to two years."

Sun Hung Kai's shares closed 2.3% higher at HK$120.8 on Thursday, before its earnings were announced. They have risen 28% since the start of the year, outperforming the Hang Seng Index's near-9% gain.