SINGAPORE -- Sunny Verghese, co-founder and CEO of Olam International, a Singapore-based commodities trader, knows Africa like no one else in the field. Starting with a cashew trading business in Nigeria 26 years ago, he has built up a commodities-sourcing and -processing network across the continent. Now he is looking at Africa again -- as a consumer market about to blossom.

Making the most of the opportunity will not be easy. To gain financial support for his long-term goals, Verghese made a decisive move in August, joining hands with Mitsubishi Corp., welcoming the Japanese trading house as Olam's second-largest shareholder. To underscore the partnership, Verghese announced on Nov. 13 a joint venture would be formed in Japan.

"We see Mitsubishi as a long-term strategic partner," Verghese said, calling the deal an "important next step" in aligning his goals with a set of like-minded shareholders. For Mitsubishi Corp. and its 20% stake, Olam is the gateway to Africa, an untapped market for the Japanese commodities giant. 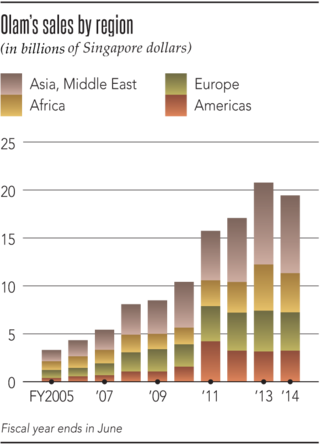 Despite Olam's rapid expansion during the past 26 years, the India-born Verghese lacks a gung-ho demeanor. Born to a middle-class family in Kerala, in South India, his petite stature, calm eyes and ready smile hardly present the image of an over-zealous deal-maker with global ambitions.

In fact, Verghese's expansion strategy has always been a careful one, similar to planting one seed after another in a field.

Risk management has been Olam's modus operandi since its beginnings. Verghese set foot in Africa in the mid-1980s, when he was sent to Nigeria by the Indian conglomerate Kewalram Chanrai Group to run its cotton business. Verghese saw an opportunity when the Nigerian government liberalized commodities trading as a means to boost its nonoil exports. Nigerian exporters had little knowledge of risk management mechanisms and would often default on contracts. "We felt that if we set up a reliable procurement network," Verghese said, "and delivered goods in a reliable and consistent way to customers in the developed world, we could establish and grow that business." Nigeria was where he nurtured the "blueprint in my mind to start Olam." There, he led the vertical integration of Kewalram Chanrai's cotton operation for four years, setting up plantations and processing facilities to rely less on imports for raw materials. He learned local integration better manages risks by fending off currency and other volatile markets.

He founded his own company in 1989 along with his basic strategy -- integration in selective businesses. The name Olam is derived from a Hebrew word meaning "to transcend boundaries."

"We integrate based on where the profit pool is," Verghese said. "And [by always] asking ourselves the question, 'Can we win if we go upstream or midstream?'"

Olam now boasts a portfolio of 44 products in 65 countries, 24 in Africa. Starting with cashews, Verghese ventured into "neighboring" products like almonds and hazelnuts, eventually expanding into high-demand commodities like cocoa and coffee. Olam today is the world's leading supplier of cashews and sesame seeds as well as the largest trader of cocoa. The company sits among the top three global suppliers of coffee.

There have been some lumps along the way.

In the 1990s, Olam was lured by a Singaporean government agency to set up a base in the island nation. With attractive tax incentives and plans to set up operations in Asia, Verghese moved Olam's headquarters from London to Singapore in 1996, eventually listing its stocks on the Singapore Exchange and welcoming Temasek Holdings, Singapore's sovereign wealth fund, as a major shareholder.

In 2012, Olam was hit by its greatest crisis -- it came under attack by short-seller Muddy Waters, which accused Olam of irregular accounting practices to boost its bottom line. Olam's share price slumped over 20% soon after the accusation.

"This whole bogy of trying to say that we have some kind of liquidity crisis cannot be corroborated," Verghese said at a press conference soon after the attack. But his manner was calm, as usual, and he showed little sign of stress. Verghese thanked Temasek for retaining its stake, calling the state fund's gesture "the biggest support I can ask for."

Later, Temasek came to Olam's rescue by increasing its stake, at one point controlling over 80% through a consortium led by a Temasek-owned unit -- a move that reflected the state fund's support for Olam's long-term plans to invest and build up its business. 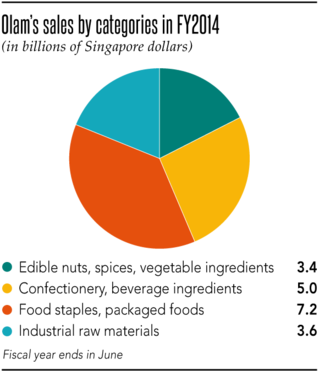 With the added stability of long-term shareholders, Verghese is aiming big. "In the past, we followed an approach called 'string of pearls,' where we do a chain of small-scale acquisitions," said Verghese. "Going forward, we will do fewer acquisitions, but we will do larger ones."

Verghese would not elaborate but hinted upcoming investments will be made in Africa. He said Olam's packaged food business in Africa has "built a strong distribution network" over the past eight years by leveraging the company's existing channels for rice and other staples.

These channels, it should be noted, have been built on a continent known for its lack of infrastructure.

The world has long depended on Africa for its coffee, chocolate and other simple pleasures. Now Verghese is ready to invest big to tap the continent as a potential consumer market. Africa's middle classes are surging. Aligned with annual growth of around 8%, consumer demand is likely to add around $1.1 trillion to African gross domestic product by 2019. Ethiopia, Uganda and Nigeria are among the fastest growing markets, according to Deloitte, the big consultancy.

Verghese considers his company to be one step ahead of other global food giants eyeing the African market. "When we started, they were not very interested in Africa," he said. "Now, they are very keen."

Olam's African joint venture with Japan's Sanyo Foods is one of Nigeria's leading producers of tomato paste, candies, yogurt drinks and juices, to name only several of the company's products.

While analysts think Mitsubishi Corp.'s investment will help Olam to strengthen its balance sheet and go ahead with its long-term expansion plan, there are some short-term headwinds. OCBC Investment Research analyst Carey Wong said Olam's recent quarterly results fell "below expectations," with the company's dairy farming business underperforming and the packaged food business in Africa suffering from Nigeria's currency devaluation.

"But there is definitely a shift in consumer behavior for packaged food" in Africa, Wong added. He continued that Olam's challenge is to differentiate its product lines from other brands as competition increases on the continent, then quickly react to changes in consumer behavior.

"Olam's main wholesale business will benefit as global food companies produce more products in Africa, so it works both ways," Wong said, adding that Olam's diversified portfolio will help it weather downturns in the commodities market.