SINGAPORE -- Never before have Southeast Asia's cities been so well connected. Credit the expanding aviation industry, which seems to keep giving the region one new budget airline after another.

But the skies have grown crowded and profits pinched thin. On Monday, executives, all wearing casual polo shirts, stood side by side behind their uniformed flight attendants and smiled big for the cameras at an event hall in central Singapore.

The eight honchos said they share common objectives: to increase their customer bases and better take on the sprawling bigger rivals such as AirAsia Group. The alliance has pledged to make it easy on passengers booking trips across member airlines. It also promises to let these passengers make all the arrangements at any one of  the members' site, using a novel internet technology.

Perhaps a family in Busan, on the southeasternmost tip of South Korea, wants to take a trip to Krabi, on the west coast of southern Thailand. Dad needs only to visit Jeju Air's website, where he will be able to buy tickets for a Busan-Bangkok flight with Jeju Air and for a Bangkok-Krabi flight with Nok Air, plus return tickets. The trip can be paid for with a single transaction.

Nok Air, NokScoot and Scoot already cross-sell for each other; their five new partners will join the party in the next six to nine months.

The alliance will offer "more destinations than any other LCC group," said Scoot CEO Campbell Wilson, using industry jargon for low-cost carrier. The eight airlines boast 176 planes and connect a third of the world with 160 existing routes. In 2015, they carried a combined 47 million passengers. Until recently, airline alliances -- whether Star Alliance, oneworld or SkyTeam -- were the thing of legacy carriers. Value Alliance is the second major budget carrier grouping. In January, the U-Fly Alliance brought together airlines owned by Chinese logistics giant HNA Group, including HK Express, based in Hong Kong, and Lucky Air, based in Kunming, in the Chinese province of Yunnan.

The Value Alliance is much more comprehensive, covering a larger swath of Asia.

"We think it is still too early to assess the potential impact," said Ahmad Maghfur Usman, a transport analyst for Nomura, in a research note on Tuesday. "AirAsia remains our top pick [among LCCs]."

If the Value carriers succeed in bringing about their alliance, it could help each member hold up its yield, which is the revenue by flying a passenger 1km, the indication of airline's pricing power, and eliminate the need for price wars.

"In reality," the Nomura analyst said, "this could be hard to achieve." The idea of forming an Asia-spanning alliance came out of the work Nok Air and Scoot did to set up NokScoot two years ago. NokScoot came about because Nok Air wanted to fly some longer flights to Japan and China. It decided to hook up with Scoot, which specializes in long-haul routes.

"We discussed what we could do together," Wilson recounted, "and agreed on cross-selling."

Nok and Scoot's move came when existing budget carriers in Asia began to see the looming threats of over-capacity and price wars.

The tipping point came in 2015. Budget airlines' share of total passenger capacity in Southeast Asia fell 0.6 points in 2015 to 56.4% from 57% in 2014. It was the first decline since 2003 when the Sydney-based CAPA-Centre for Aviation began compiling data. 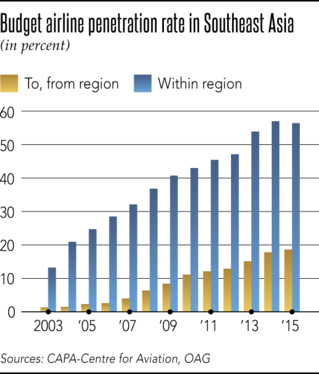 Even AirAsia in late 2015 decided to slow its expansion. Instead of adding capacity, it would focus on under-served or new destinations.

Two days after the Value Alliance was announced, Thai AirAsia X, the AirAsia Group's Bangkok-based long-haul operator, announced new direct routes to Tehran, Iran, and Muscat, Oman. The hope is to tap demand from wealthy Middle Easterners who travel to Bangkok to receive medical treatment in the Thai capital.

As China's economic slowdown became clear in the second half of 2015, Scoot and Nok Air quickly moved to further their joint venture, calling on other budget carriers to come aboard. They wanted to go beyond the traditional budget airline model and give their customers more destination options.

In other words, they wanted to better compete against AirAsia and Jetstar, an Australia-based low-cost airline and a subsidiary of Qantas. These carriers have expanded the number of their overseas hubs to numerous countries under the so-called franchise model.

In this model, a holding company sits above numerous affiliated airlines in numerous countries. This allows AirAsia and Jetstar to adhere to local ownership laws. In the case of AirAsia, it has affiliates in Thailand, Indonesia, the Philippines and India.

Other budget carriers have tried to replicate what AirAsia has done only to end up in misery. Tigerair set up joint ventures in Australia, the Philippines and Indonesia. By mid-2014, many had to be sold off or folded.

Tigerair recorded net losses for four years in a row, prompting a buyout by Singapore Airlines and drastic restructuring.

In 2015, average EBIT (earnings before interest and taxes) margins for Southeast Asian carriers were mere 0.3%, the lowest among all regions except loss-making Africa, Tony Tyler, CEO of The International Air Transport Association (IATA) revealed in his February speech."By comparison, we see the Middle East average at 10.8%, Europe at 5.9% and North America at 13.8%.", he said, and attributed it partly due to competition by LCCs. Although Asian LCC industry is currently in a better shape financially, thanks to low fuel cost, tight operating environment is expected to keep weighing on carriers.

It is in this environment that Scoot and Nok Air began calling for a league of existing budget airlines with complementary routes.

One ace up their shared sleeve is an affordable technology that the two partners already use. It facilitates booking across the alliance without hindering efficiency -- a core value for low-cost airlines. The technology comes from Air Black Box. In 2015, the U.K.-based software startup developed an internet-based reservation system that allows airlines to offer seats on flights from other carriers without losing their brand integrity or having to discard their existing reservations systems, the function which could not be added in traditional systems.

But it wasn't software that brought the eight airlines together. Competition did. The crowded skies and price wars are compressing margins.

The Value Alliance is mostly made up of small players, except for Cebu, which operates 57 aircraft. The other seven have fleets ranging from three planes to 23. Meanwhile, the AirAsia group, founded in its current form in 2001, had 171 aircraft as of the end of 2015.

"We have the network in place within our system," Thai AirAsia X CEO Nadda Buranasiri said on May 18, when asked how the Value Alliance might impact the AirAsia group. The chief of the Bangkok-based long-haul carrier emphasized that AirAsia already has "the largest network of low-cost airlines."

For now, the Value Alliance is focused on cross-selling, and members may bump up against one another on overlapping routes. Unlike legacy alliances, it is not a code-sharing partnership, and code-sharing is believed to be a more effective -- albeit more complicated -- way to optimize airlines' assets.

The Value Alliance carriers will also have to attract passengers to an alliance that offers no groupwide frequent flyer program nor through baggage check-in -- unless some of the airlines make their own arrangements. Some skeptics question whether there is even demand for this kind of partnership.

"While we can understand the rationale behind such a move, the LCC model remains largely a point-to-point business," said Michael Beer, regional transportation analyst at Citibank. Star Alliance, oneworld and SkyTeam bring together legacy carriers that mostly operate on a hub-and-spokes model.

The new partnership, for now, does not include co-development of routes. "Potentially they will expand their cooperation further," said Mohshin Aziz, an analyst at Maybank Investment Bank who specializes in regional airlines. "But it will take a year or two" before the alliance effect becomes significant enough to impact share prices.

Still, Vanilla Air President Katsuya Goto stressed that the alliance members mean business. "Ultimately, this is to strengthen ourselves against the franchise model LCCs."