Quanta said it would recruit up to 1,000 more staff this year to cope with the boom in artificial intelligence and data centers next year (Photo by Cheng Ting-fang)
CHENG TING-FANG, Nikkei staff writerAugust 10, 2017 22:48 JST
CopyCopied

TAOYUAN, Taiwan -- Taiwan's Quanta Computer on Thursday said it expects double digit growth in its data center business this year and next, thanks to emerging applications in artificial intelligence.

The tech company based in the northern Taiwanese city of Taoyuan supplies data center servers to global internet companies such as Amazon, Google, Facebook and Microsoft. It also makes Apple Watch and Macbooks. 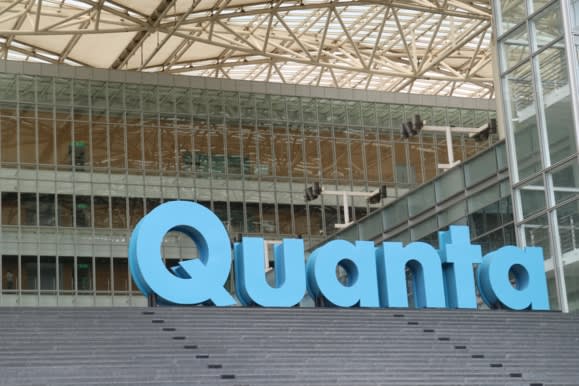 "We are seeing orders from our clients for data center servers growing by double digits this year, and the trend will continue to go up in upcoming years," said Chairman Barry Lam at a press conference on Thursday.

Vice Chairman C.C. Leung said his company is now adding up to 1,000 staff to meet this demand next year in cloud computing and data center-related segments. Data center suppliers including Quanta, Wistron, Inventec and others that sell directly to major internet companies, have together seen 44% growth year-on-year in shipments for the three months ended March, while the world's server market increased only 1.4% in the same period, according to research company IDC's latest data.

Although Quanta's peer Hon Hai Precision Industry, a key iPhone assembler, announced on July 26 that it will build a $10 billion liquid crystal display facility in Wisconsin, Lam said it was not possible for companies to move labor-intensive consumer electronics assembly lines to the U.S.

"It is more likely to invest in some highly-automated projects in the U.S. and it would be very difficult to build a consumer electronic assembly plant with 100,000 workers in America," said Lam.

Quanta's Leung also said since the U.S. does not have a complete electronics component supply chain, to operate a consumer electronics assembly factory there could cost "whole a lot more" even if the business was subsidized or if it received tax reduction incentives.

For the April-June period, Quanta generated 13% more revenue at 235.36 billion New Taiwan dollars ($7.8 billion) than a year ago. Its net profit increased 13.6% year-over-year to NT$3.97 billion, thanks to healthy demand in its data center business, and strong Apple Watch and Macbook sales.

"From the orders data we learned from the supply chain, although the whole note book market looks flat this year, Apple is the only company that could see some 5-6% growth this year and outperform the competitors," said Annabelle Hsu, an analyst at IDC. She said even though Macbooks are more expensive than other laptops, consumers are willing to buy products that can be differentiated from other brands.

Quanta said the second half of the year looks optimistic and the company could definitely generate more sales compared with first six months of 2017.

Shares of Quanta closed 0.39% lower at NT$75.7 ahead of the earnings report. They have expanded more than 25% so far this year.