Samsung in talks with LG over LCD TV panels

South Korean rivals set to cooperate for the first time

SEOUL -- Samsung Electronics said Thursday it was in talks with LG Display to procure liquid crystal display panels for its TVs, the first time that the two South Korean rivals have shown any interest in working with each other.

Samsung said that it was considering a deal with the subsidiary of LG Electronics, but nothing had been decided yet. LG Display declined to comment.

Sources familiar with the situation said that the two companies are negotiating over the supply of 1 million LCD panels. Japan's Sharp had announced in December 2016 that it would stop supplying large LCD TV panels to Samsung Electronics from 2017. Sharp was acquired by Taiwan's Hon Hai Precision Industry in August 2016.

"LG Display was approached by Samsung Electronics over LCD supply. The order is just 1 million panels, but LG thinks it is important to start a business deal with the longtime 'enemy,'" said an industry source. "LG believes that it can expand orders step by step."

Samsung received an estimated 2 million to 3 million of the 40- and 60-inch LCD panels in 2016 from Sakai Display, an Osaka-based production joint venture between Sharp and Hon Hai. 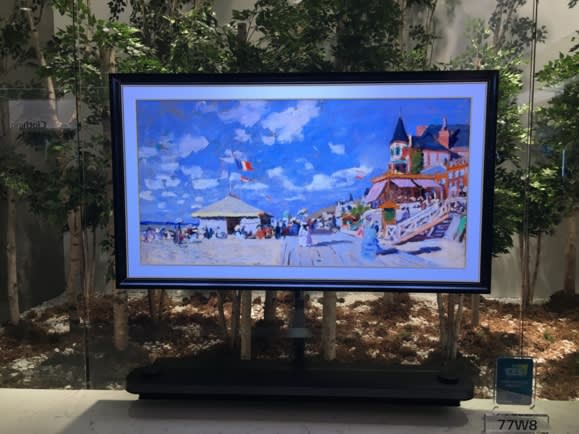 LG Electronics' AI OLED TV is displayed at the CES in Las Vegas on Jan. 9. (Photo by Kim Jaewon)

Samsung Electronics also featured the world's first QLED TV featuring 8K artificial intelligence technology in the show, which will be launched internationally, starting with South Korea and the U.S. during the second half of 2018. The company said that the 8K resolution maximizes the viewing experience through upgraded standard definition and noise reduction.