SEOUL -- Samsung Electronics's dominance in both leading types of memory chips gives it flexibility to focus its production resources where prices are higher, as its strong first-quarter showing demonstrates.

Earnings guidance from the South Korean company for the January-March quarter released Friday shows operating profit jumping 58% on the year to 15.6 trillion won ($14.5 billion) on sales of 60 trillion won, up 19% from a year earlier.

Memory chips can be broadly divided into two main types: NAND, or "non-volatile," flash memory, used to store files in devices such as smartphones, and DRAM, a "volatile" type of memory, requiring power and typically used for temporary storage when processing data.

Though NAND prices had been climbing steadily, they have slipped in decline this year, with the benchmark price for large orders sinking 3% to 4% in February compared with the preceding month.

Some had expected the downturn to hurt Samsung, the world's biggest chipmaker by revenue, given that semiconductors generate about 70% of its profits. Yet an insider at the South Korean company said that the memory business as a whole remains strong.

Samsung's upbeat quarterly performance owes mainly to its strong position in DRAM, for which it controls about half the global market. Samsung, fellow South Korean chipmaker SK Hynix and U.S. rival Micron Technology have a combined market share of over 90% in DRAM. A lack of participants limits price competition in this segment of semiconductors.

Samsung plans to reallocate a portion of the capital spending earmarked for NAND this year to DRAM -- a strategy made possible by the company's twin focus. This could widen its lead over its closest competitor in NAND memory, Japan's Toshiba, which left the DRAM market in the early 2000s.

A few risks still remain. One analyst noted U.S. President Donald Trump's tendency to pick fights with big technology companies as a potential pitfall. The Trump administration is weighing tighter regulations on platform providers such as Facebook and Amazon.com. If this uncertainty spurs tech businesses to put off capital spending, Samsung could suffer.

The company will release final first-quarter results with further details, such as net profit and segment results, later this month. Operating profit in the information technology and mobile business, which includes smartphones, is widely expected to top 3 trillion won, up from a year earlier.

Earnings in Samsung's display segment, which focuses on organic light-emitting-diode panels for smartphones, may have tumbled amid disappointing sales of Apple's top-of-the-line iPhone X. Some analysts estimate that the segment's operating profit feel to about 400 billion won, less than a third of the year-earlier result, owing partly to depreciation on equipment purchased on expectations of higher demand.

And much regarding Samsung's future strategy remains up in the air for now, especially amid speculation that Vice Chairman Lee Jae-yong appears to be testing sentiment about a return to the helm after about a year behind bars. 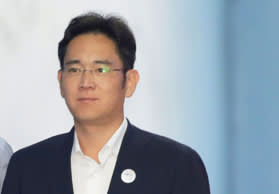 Samsung Electronics Vice Chairman Lee Jae-yong was freed in February after his bribery sentence was suspended on appeal.   © Reuters

The heir and de facto head of the Samsung conglomerate was arrested in February 2017 in connection with the corruption scandal that brought down impeached President Park Geun-hye, who was sentenced Friday to 24 years in prison. Lee was released in February on appeal, letting him return to management. Shareholders at last month's general meeting showed little inclination to hold him accountable.

Lee took off for Europe on March 22 -- Samsung's 80th anniversary -- for what local media said was his first trip abroad in a year and a half. He visited France and Switzerland before traveling to Japan via Canada, and is expected to return to South Korea soon. The Samsung chief met with executives in such fields as artificial intelligence and biotechnology, according to the Maeil Business Newspaper.

Multiple media outlets reported on Lee's activities during the excursion. Market watchers speculate that the company looks to give the vice chairman more exposure to test the waters of public opinion and see when is right to bring him back into full-time leadership.

But doing so may anger a South Korean public that views Samsung as a symbol of the country's economic inequality. Some legal experts argue that Lee will need to keep his head down until the Supreme Court rules on his appeal.

Lee's legal trouble held up plans for acquisitions in the autoparts and biopharmaceutical industries aimed at growing profit drivers beyond the memory business. A Samsung executive said at the time of Lee's arrest that the company had about two years of planning it could work with before it needed to worry. If so, then Samsung will need to figure out a strategy for 2019 onward.