HONG KONG -- Thai industrial conglomerate Siam Cement Group will look for investment possibilities in South China and India in the years ahead, as China shapes its vision of the Belt and Road Initiative, President and CEO Roongrote Rangsiyopash said Monday. The plan, if realized, will mark a departure from its strategy of focusing on the Association of Southeast Asian Nations.

The conglomerate generates almost all of its revenue in the ASEAN region and its production assets are scattered among the 10 member-states, as it had sought to diversify from its home market of Thailand.

With a foothold already in construction materials in the so-called CLMV (Cambodia, Laos, Myanmar and Vietnam) region, Roongrote cited the two neighbors, South China and India, as natural choices for expansion. "We already have operations in South China. I would like to visit India more frequently going forward," he said in an interview with the Nikkei Asian Review at a conference hosted here by Credit Suisse. Over the past few years, Roongrote visited India once or twice annually.

He added that such expansion would fit with the BRI. China's ambitious initiative to build infrastructure along the ancient Silk Roads connecting East Asia and Europe will stimulate spending on construction and spur an increase in private-sector investments, which "will give us opportunity to sell our products," Roongrote said. Routes connecting southern China via Myanmar to western India and those connecting southern China via Vietnam, Laos, Thailand to western India are among the routes Beijing wants to develop under the initiative. 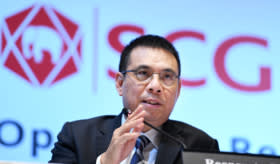 Siam Cement Group President and CEO Roongrote Rangsiyopash speaking to the press in Bangkok on Jan. 24. (Photo by Takaki Kashiwabara)

However, the conglomerate's investments beyond ASEAN will "have to be" after five years or so from now, Roongrote said. With its major new petrochemical complex construction in southern Vietnam and its plan for a second key petrochemical complex in Indonesia, the group's capital will be deployed for the coming five years, he explained.

In Vietnam, Siam Cement Group has reportedly proposed to take over entirely Long Son Petrochemicals, an entity partly owned by Vietnamese state-owned companies that will run a sizable $5.4 billion petrochemical complex, from the current 71% stake it holds. That complex will start operation around 2023.

Although Siam Cement Group and the Vietnamese government held a ground-breaking ceremony for the plant in February, that did not signal the start of construction but "was a symbol to affirm commitments by the Vietnamese government, the local government and by ourselves," Roongrote said. "Regarding the share-holding structure of Long Son, it is still under discussion, and we expect the construction to start in the second half of this year," Roongrote said.

The proposal to make Long Son a wholly owned subsidiary was apparently meant to speed up decision-making and execution. However, Roongrote said the company was "still open [to various options of shareholding structure] as, long as we have the majority." He predicted the two parties will reach a conclusion within "a few months."

Although Roongrote is interested in expanding beyond ASEAN, he also emphasized that there remain huge growth opportunities in Indonesia and Vietnam in the petrochemical businesses. The Long Son project to build the first integrated petrochemical complex in Vietnam is planned to eventually provide a capacity of 1.5 million tons of ethylene, propylene and other olefins annually. Total demand in Vietnam will grow to 3.5 million tons from the current 2.5 million tons in several years, he said. In Indonesia, even if Siam Cement Group decides to build its second integrated petrochemical complex, its capacity will still fall short of 70% of total demand.

"There is a lot of room [for additional investments] in those two countries alone within ASEAN," Roongrote said.

In addition to those opportunities, the Thai government is passionately promoting the construction of the so-called Eastern Economic Corridor, for which the junta passed a set of laws including tax breaks and other investment incentives earlier this year. In response to the government initiative, PTT, the country's largest energy conglomerate, announced a $985 million integrated petrochemical complex construction plan inside the EEC area, an industrial zone stretching eastward from Bangkok toward the border with Cambodia.

In contrast, Siam Cement Group "will focus on light industry rather than a capital-intensive industry like petrochemicals," Roongrote said. "We are already in oversupply in the Thai petrochemicals market," he pointed out.

No matter which businesses and geographic areas Siam Cement Group chooses to invest in, one thing is certain: It will face endless international competition. The key to outperform peers, Roongrote said, is technology rather than sheer scale of production capacity. He said "I want to make the level of our research and development spending at around 2% of our total revenue." For 2017, the company spent about 0.9% of group revenue in R&D.

To afford that level of R&D requires sufficient profit and cash flow. Asked about medium-term managerial benchmarks, Roongrote cited a cash return-on-asset of above 15%. He predicted the massive spending on the Vietnamese chemical complex, without incoming revenue during construction, would dent the rate over the coming few years but said it would recover to over the 15% level after the plant starts operations.

"Not only in the petrochemical field but we need R&D investment in information technology and data science to stay relevant," Roongrote said. "We should keep up with innovation in those fields as they might cause disruption in the way we do our business."