SINGAPORE -- Singaporean banks remain concerned over the oil and gas sector, the city-state's key industry and their major borrowers, despite an earnings turnaround last year and optimistic economic outlook for 2018.

Net profits at DBS Group Holdings, Oversea-Chinese Banking Corp. and United Overseas Bank for the 2017 full-year increased by 3%, 19% and 9% respectively from a year ago. This was backed by a steady economy in Southeast Asia, leading to a higher interest income and wealth management fees. OCBC and UOB both logged a record net profit, while DBS also hit a record, excluding one-off items.

The 2017 results show a turnaround in the banks' performance from the previous year. In 2016, the three banks logged a net profit decline due to higher provisions for borrowers in the oil and gas industry and related businesses that had suffered from the lower oil price.

Since the oil and gas sector, including the related shipping business, is one of Singapore's core industries, the banks' results largely depend on the industry's performance.

Nevertheless, the banks are still concerned over the industry's outlook, the companies' executives told earnings briefings.

"We saw the oil price rise to $60 per barrel level in the fourth quarter. However, what we have not seen is charter rates [for ships showing] noticeable improvement," said Samuel Tsien, chief executive of OCBC at Wednesday's press briefing.

As a result, the bank added provisions of S$1.11 billion ($840 million) for new and existing loans in the fourth quarter, nearly four times larger than in the same quarter a year ago. "Additional provision is necessary for future uncertainty" so that the bank can continue to work with the borrowers, Tsien said.

UOB also added S$744 million of loan provisions during the October-December quarter. As a result the total provision for 2017 was S$1.4 billion, up from 2016's S$969 million.

As a result of accelerated provision allocation, the asset quality of the banks has become healthier, according to Eugene Tarzimanov, senior credit analyst at Moody's Investors Service.

"We expect that most problem assets in the oil and gas services are now adequately provisioned and collateralized at the three banks, and expect that 2018 will bring stability to the banks' asset quality," he told the Nikkei Asian Review. 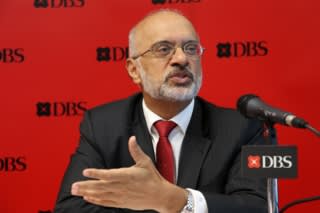 Overall, the banks' managements shared an optimistic view for the current year. Speaking at a news conference on Feb. 8, DBS chief executive Piyush Gupta said: "The fundamentals of the global macro economy are very, very robust ... I'm quite optimistic about the global macroeconomic environment [for 2018]."

OCBC's Tsien said on Wednesday: "Business confidence has increased, and the momentum that we saw increasing during 2017 quarter by quarter seems to be sustainable." On the other hand, Tsien said interest rate rises in major markets globally may be a threat to the industry as they could affect borrowers' debt obligations.

Moody's Tarzimanov said that "interest rates increases will be very gradual in Singapore and in the U.S., and the impact on the debt repayment capacity of corporate and household borrowers will be manageable."