SEOUL/BEIJING/PALO ALTO, U.S. -- Feel like a bit of meditation? With one click of the smartphone, the television shuts off, the lights are dimmed and healing music starts playing through the speakers.

Samsung Electronics' latest model, the Galaxy S9, is the first smartphone from the South Korean company to "manage every facet of the connected lifestyle," the company said at its launch on Feb.25.

Through an app called SmartThings, users can also check who is at the front door, what is in the fridge, when their laundry is finished and when the floors need to be vacuumed.

But the clever tasks that the smartphone can do refelct an emphasis on improving software amid a lack of breakthrough in the hardware. As smartphone sales slow globally, Samsung and other major smartphone makers are looking to reinvigorate the market by enhancing connectivity.

"The time has come for a new kind of smartphone," Samsung's chief of mobile operations Koh Dong-jin remarked at the launch ceremony in Barcelona.

Cellphones have been used to control home electronics in a limited capacity for several years. Samsung phones have had this ability, but required a different app for each device. The S9, however, will introduce a single app to control televisions, refrigerators and other compatible appliances.

Apps that integrate control of several appliances are rare, since permission is needed from each maker. But Samsung leveraged its advantage as being one of the worlds' top manufacturers of both smartphones and home electronics.

Samsung's artificial intelligence assistant Bixby offers more added features. One lets users scan text with their camera and have it automatically translated into their native language. The function will be available in 33 languages and useful for travelers that need to read signs or menus. 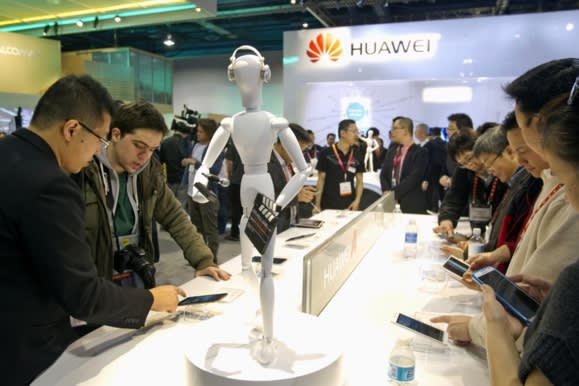 Apple, the world's second-largest smartphone maker after Samsung, is also looking to link its iPhones with appliances and other electronics. CEO Tim Cook calls this strategy an "ecosystem," in which products are designed around the phone and integrated into daily life. The Apple Watch, for example, improves usability across devices by allowing users to take calls and view messages from their wrist.

There are currently about 1.3 billion Apple devices in use. Given such strong brand power, the company added a feature to the iPhone that lets consumers operate appliances made by other companies, such as lighting. Smartphone memory chips are on a healthy price drop

Third-ranked Huawei Technologies, meanwhile, has said it plans to surpass Samsung as the world's top maker within four-to-five years. The Chinese company's next move will be to provide smart speakers that can assist with various daily tasks.

Key to that goal will be its 5G-capable consumer smart speakers that are set to ship by the end of 2018, a Huawei executive told Nikkei at the Mobile World Congress in Spain. The company is exploring services that connect smartphones and appliances to the smart speaker, which will serve as the main device, using the next-generation network's high speeds.

The smartphone market is experiencing a notable slowdown in growth. Figures from U.S. research firm International Data Corp. showed that shipments declined slightly in 2017 to 1.47 billion units. Data from U.S. consultancy Gartner also showed sales falling 5.6% on the year in the October-December quarter, the first drop since the survey began.

Samsung and Apple have tried to respond to market changes with higher-priced offerings, but consumers have not been supportive. To prevent profitability from deteriorating, both makers are widening their ecosystems beyond smartphones to improve convenience.