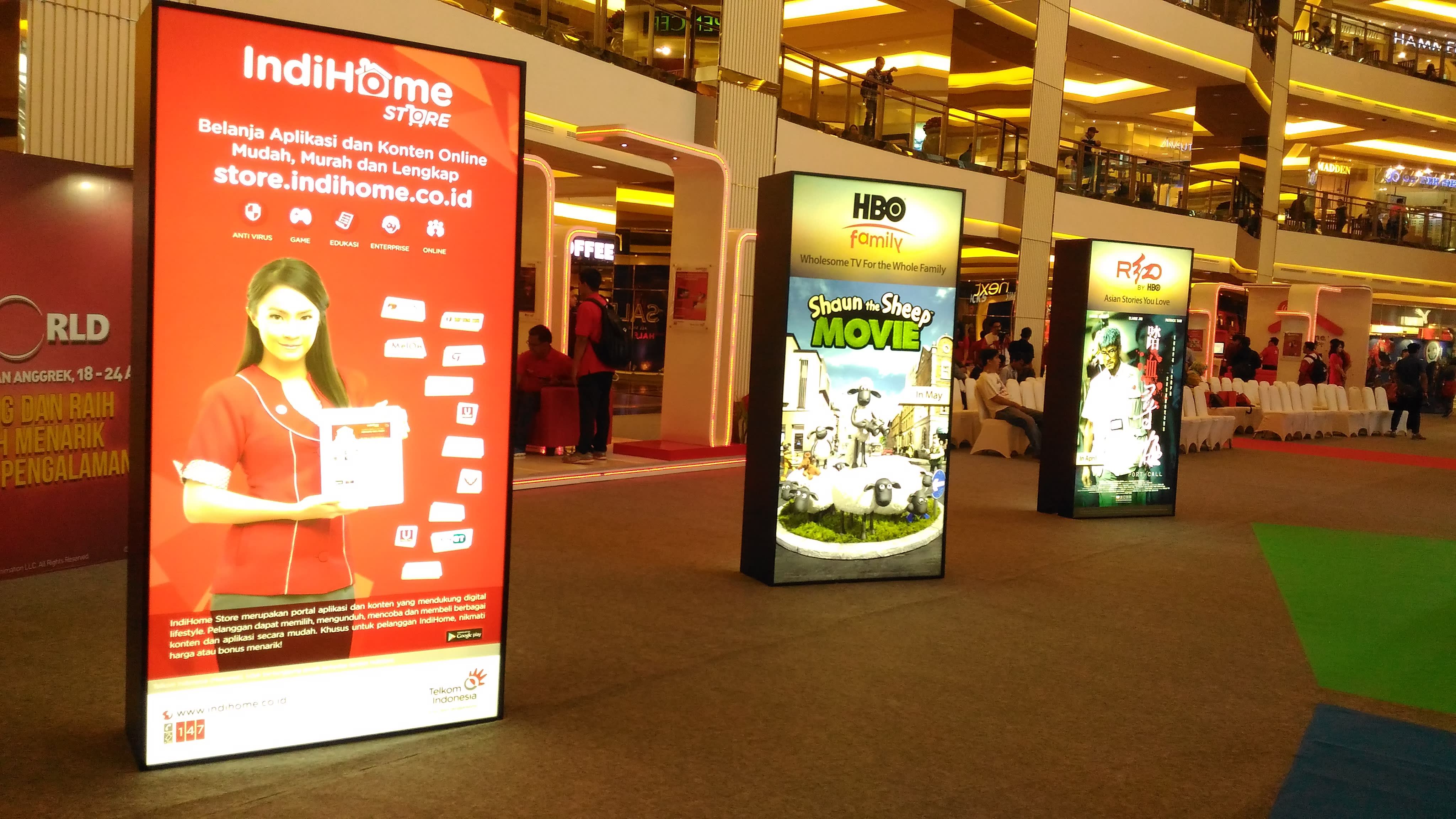 JAKARTA -- For a state-owned company that for decades has gotten fat off its home market monopoly, Telekomunikasi Indonesia is looking like a spry competitor in the digital age.

Last month, Telkom, as it is known, announced a slew of partnerships with foreign companies and a commitment to investing in startups.

"So this is a new kid on the block," Dian Rachmawan, director of consumer services, said on April 19 in announcing Telkom's partnership with iFlix, a Malaysia-based video streaming service. "This collaboration is very promising. We will strengthen our position as the leader in this market."

"A kid," not "the kid." Earlier in the month, Telkom, through its mobile subsidiary, Telkomsel, joined other carriers in bringing Hooq, a Singapore-based video streaming service, to Indonesian smartphone users. Hooq says it has Asia's "largest library of multilanguage content."

A day before the iFlix announcement, Telkom announced a partnership with U.S. studio Dreamworks Animation. It also upgraded an existing deal with HBO, a U.S.-based premium cable channel.

Telkom also kicked off a partnership with China's Future TV. In addition, it will soon start offering CatchPlay, a Taiwan-based streaming service that boasts access to new Hollywood blockbusters, as well as Hong Kong-based Viu, which focuses on Asian dramas.

Most of the new partnerships are intended to make consumers crave IndiHome, Telkom's new flagship service that combines a landline, high-speed internet service and pay TV channels in one package. Investors have reacted positively. Telkom's share price rose 7.5% in the three weeks of the announcements, outperforming the benchmark Jakarta Composite Index, which gained 1% during the same period.

The gain was before Telkom announced its first quarter results: Revenue grew by 17% to 27.5 trillion rupiah ($2.07 billion), and net profit rose 20% to 4.6 trillion rupiah.

The quarter marked the first time that data, internet and information technology services made up the lion's share of Telkom's revenue; these services accounted for 37% of the company's overall revenue. Data service revenue grew by 45% from a year earlier, while revenue from cellular voice calls, the previous revenue king, grew by 5%.

Telkom is one of Indonesia's largest state-owned companies and is easily the country's largest telco. It has long held a monopoly in landlines, and subsidiary Telkomsel has led the mobile market. At the end of March, Telkomsel reported having 153.6 million subscribers, more than double the number at main rivals Indosat Ooredoo and XL Axiata. Consider that Indonesia is Southeast Asia's most populous country, and it is no wonder that foreign companies are lining up to partner with the country's dominant telecommunications provider.

"They come to us to talk, and we've been reviewing their proposals, in terms of quality, pricing, etc.," said Jemy Confido, vice president for consumer marketing and sales. "We've selected those that are in line with our business."

"Those" would be video streaming and other content providers, considering Telkom is trying to further grow its data and internet service businesses.

"It is difficult to sell broadband only," a Telkom executive in charge of IndiHome said. "People would ask, 'Why do we need high-speed internet?' Watching stuff is one of the answers."

The number of IndiHome subscribers increased by 250,000 in the first quarter, bringing the total to 1.35 million -- enough to make Indihome No. 1 in the home broadband market, analysts say.

"Bear in mind that Link only booked [first quarter] subscriber growth of 4% year on year," said Leonardo Henry Gavaza of Bahana Securities. Gavaza was referring to Indonesia's No. 2 player in home broadband, Link Net, a subsidiary of the Lippo Group, the Chinese-Indonesian conglomerate.

In pay TV, Telkom is No. 2 in Indonesia. Indovision, part of Global Mediacom, with its 2.4 million subscribers, controls more than 70% of the market. Indovision recently inked a partnership with XL Axiata on high-speed internet services for households. 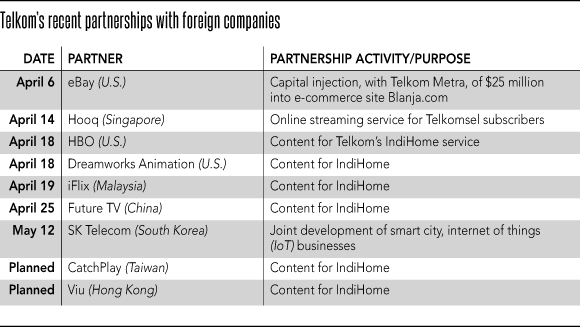 Telkom expects to increase the number of IndiHome subscribers to 3 million by the end of 2016 and grab a 50% share of the country's pay TV market.

The most basic IndiHome package costs 405,000 rupiah ($30.3) per month - covering internet speed of up to 10 megabyte per second, free 1,000 minutes of phone calls to domestic numbers, pay TV subscription and free access to Telkom's wifi network across the country. As comparison, Indovision-XL Axiata is currently offering a promo tariff of 290,000 rupiah per month for pay TV subscription and 20 gigabyte of internet data access, with speed up to 150 Mbps.

Amid the open competition triggered by digitization, Telkom's strength is being challenged. Gulliver of the Indonesian market is feeling the heat.

Meanwhile, Indosat and XL, the second and third largest mobile phone operator by subscribers have joined hands. Two companies have recently announced plans to jointly develop high-speed internet connections across the archipelago, undoubtedly to catch up with Telkom, which has stronger "cash generation capacity", an analyst has said.

Singapore Telecommunications owns a 35% stake in Telkomsel and would feel the blow if the Indonesian unit loses potential foreign partners to rivals.

"In Indonesia, Telkomsel delivered impressive performance," SingTel CEO Chua Sock Koong said regarding the first quarter. "If you look at the earnings contribution from the regional associates, it's been a great quarter."

Many of those subscribers found their way to Globe Telecom, a venture between the Philippines' Ayala Corp. and SingTel, which has been aggressively partnering with foreign carriers to strengthen its mobile business.

Telkom knows other companies are gunning for it. To ward them off, Telkom is increasingly investing in startups and trying to come up with its own innovations to boost data usage.

In the second week of April, Telkom sent teams from three Indonesian startups to Silicon Valley, part of a startup incubation and acceleration program being managed by a new unit, MDI Venture, which has set up an office in the U. S. city.

According to an MDI executive, Telkom's investing period will run for five years, with the "harvesting period" following that.

Indra Utoyo, Telkom's chief innovation and strategy officer, noted that investing in startups is a "high risk" business, but for Telkom, "it is either innovate or die."

Gavaza, the equity analyst at Bahana Securities, said he expects Telkom to continue to outperform the market.

But the company which is obliged to protect interests of the Indonesian government has also attracted controversy.

In January, it decided to block popular U.S. video streaming service Netflix, although it could have helped Telkom increase its data traffic. Indosat and XL let their subscribers access the service.

Confido said Netflix failed to comply with a government order to establish a presence in the country. Indonesia's government, Telkom's largest shareholder, has openly said it wants to boost tax revenue from foreign companies operating in Indonesia.

Meanwhile, Telkom is at the forefront of President Joko Widodo's vision of Indonesia growing up to be Southeast Asia's largest digital economy by 2020. Part of this vision is the creation of 1,000 "technopreneurs" within the next five years. Telkom says it aims to contribute 40 startups ready to begin offering their products or services every year.

Although Telkom is already eager to innovate, trying to match Widodo's ambition could lead to poor investments.

In the digital era, with fast and furious innovations disrupting entire industries, the ability of Telkom to break away from its monopoly mindset and corporate culture is being tested.

Nikkei staff writers Cliff Venzon in Manila and Tomomi Kikuchi in Singapore contributed to the story.