Merlin Swire, the oldest son of Swire family patriarch Adrian Swire, will relocate to Hong Kong from the U.K. to take up his new role, effective July 1, while relinquishing his current position as chief executive officer at John Swire & Sons, the holding company of Swire Pacific.

At the same time, the 45-year-old Oxford graduate will also become chairman of two other Hong Kong-listed units under the group -- Swire Properties Ltd. and Hong Kong Aircraft Engineering Company Ltd. -- as well as chairman of the unlisted John Swire & Sons (H.K.).

John Slosar, the current chairman of the four companies, will retire from the group after 38 years, but he will remain chairman at Cathay Pacific Airways, controlled by Swire Group. Slosar, a U.S. native with a graduate degree from Cambridge University, was appointed in 2014 as the first non-British chairman of Swire Pacific and John Swire & Sons (H.K.).

"After 20 years in the business, I am delighted to be returning to Asia as chairman of Swire Pacific during such a dynamic time in the development of China and the region," Merlin Swire said in a statement. He joined the Swire Group in Hong Kong in 1997. 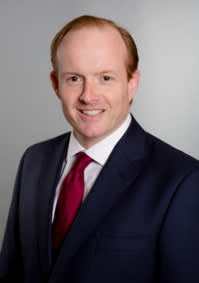 Merlin Swire was appointed as chairman of Swire Pacific, the very first from the Swire family. (Photo provided by Swire Pacific)

Within Asia, Swire Group's activities come under its Hong Kong-listed arm, Swire Pacific. While elsewhere in the world, many of its businesses are held directly by the parent company, John Swire & Sons.

While the Swire family has been closely involved in the group's business, none of its family members have previously held the position of chairman at the Asia-focused company.

In the statement, Merlin Swire highlighted Hong Kong's importance to the group, saying that his move back to the city "reaffirmed its long-term commitment to Swire Pacific at a time of rapid change."

The 202-year-old business empire has long had its operations centered in Hong Kong and mainland China, with the earliest business ties with China dating back to the Qing dynasty. Currently, most of its key businesses remain located in the Asia-Pacific region. Other than the three listed subsidiaries, Swire Pacific also runs substantial businesses in marine services, the trade and industrial sector, and beverages. Its beverages operation is one of the largest Coca-Cola bottlers in the world.

While group veteran Slosar will soon relinquish most of his responsibilities at the group, the 60-year-old will remain chairman and director of Cathay Pacific to help the airline see through its three-year transformation plan -- which targets to save 4 billion Hong Kong dollars ($511.6 million) -- amid profit losses. 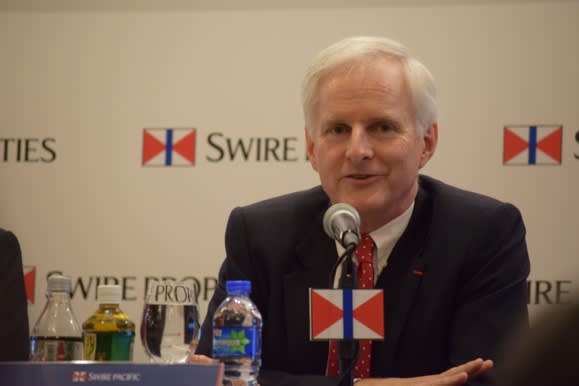 John Slosar will resign from chairman of the four Swire Group companies, while retaining the position at Cathay Pacific Airways. (Photo by Jennifer Lo)

Slosar joined Cathay Pacific in 2007 as chief operating officer from the group's beverage division, and he subsequently was promoted to chief executive officer and chairman. During the early days of his leadership, the Hong Kong flagship carrier had been routinely voted as the world's best airline. Like a number of expatriate Hong Kong businessmen, he has taken Chinese nationality.

In recent years, however, Cathay Pacific has faced increasing competition from low-cost carriers and mainland Chinese airlines. In addition, Cathay Pacific reported a loss of HK$8.46 billion due to a bad bet in its hedging of oil prices.

"Being the chairman of Swire Pacific has been a singular honor for me," Slosar said in the statement. "I look forward to continuing my work with the Cathay Pacific team."