"These emerging Chinese competitors will face stricter reviews on how they obtain memory chip technology and whether they are involved in trade secret theft," said President Lee Pei-Ing of Nanya Tech.

"Not only customers from the West would care about whether the memory chips they purchase have any legal issues, but local Chinese device-makers who want to go global will care a lot about the issue too," Lee said. 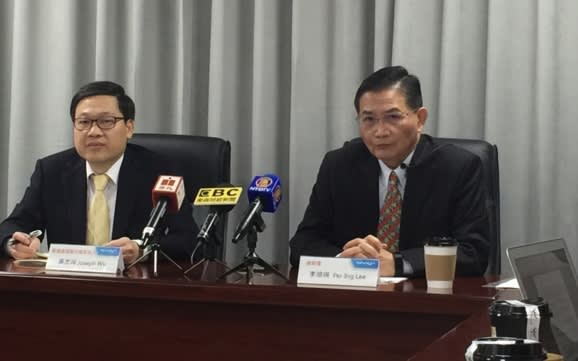 Nanya Technology President Lee Pei-Ing, right, told reporters on Jan. 16 that Chinese chipmakers would face heightened scrutiny on "whether they are involved in trade secret theft." (Photo by Cheng Ting-fang)

DRAM is an essential memory component used in a wide range of electronic devices including PCs, smartphones and data center servers. For now, China does not control any company that can churn out DRAM in large quantities.

Lee said it was unlikely Chinese companies would be able to make memory chips on their own within the next two to three years without licensing technology from existing global players.

Beijing, too, isn't afraid to wade in to protect its nascent industry.

Taiwan conglomerate plans $15bn worth of projects in US

DRAM price to rise until 1Q of next year: Nanya Tech chief

China's National Development and Reform Commission is looking into whether Samsung, the biggest DRAM maker which controls roughly 46% of the global market, has been involved in price manipulation, according to a December report from China's business publication 21st Century Business Herald.

In a sign that things could get bitter, Micron filed a lawsuit last December in the U.S. against its Chinese competitor Fujian Jin Hua Integrated Circuit and Taiwan's United Microelectronics (UMC). Micron alleged that some of its former employees who went to work for UMC stole trade secrets for the Taiwanese company, which were then passed on to Jin Hua.

Before Micron's U.S. lawsuit, UMC and three of the company's employees were indicted by local prosecutors in Taiwan acting on the complaints made by Micron. Earlier in January, as a counter-action, UMC sued Micron for patent infringement in several Chinese cities.

Jin Hua is set to begin production of lower-end specialty DRAM this year.

Another rising DRAM maker in China is Innotron Memory, previously known as Hefei Chang Xin or Hefei Ruili. With support from China's Anhui province, Innotron is planning to begin production in the first half of 2019. Innotron is teaming up with GigaDevice, a Chinese memory chip provider whose second biggest shareholder is Beijing-backed China Integrated Circuit Industry Investment Fund.

State-backed Tsinghua Unigroup has also announced plans to develop DRAM technology in the southern Chinese city of Nanjing without revealing the source of technology.

Nanya Tech's Lee said he saw DRAM prices in the first half of this year hovering around the current level and perhaps rising a bit, after the more than 50% hike from the third quarter of 2016.

"We see a balanced demand and supply for the first half of this year, but there will be some uncertainties in the second half of 2018," said Lee.

The most robust demand driving the DRAM industry is from data center servers this year, Lee said. Nanya, unlike many Taiwanese tech companies, does not supply to Apple. It mainly caters to Chinese mid-range smartphone-makers and networking equipment providers such as Huawei Technologies and ZTE, and to a wide range of PC and consumer electronics companies.

For all of 2017, Nanya Tech generated revenue of 54.93 billion New Taiwan dollars ($1.85 billion), 32% more than the previous year. Thanks to tight supply and rising demand for DRAM chips, operating profit more than doubled to NT$18.8 billion from a year ago. Net income was a record NT$40.28 billion, mainly due to the disposal of all of its 5.26% holding in Micron.

Sean Yang, an analyst at Shanghai-based research firm CINNO, who sees an upside of about 5% for the whole of 2018. "However, it could be the calm before a storm. We are worried that DRAM price will collapse in 2019 when Samsung Electronics and SK Hynix both begin to churn out products in their new facilities in Korea and China, respectively," said Yang.