Advantech will set up a joint venture with the Taipei-backed Institute for Information Industry to offer a cloud platform that companies can use to monitor their equipment. (Photo by Debby Wu)
DEBBY WU and CHENG TING-FANG, Nikkei staff writersJanuary 16, 2018 12:44 JST | Taiwan
CopyCopied

TAIPEI -- Leading Taiwanese industrial computer maker Advantech is setting up a joint venture with a government-backed research agency to offer a cloud platform that can be used for smart manufacturing and equipment monitoring, at a time when the local industry -- including Apple suppliers -- is feeling the heat of competition from Chinese rivals and amid rising costs in China.

Advantech and the Taiwanese government-backed Institute for Information Industry will each put $5 million into the joint venture, which will begin operating at the end of this year.

The platform allows companies to monitor and collect a wide range of information from their equipment through sensors. According to Advantech, this new equipment monitoring technology can be used in factories as well as in retail and bike-sharing industries.

"If you do not begin to make some changes to make the whole production process smarter, you might be out of the game soon," Jack Lin, technical vice president of Chin Poon Industrial, which makes print circuit board for automotive use, told Nikkei Asian Review. 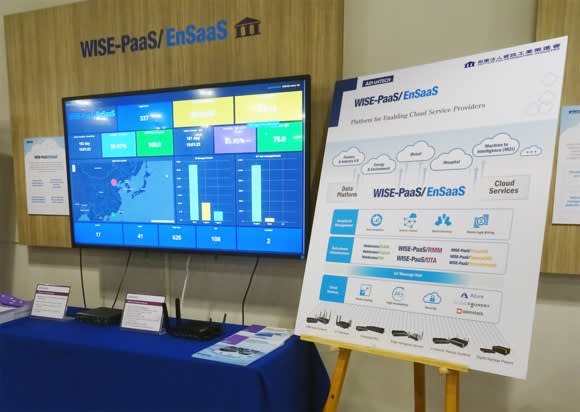 Lin's company is an early adopter of Advantech's platform. Print circuit board is an essential component used in various electronic products including notebooks and smartphones.

"In the PCB segment, at the end of the day, the competition is all about whose production quality is better and who can offer a better price," Lin said. Chin Poon counts almost all major automotive electronic system suppliers such as Bosch of Germany, Magna of the U.S. and Denso of Japan as its customers. It virtually supplies to all the carmakers in the world through its customers.

Taiwan's print circuit board industry is the world's largest by revenue, but it is facing growing challenges from Chinese rivals such as Founder PCB and China Circuit Technology, a subsidiary of Shantou Goworld Electronics, as they are able to offer lower prices, thanks to support from Beijing.

Lin said his company wants to collaborate with Advantech, mainly hoping to overhaul the manufacturing process to reduce production time and to better identify defects at an early stage. "With this, we are targeting to reduce cost of at least double-digit, or more than 10%, in two years," said Lin.

"It will also help us monitor our handling of waste water better," Lee said. Growing labor costs and tighter environmental regulations in China are weighing on Taiwanese manufacturers, as many base most of their factories in the country.

A number of print circuit board makers, including Chin Poon, Unimicron and Apple supplier Unitech, are signing up for the new platform. If advanced makers of print circuit boards get their manufacturing equipment connected and collecting data, they can improve yield rates, ensure quality standards, and reduce production inefficiencies, said Advantech Chief Technology Officer Allan Yang.