TAIPEI -- A senior executive of Formosa Plastics Group said on Friday that the company's $10.6 billion steel plant in Vietnam, one of the biggest foreign investment projects in the country, will not be able to begin full production next week as planned, amid public accusations that the new facility discharged toxic waste and killed fish in Vietnamese waters.

"Vietnamese regulators have not completed environmental and other inspection processes to approve the steel plant's operation," Yu Ching-chang, vice president of Formosa Ha Tinh Steel, told the Nikkei Asian Review on Friday. He added that his company is negotiating with government officials. 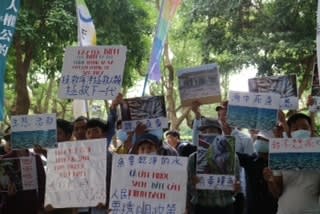 About 20 Vietnamese immigrants protest outside the annual general meeting of Formosa Plastics in downtown Taipei, demanding clarification on the cause of the mass fish deaths in Vietnam.

The Vietnamese media has accused Formosa Ha Tinh Steel of causing the mass deaths of fish across northern and central Vietnam, but the company has denied any wrongdoing. On April 27, Vietnamese officials said they had yet to find any link between the steel plant and the fish kills, and they said on June 2 that they had discovered the cause but they were not ready to release their report.

On Friday, about 20 Vietnamese immigrants protested outside the annual shareholders meeting of Formosa Plastics Corp., the flagship unit of the Taiwanese industrial conglomerate, in downtown Taipei. They urged the Taiwanese group to conduct an investigation to determine the cause of the mass fish deaths.

"We are working with the Vietnamese government and international environmental experts to investigate the cause of the pollution," Jason Lin, chairman of Formosa Plastics, told shareholders on Friday. "We will publicize the report once we learn the outcome" of the investigation. Formosa Plastics Group began construction on the Vietnamese steel project in 2008. The work was first delayed by anti-China protests in the country in 2014.

Shares of Formosa Plastics closed 0.39% lower at 76.7 New Taiwan dollars ahead of its shareholders meeting. The prices have slipped about 1% since the mass fish deaths were first reported in early April.