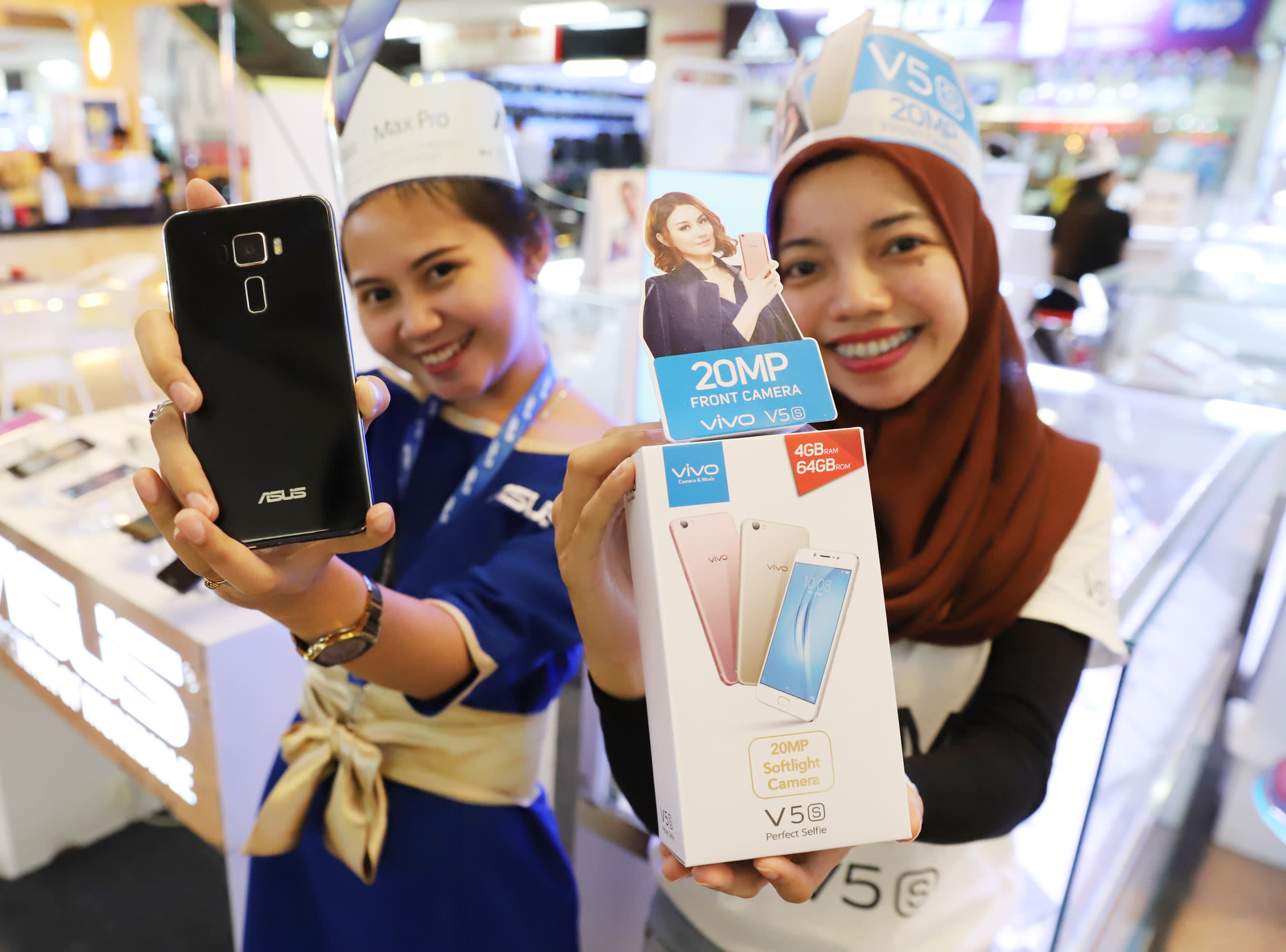 BANGKOK On a recent Saturday morning, the MBK Center, a regional mecca for electronic gadgets in the heart of the Thai capital, was crowded with young technology buffs. Just days earlier, Apple had unveiled its iPhone X, but despite the worldwide buzz over the tech giant's latest smartphone, a starting price tag of $999 means the high-end handset will struggle to find a broad audience here -- or anywhere else in Southeast Asia.

While the iPhone and Samsung Electronics' Galaxy lead the global smartphone market by sales, Southeast Asia's consumer landscape is a different story. In a region home to some 600 million people, Chinese vendors are gaining ground -- one in five smartphones shipped locally are Chinese brands.

In the MBK Center, small smartphone shops stand cheek by jowl, enticing young customers with the latest products. One store owner, Suwimol Khongsiriphaiboon, began offering Oppo and Vivo smartphones three years ago after becoming acquainted with the brands in China.

Both are produced by the Guangdong Province-based BBK Electronics, and both were almost totally unknown in Thailand until recently. But today, Suwimol said, they are some of her best-selling products. Chinese brands, including Oppo, Vivo and Huawei, account for about half of the 70 handsets her shop sells every month, and the shift in customer demand to Chinese smartphones has been much swifter than Suwimol could have imagined. "Oppo and Vivo are now very popular brands, thanks to effective advertising using famous Thai actors and actresses."

The most expensive Chinese smartphones are priced at around $500, and with 20-megapixel cameras and high-resolution liquid crystal displays considered standard, these are not outdated knock-offs of earlier Samsung and Apple models, either. At Suwimol's shop, Vivo's V5Plus is available for 12,000 baht ($362), a little over half the price of the Galaxy S7.

GAINING GROUND The rise of Chinese smartphones is not confined to Thailand. In Vietnam, Oppo's market share has already surpassed 20%, second only to that of South Korea's Samsung. Consumers in emerging markets, where budgets for smartphones are limited, increasingly see Chinese brands as an attractive choice.

Ngoc Lan, a senior student at a language university in Ho Chi Minh City, was looking for a smartphone that fit her 3 million dong ($132) budget. "The affordable smartphones, such as the Oppo, are similar to iPhone and Samsung products in their model, form, style and color. These products are just right for teenagers and students," she said. 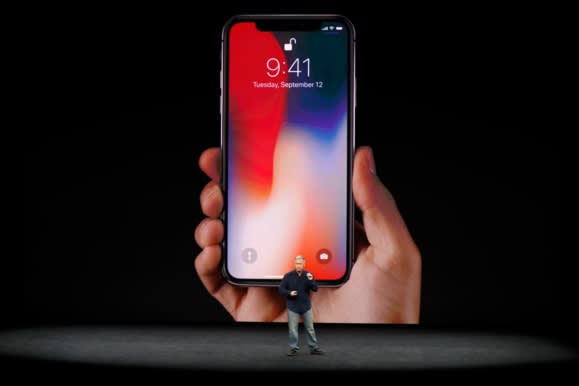 Priced at $999, the iPhone X is beyond the reach of most consumers in emerging Asia.   © Reuters

The rapid rise of Chinese brands has radically altered the competitive landscape of Southeast Asia's smartphone market. According to research company IDC, total smartphone shipments in six emerging Southeast Asian countries, including Thailand and Indonesia, increased 4.3% on the year to 101.3 million units in 2016. Samsung, the world's largest smartphone maker, was also the top player in Southeast Asia, with a 23% market share. But the second and fourth players were Oppo and Huawei, both Chinese companies. The combined market share of Oppo, Huawei and compatriot Vivo came to 21%, closing in fast on Samsung's lead.

The market has changed drastically in just a few years. In 2012, Samsung was by far the biggest player with a market share of 37%, more than double that of second-ranked BlackBerry. Third-ranked Apple held an 11% share, a record high for the U.S. company in the Southeast Asian market. By 2016, according to data compiled by IDC Asia/Pacific senior market analyst Jensen Ooi, Apple had fallen to sixth, with a market share of 4.5%.

"All these [Chinese] brands are not inferior to Samsung or Apple anymore. They have succeeded in pushing their brands up in the market," said Ooi, noting that most fast-selling smartphones in emerg-ing Southeast Asia had price tags of $200-$400. China's Xiaomi recently unveiled a razor-thin smartphone, the Mi Mix 2, which features an LCD panel that stretches to the device's edges and a high-resolution camera. The price of this new flagship model is 3,299 yuan ($504), still half that of the iPhone X.

These developments demonstrate the competitive edge of Chinese brands in a market where commoditization -- the narrowing of difference in function, quality and other factors between competing brands -- has progressed rapidly.

HEATING UP To expand their clout, Chinese smartphone companies have developed marketing strategies tailored to Southeast Asian consumers. Mark Xing, chief executive of Thai Oppo, said his company's advertising strategy centers on the quality of the cameras on Oppo devices and primarily targets selfie-snapping female consumers in the 15-to-30 age bracket. "Their desire is to look more beautiful and charming [in their photos]," Xing said.

His strategy has borne fruit, with women now making up 60% of Oppo users in Thailand. Thai Oppo said it began to see local smartphone shops approaching it for deals. Two years ago, fewer than 2,000 stores in the country were selling its smartphones. The number now exceeds 10,000.

Chinese smartphone companies are also known for their aggressive retailing tactics. At Suwimol's shop in Bangkok, customer who buy a Vivo V5Plus receive wireless earphones, a car charger, a protective case and a screen-protecting sheet of film for free.

Competition among Chinese companies is also intensifying. Xiaomi, which so far has been selling its products directly to users online in Malaysia, started pushing its devices through dealers in May to compete with Oppo and Vivo. It opened its first retail experience store in Penang and is planning to open another in Kuala Lumpur by the end of the year, allowing the brand's followers, known as "Mi fans," to try out other home appliances.

Under a recent regulatory change, smartphones sold in Indonesia, the biggest market in Southeast Asia, are subject to a 30% local content requirement. Many foreign smartphone makers have cleared that requirement by entrusting production to Indonesian manufacturers. Samsung meets the proposed rule thanks to newly installed smartphone assembly lines at its home appliance plant in West Java. 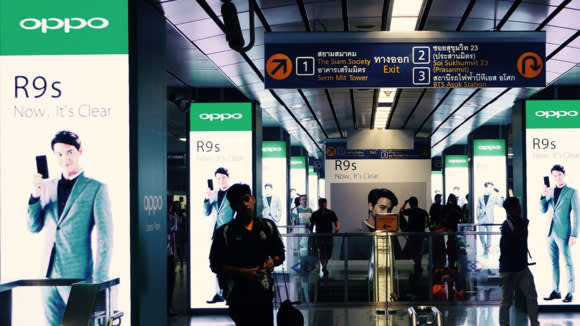 Apple has occasionally been forced to delay the release of new iPhone models in Indonesia because of its failure to satisfy the local content requirement. The iPhone 6s, which went on sale in September 2015 in the U.S., Japan and elsewhere, was not released in Indonesia until this year. To avoid a similar setback, the company plans to open a software research and development center in Indonesia, possibly in October.

The seven countries of emerging Asia, which include Indonesia, Thailand, Vietnam, Malaysia and India, will see total smartphone sales reach 234 million units in 2017, an 11% increase on the year, according to market research company GfK. The rise of Chinese brands shows they are willing and able to meet this demand.

OUT OF REACH It appears unlikely that the latest iPhone will lure back Indonesian and other Southeast Asian consumers who have already embraced Chinese handsets. The new iPhone models recently unveiled in California made it clear that Apple is determined to keep pushing the envelope in terms of technological sophistication. The commensurately hefty price tag will make it hard for the company to claw back ground across the region.

Back at the MBK Center, a group of six young men hanging out on Saturday said they all owned the iPhone 6, which was released three years ago. Students at the time, they had all asked their parents to buy them that model. Now that they are working, they will need to buy their next smartphones themselves. Asked whether they would buy the iPhone X when it hits the Thai market in the coming months, all six said it was far too expensive for their budgets.