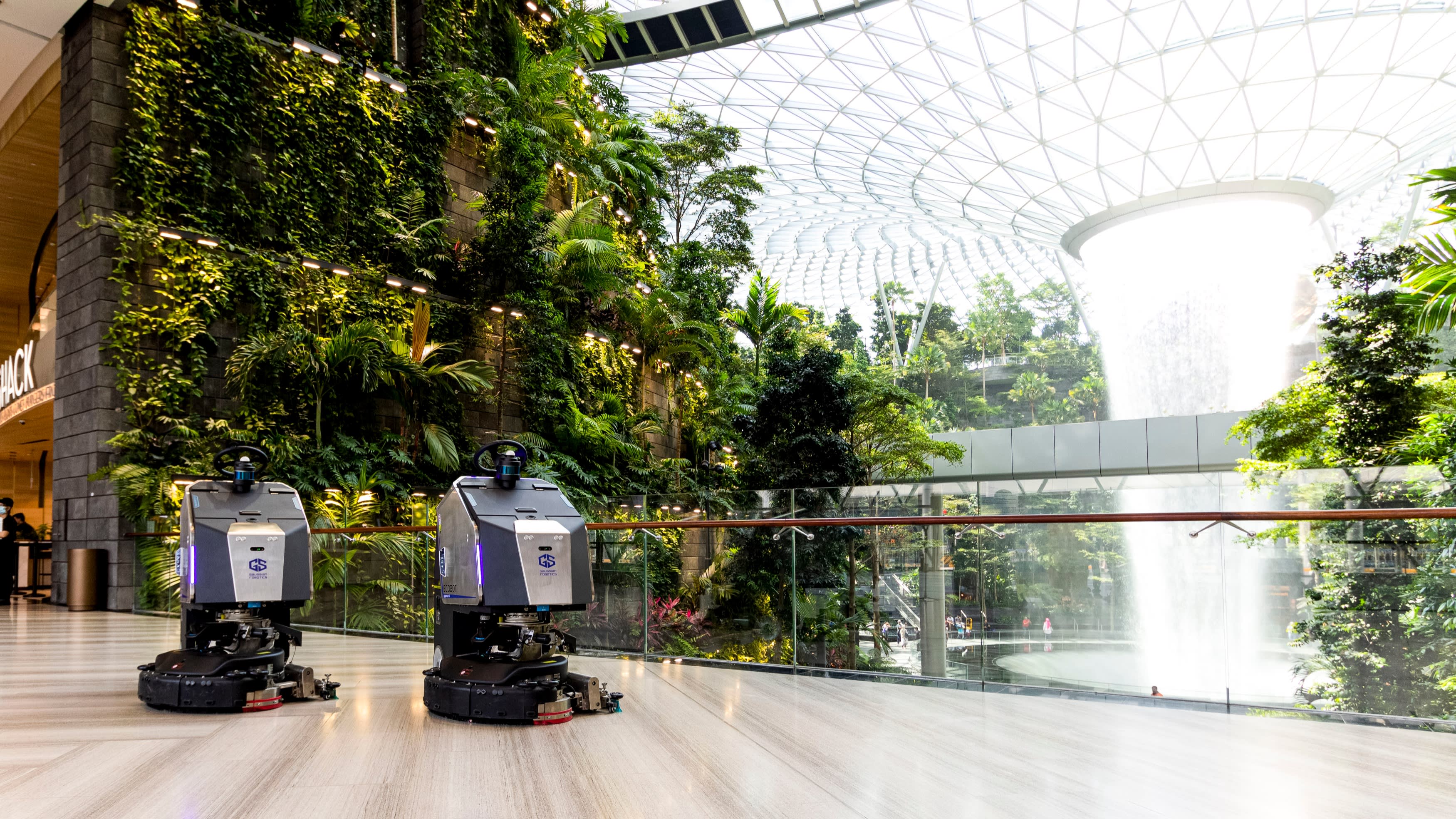 Founded in 2013, Gaoxian Automation has developed a broad array of cleaning robots for business use and become the first in the industry to offer robotic cleaning solutions using simultaneous localization and mapping, or SLAM, technology.

When they operate in an environment where they cannot rely on GPS, such as indoors, robots can use SLAM to build their own maps as they work. The technology allows them to know their position by aligning sensor data they collect with that already collected to create a map for navigation.

The company's army of robots can carry out various cleaning and sanitizing tasks, including wiping, sweeping, scrubbing, floor washing and disinfection.

It currently offers six series of products. The Ebot Scrubber 75 series are scrubbing robots good at removing grease both indoors and outdoors, while the Ebot Scrubber 50 series are fully automated scrubbing machines for indoor tasks and are capable of medical-grade disinfection. The Ebot Polistar 60 series are indoor polishing robots for stone maintenance, while the Ecobot Sweep Vacuum Mini is an autonomous sweeper for multi-story buildings. The Ecobot Sweeper 111 is an outdoor sweeping machine, while the Ecodrive Sweeper G2 is an outdoor unmanned cleaning vehicle.

Cheng conceived the basic concept of his business when he realized that cleaning, a process composed mostly of the repetition of simple tasks, is fit for automation. He saw great business potential in the idea because of the rapid aging of the Chinese population. People aged 55 or older account for over 70% of cleaning workers in the country, who are estimated to number more than 10 million. The sector is facing a shortage of workers and rising labor costs.

Technologically, core algorithms for cleaning robots are improving daily, while production costs of core components are falling. Thus, a confluence of factors has created a situation ripe for launching a large-scale cleaning robot business.

Gaoxian Automation's cleaning robots can already carry out tasks at higher levels of quality than humans and their operating efficiency is four times higher.

The company's sales have been expanding at a torrid pace in the past several years, achieving a maximum annual rate of 400%. It has sold its products and services to more than half of the 50 largest commercial property developers in China.

Since Gaoxian Automation has its own factory, it can frequently upgrade its offerings, once every six months on average. More than 40% of robots made by the company have been exported to 30 overseas markets.

Gaoxian's cleaning robots that have been shipped so far have recorded a combined total of over 100 million kilometers in their cleaning operations.

The company raised funds in a Series A round of venture capital financing in May 2018 and conducted a Series B round in March 2019.

BlueRun Ventures, an early-stage venture capital company, has been on the list of investors for each of Gaoxian's financing rounds.

Cao Wei, general manager at BlueRun Ventures, says Gaoxian stands out from the crowd because of its ability to offer full-line solutions. With a workforce of over 400, the company can develop and manufacture products as well as distribute them to customers while offering high-quality after-sales service, according to Cao. Further, he says It has already achieved a respectable scale of operations.

Broad Vision Fund, which provided capital in the robotics company's Series B+ round, negotiated a deal with a Chinese local government that allowed Gaoxian to build its own plant in Jiangsu Province. The factory has helped the company ramp up output sharply, thereby slashing production costs.

A Broad Vision Fund executive in charge of investment says the fund has been closely monitoring Gaoxian's efforts to keep lowering production costs. If the company can offer products that allow customers to recoup their investment quickly, its sales will grow further at a quick pace, the executive points out. "As we expected, Gaoxian achieved this goal faster than its competitors."

An investment manager at China Capital Management, another Series B+ investor, says the fund has bet on Gaoxian's ability to develop practical, commercially viable products. "We highly rate the company's excellent management team, technological strength, clear product concepts and established sales channels both at home and abroad and efficient supply chain that enables mass production," the manager says. "It will certainly grow further in the coming years."