BEIJING -- MicroTeam, a Chinese startup that uses artificial intelligence to enhance the digitization of soccer, has raised tens of millions of yuan in a series A1 funding round, 36Kr has learned.

The funding was led by three investment companies based in Beijing, Shanghai and Shenzhen. The money raised will be spent on expanding supply chains in five to 10 countries among MicroTeam's target markets, as well as on updating and developing algorithms.

MicroTeam is building a platform for the digitization of soccer data that uses cloud computing technology and AI. The company has partnered with organizations affiliated with many world-renowned soccer clubs, including Spain's Real Madrid, Arsenal of England and AC Milan of Italy.

The company is engaged with the digitization of soccer matches, youth training and remote coaching at the request of the well-known Coerver Coaching soccer school, the European headquarters of sports entertainment brand EA Sports, the Football Association of England and the French Football Federation. It is seeking to tap into demand for "AI football," along with China's Education Ministry, the Chinese Football Association and other Chinese experts.

MicroTeam developed soccer-specific algorithms and flexible printed circuit boards four years after the company was founded, and released three types of AI soccer cleats in China and overseas in May 2020.

The cleats are designed for all age levels, and are aimed at both amateurs and professionals, with prices ranging between 1,388 yuan and 2,688 yuan ($212 to $410) in China. The company will soon offer cleats priced under 1,000 yuan.

MicroTeam CEO Li Youchun says the company's cleats, which link players to the ball, are the key to creating accurate data about what is happening with the ball on the pitch. The cleats, which are equipped with sensors, flexible printed circuit boards and AI algorithm technology, yield data for various settings, including matches, youth development and training, through remote sensing.

During matches, MicroTeam's cleats collect hundreds of data points -- ball contact, running, dribbling, combinations and other movements. Players and coaches can choose the type of data they want to track to deal with specific issues and formations. The data can also be visualized and shared on social media. 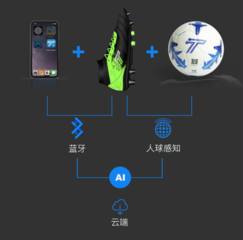 Collected data through MicroTeam's AI platform can be checked on a smartphone. (Photo courtesy of Micro Team)

Li says the market for soccer data has thus far not grown much, despite the potentially enormous number of users, because soccer involves complicated drills, which makes it difficult to obtain data which integrates the movements of the players with that of the ball.

Soccer is an intense team sport. There are said to be 32 positions that players may each take per second, and there are 1,132 movement combinations that a team of 11 players can take on the pitch every second, including ball contacts, dribbling, passing and positioning. In a soccer match where 22 players run around the pitch, obtaining data that connects the players and the ball is extremely difficult.

The spread of 5G networks, along with improving chip processing capability, edge computing and cloud computing, has enabled the development of AI-driven soccer.

Embedded with flexible printed circuit board-based edge computing chips, MicroTeam's AI cleats gather accurate real-time data from such modules as ball sensors, accelerometers and gyroscopes to present a picture of the changes in players' movements and posture over time. The data collected will have strong time characteristics and many advanced deep-learning models, including recurrent neural networks and long short-term memory, will support the network's memory mechanisms.

The company is tapping an ocean of soccer-related big data and intelligent device markets with its cutting-edge sensing technology and smart devices.