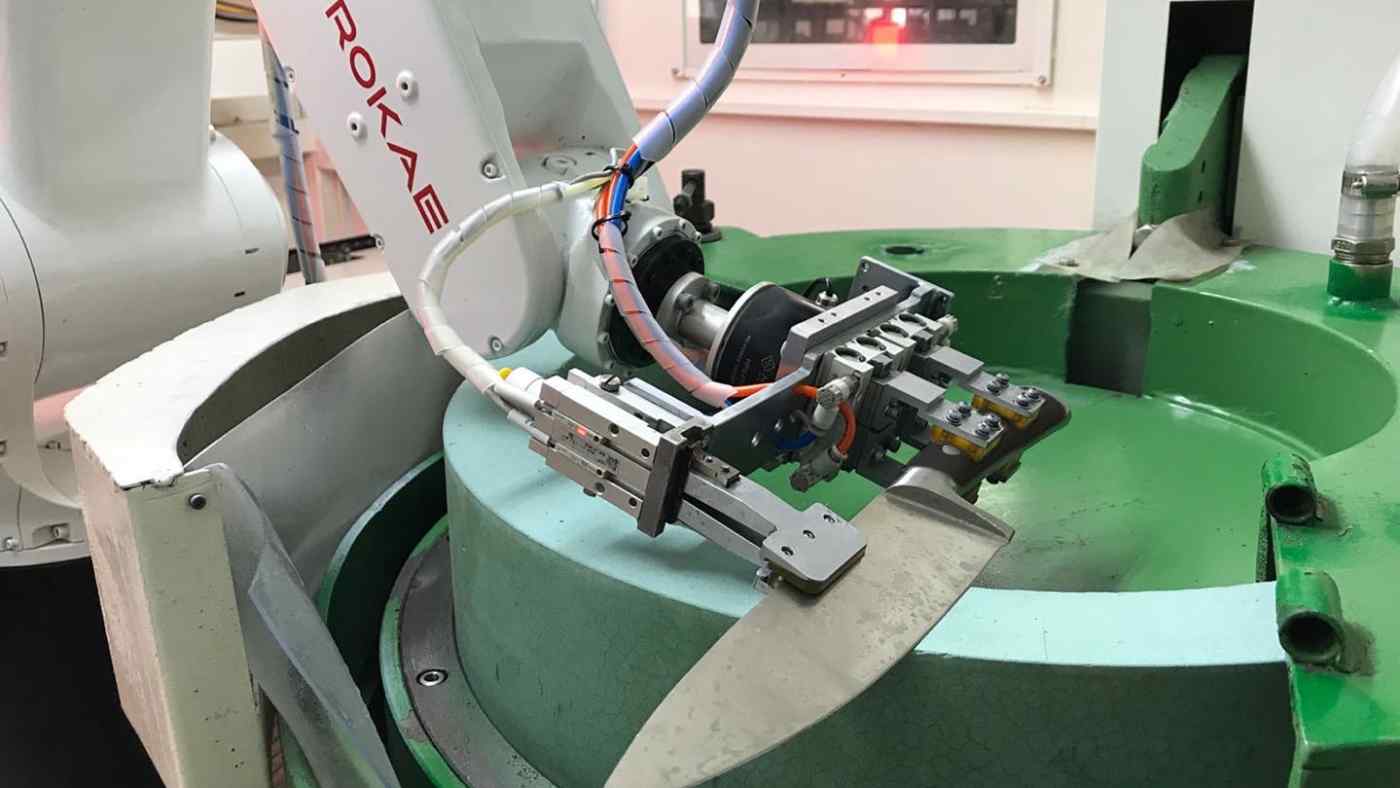 BEIJING -- Ubiquitous and as straightforward as a utility bill, scissors and knives are actually quite complex instruments if one considers their manufacture.

Making cutting tools is largely manual work. From roughcasting and welding to grinding, polishing and sharpening then ultimately being tested, production is very hands-on.

But Beijing-based robot startup Rokae is cutting corners, using robots that do away with most direct human input. A strange, 21st-century turn in light of its partnership with Zhang Xiao Quan, a Chinese cutting-tool maker with a 400-year history.

Rokae has two robot-powered products: a station for sharpening and another for wet grinding, polishing and deburring.

According to Rokae, the wet grinding station automatically feeds materials to the robot within 10 seconds, pushing the operating rate -- or ratio of products produced to products that can be produced -- to 95%. Meanwhile, the sharpening station can raise efficiency by more than 50%.

The company also touts the uniformity of its output and consistent yield. Robots apply the same grinding techniques to give blades a uniform shape, normally a difficult task for a manual workforce due to varying levels of skill, experience and mental acuity. This robot-human difference affects yield.

Key to the process, according to Wang, is grinding precision and uniformity, which depend on the pressure the grinding tool exerts. Next is the quality of sharpening work, which relies on the skill of craftsmen, a step that Rokae has programmed into its robots from reams of analog data.

Finally, since there are many types of cutting tools, each with its own complex production process, robots must perform stably.

Importantly, Rokae robots can accurately control the amount of force needed to grind, sharpen and polish materials. Its proprietary AutoGen smart visual planning system determines robot movements and auto-corrects itself. This has made it possible to automate sharpening, deburring, polishing and other processes.

The company's engineers conducted research with accomplished grinding craftsmen and specialists to understand the necessary processes.

Flexible operation is another feature of Roake systems. The sharpening and wet grinding stations can sharpen, deburr and polish blades between 12 cm and 30 cm long. The processes are also modular, allowing different types of cutting tools to be ground and sharpened via the AutoGen system.

In the company's floating grinding mechanism, expendable grinding tools and materials -- such as files and polishing brushes -- are customized to deal with rough materials. Also, a wet-grinding system exchanges production data with a robot control system in real-time, ensuring the uniformity of each ground blade.

Especially notable is the company's high-performance control system, in which a robot controls vibrations while grinding. Products are also dustproof and waterproof.

In addition to grinding, Roake has automated the deburring of complex parts like pistons and cylinder blocks, and grinding and polishing castings, plastic products and guide rails.

In 2019, the company entered into a strategic partnership with Mirka, a Finnish company that is the world's leading supplier of expendable grinding tools and materials.