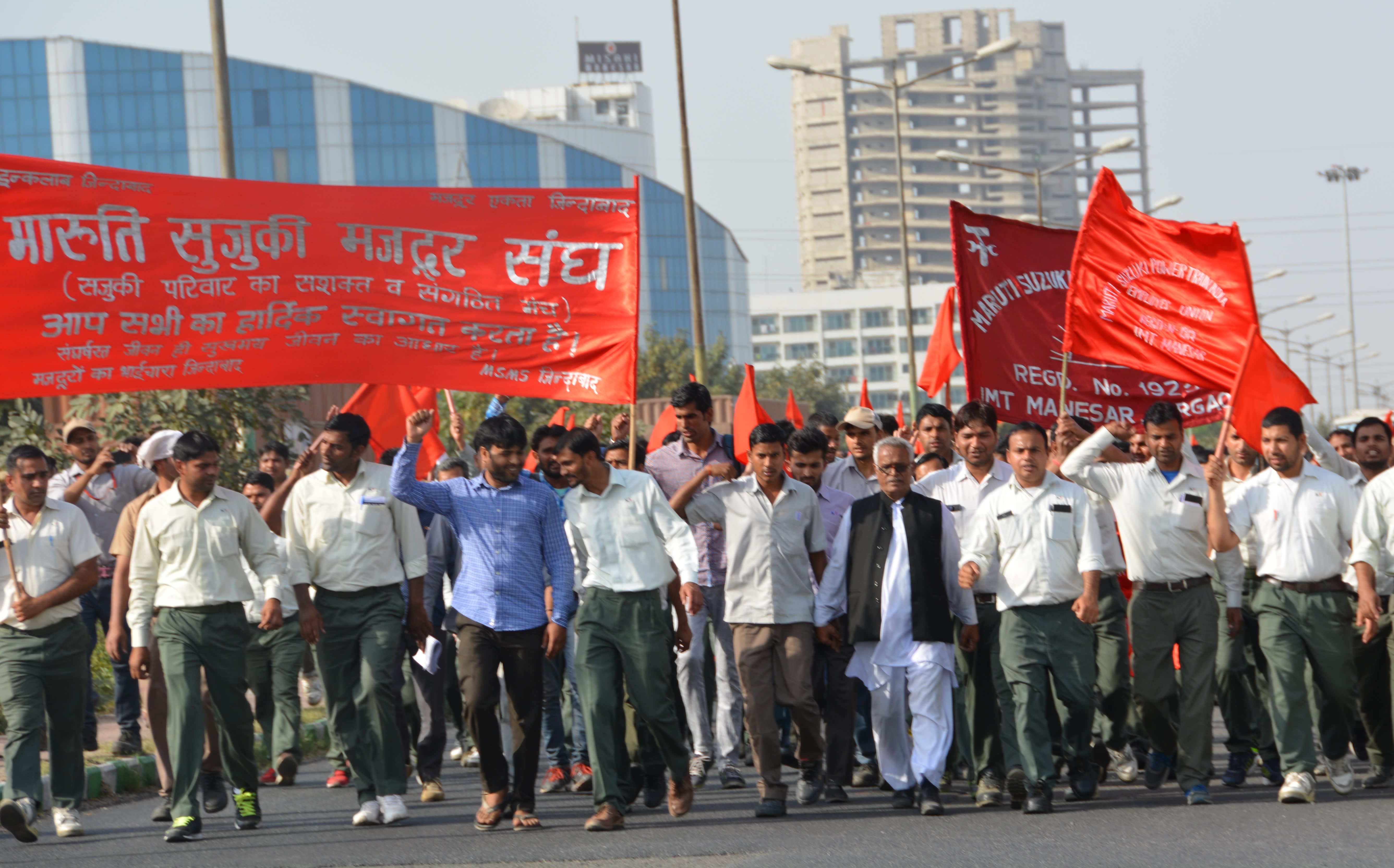 A total of 148 workers had been arrested after the uprising took place, most of whom had been released on bail after sitting in jail for three to four years.

On March 18, 117 of the 148 who had been arrested were acquitted. Of the remaining 31 workers, 13 were sentenced to life imprisonment, four received five-year terms and the remaining 14 were deemed to have served sufficient time before having been granted bail.

The rulings were handed down by a court in the northern state of Haryana, where the plant is located.

All 148 of the arrested workers were terminated by the company after the incident.

The revolt came as a shock. Suzuki had been thought of as "an honor student" among foreign-funded companies.

Management of Maruti Suzuki, India's largest passenger carmaker, 56% owned by Japan's Suzuki Motor, had described the protest as "an orchestrated act of mob violence" and shut the plant for a month citing safety concerns.

The violence broke out on July 18, 2012, when a workers' union demanded that a suspended colleague be reinstated. Before the incident, the workers had also been seeking a wage hike and other benefits.

Maruti Suzuki claimed the workers used iron rods and door beams from cars to beat managers, that they damaged property and then set fire to offices.

The workers allege company-hired thugs started attacking them first on the fateful day.

Awanish Kumar Dev, a human resources general manager, was burned to death, and 96 supervisors and managers were injured during the riot.

The ruling came days before March 23, "martyrdom day" in India, when the 1931 hanging of three freedom fighters is recalled. India was under British rule at the time. Hundreds of MSIL workers from the Manesar plant chose that day to protest the verdicts against their former colleagues. Led by the Maruti Suzuki Workers Union, as well as colleagues from elsewhere in Haryana, they went on a 4km protest march. Workers and their advocates gather at Maruti Suzuki's Manesar factory, where they began a demonstration on March 23. (Photo by Kiran Sharma)

As they converged in an open area, workers from other unions joined in support. In all, more than 5,000 marchers showed up.

"They [union leaders] keep on doing such things," a Maruti Suzuki executive said, playing down the rally. The executive said that by raising their voices in such a way, the workers were acting in "contempt of court."

The executive asked for anonymity.

Kuldeep Janghu, general secretary of the Maruti Udyog Kamgar Union, which represents workers at another plant, in Gurgaon, Haryana, said the workers were not criticizing the judiciary as such but were questioning the investigation into the 2012 incident that, he alleged, only took into account management's claims.

"It was a one-sided probe," said Janghu, whose union holds influence over other Maruti Suzuki unions. "For long, we have been seeking a judicial inquiry, but this hasn't happened."

The Nikkei Asian Review talked to two workers from Maruti Suzuki's powertrain plant in Manesar who participated in the protest. "Now our unions are powerful [as compared to 2012] and are working for our welfare," one said.

Said the other, who has been attached to the company for a decade: "When I joined the company, no one cared for our rights. The working environment was poor. We were enduring longer working hours and were given just a 10- to 15-minute lunch break every day. But now we have a proper 30-minute lunchtime and a couple of 10-minute breaks to relax during the 9.5 hours we spend working in the plant."

The 2012 violence highlighted the need for a strong and regular communication channel between Maruti Suzuki workers and management. And it seems both sides have learned this lesson, at least going by the descriptions of today's working conditions that some of the marchers offered.

Before the 2012 riot, Maruti Suzuki's Haryana plant had been the site of worker unrest for quite some time. So when it came time to set up a manufacturing plant, Maruti Suzuki and its parent company plopped the new facility down in the industry-friendly western state of Gujarat.

The Manesar violence could have scared foreign investors away from India -- and especially Haryana -- but Modi, who came to power in May 2014, has instead managed to buff up the country's attractiveness.