A forest among Tokyo's office towers

How contractor Taisei convinces clients to leave some green space TOKYO -- Japan's capital is still a sprawling concrete jungle. But at least one contractor is trying to convince its clients to make a little space for birds and trees.

While urban green spaces are nothing new, Taisei is focusing more on bringing back nature and biodiversity rather than on making an aesthetic statement.

To help in this regard, some company representatives carry tablets around with specialized software. The program keeps data on regional species to showcase the green space benefits that clients might be able to expect.

Let's look in as a Taisei representative, a tablet in one hand, meets with landowners and other parties where a large redevelopment project is planned. "If you create a forest here," the representative says, "these organisms are likely to come by."

The tablet has a program whose name roughly translates as "living creature concierge." The tool predicts specific species from three categories of living things --birds, butterflies and dragonflies -- that could fly over or even decide to make a potential green space home.

Regarding birds, the chances -- from "small" to "big" -- that Japanese white-eyes, great tits or thrushes might frequent a Taisei green space are represented by one of three symbols.

Until now, the software has been used to propose biotope bodies of water on the grounds of factories or laboratories. Developed three years ago, it now is being deployed for urban planning.

Nanako Suzuki of Taisei said the software simply shows whether a particular living creature might drop by so people can visualize "without having to think hard." 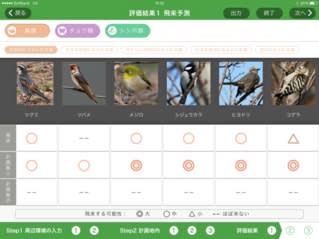 The "living creature concierge" shows how likely certain birds are to swing by parts of cities that might get nature makeovers.

By the end of the year Taisei will have a similar tool -- a "forest concierge" program that will keep a database of plant species fit for habitation in a certain region.

Users first check for the kinds of trees and grasses that grow in a surrounding area and input the data. The program will thus be able to "see" the greenery as well as a planned green space as one forest. It can then identify the tree, grass and flower species that are missing.

If an area already has tall trees, then adding shrubs and grassland would make for an optimal ecosystem.

The two programs can also be deployed together to expedite the consulting and planning processes.

Going green got a push in 2010, when the 10th meeting of the Conference of the Parties (COP 10) was held in Nagoya, Aichi Prefecture. The Environment Ministry's guideline for biological diversity, compiled during the meeting, has since helped to gradually spread the concept of biodiversity among companies and local governments.

Buying the luxury of time

Taisei has been a pioneer adopter among construction companies. Sapporo Dome, constructed in 2001, has an eco-friendly green space on its property. During the past 15 years' worth of observations, the number of bird and dragonfly species there has doubled.

Taisei's signature green space in Tokyo is Otemachi Forest, co-developed with Tokyo Tatemono on the grounds of the Otemachi Tower high-rise in Chiyoda Ward. The 3,600-sq.-meter "forest" occupies one-third of the total site and is home to more than 100 kinds of trees.

Otemachi Tower was completed in 2014. In front of the edifice are ferns that are typically not planted in artificial gardens and trees that grow crooked.

Naoko Hanita, who heads the biodiversity and assessment section of Taisei's environment division, said a massive project like Otemachi Forest requires a lot of time for research and planning.

Suzuki said it took "more than a year" to analyze the habitat information and study the terrain under Otemachi Forest.

But an entire year is a luxury that not all projects can afford. This is where the company's tablet visualizers come in. They offer a simple and easy method of giving potential customers a picture of what greenery might do for a space.