The Strand Hotel in Yangon is undergoing its first renovation in 25 years. (Courtesy of The Strand)
KATE MAYBERRY, Contributing writerNovember 10, 2016 12:00 JST | ASEAN
CopyCopied

YANGON The first time Tin Aye Khine stepped into the lobby of The Strand, a landmark colonial-era hotel in Myanmar's commercial capital, the 39-year-old was so awestruck she was afraid to walk on the marble floor.

That was more than 15 years ago. Now, Tin Aye Khine is the hotel's front office manager, eagerly awaiting the return of guests in November after a six-month renovation that required the closure of the entire property. 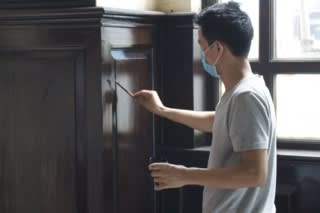 A worker restores the wood paneling for which the bar is famous. (Photo by Kate Mayberry)

"This hotel is different," she said in an interview, as she recalled the first time she stepped across the threshold. "When you enter through the main door, the feeling is 'wow.'"

Built in 1901, The Strand established its reputation under the Sarkies brothers, the renowned Armenian hoteliers behind the Eastern & Oriental Hotel in Malaysia's Penang State and Raffles Hotel in Singapore. In the first half of the 20th century, with its colonnades, lofty ceilings, and cane chairs, The Strand was the epitome of colonial style -- "the finest hostelry east of Suez," according to John Murray's "Handbook for Travellers," published a decade after it opened -- and a home away from home for the likes of British writers Somerset Maugham and Rudyard Kipling. It was not until 1945 that Burmese locals were allowed in.

Following independence in 1948 and a military coup that led to a disastrous, nearly three-decade experiment with a planned economy, the hotel slipped into decline, like the rest of the country.

In the late 1980s, after military leader Ne Win had been deposed, the government sold the property to investors including hotelier Adrian Zecha, who had just opened Amanpuri, the first of what would become the exclusive Aman group of resorts. The Strand underwent its first renovation under Zecha's company, General Hotel Management. But even then, increasing oppression by a military junta kept many visitors away.

Now, with the country under a civilian-led government and starting to open up to the outside world, The Strand's first renovation in 25 years is aimed at positioning the property once again among Southeast Asia's best hotels.

"I love this hotel," general manager Olivier Trinquand said in an interview in his temporary office in the main building, as workers in hard hats labored to restore the floor in the corridor. "I know we can absolutely create something special."

The hotel is now owned jointly by GCP Hospitality Management, the hotel management and investment unit of the Hong Kong private equity firm Gaw Capital Partners, and the Ministry of Hotels and Tourism. For the renovation, GCP hired Bangkok-based P49 Deesign and Associates, which renovated The Mandarin Oriental in Bangkok and the Sofitel Legend Metropole in Hanoi. The brief was to update the interiors and incorporate 21st century facilities without compromising the building's historical integrity.

SOMETHING OLD, SOMETHING NEW The result is a renovation that remains true to the original neoclassical building, a three-story structure overlooking the Irrawaddy River. The teak counter of the Sarkies Bar has been restored, the airy Strand Cafe, with its wicker chairs and ceiling fans, has been given a makeover, and the hotel's original marble and teak floors have been reconditioned. The lobby will take on a more club-like ambience, with classic Chesterfield sofas clustered together with black rattan chairs and low tables, and the original wood paneled walls painted a silvery grey.

"We have made every effort to maintain the existing spaces and also the existing architectural details, such as floor finishings [and] wall moldings," P49 Deesign partner Carl Almeida said. "Some pieces of existing furniture will be maintained, with new fabrics and finishing. This was a key strategy for our design. Maintain the existing heritage and then just develop that a bit further to give it more of a relevance to today's aesthetic."

GCP Hospitality declined to reveal the cost of the renovation, citing the involvement of the ministry. It has two other properties in Yangon -- the Thamada Hotel, which will reopen in March 2017 as part of the company's Hotel G midrange brand, and the Inya Lake Hotel, which was built as a gift from the Soviet Union and has changed little since it opened in 1962. There are no plans to upgrade the lakeside property anytime soon.

Throughout The Strand's closure, GCP has kept the 130 staff members on the payroll, dividing one of the hotel's parquet-floored ballrooms into a suite of temporary classrooms and scheduling classes in English, leadership, service and presentation. A 12-seat pop-up restaurant in the Inya Lake was set up to give kitchen and waiting staff the opportunity to hone their service skills. Renovation work underway in the historic Sarkies Bar at The Strand, named after the founders (Courtesy of The Strand)

"We have spent a lot of time on training and the pride of belonging," said Trinquand, who is also vice president of GCP Myanmar and previously worked in China. "We want [The Strand] to be understated luxury. We don't want it to be 'show-off.'"

Although The Strand is opening in time for peak season, it is also a period of unprecedented competition in Yangon's luxury hotel market, with new properties opening and tourist arrivals plateauing.

The average occupancy rate for the city's more upscale hotels fell to a record low of 42% in the first half of 2016, dragging the average daily rate down to $119, according to Colliers International, a real estate group. As more properties open in the coming months, Colliers expects the rate to drop to as little as $107 by the middle of 2017.

Trinquand insisted that The Strand, which started a luxury cruise on the Irrawaddy this year, is in a class of its own and will not compete on price. Forward bookings are looking strong, he added.

The hotel will have 31 suites when it reopens, with an additional 30 rooms plus swimming pool and spa in a modern replacement for its rear annexe, which was built in the 1990s and has just been demolished. The new rooms will not be ready for at least 18 months. The only other hotel of similar style is the Belmond Governor's Residence in the embassy district, which is clustered around the garden of an old teak mansion. The other top-class hotels are modern high-rise buildings run by international hotel management companies.

"We have a real identity," Trinquand said. "The Strand is The Strand, with all the imperfections that we have. We are, I believe, genuine luxury."

Yangon's city center, which stretches away from the river toward the iconic Shwedagon Pagoda, is full of historic buildings, many of them left empty after the government began moving to Naypyitaw, the new capital, in 2005; others are crumbling in the humidity.

The Yangon Heritage Trust, an urban advocacy group, has been cataloguing the buildings and working with the authorities to prevent the demolition of historic structures and encourage sympathetic renovation. It has proposed the rehabilitation of the waterfront, which would remove the loading bays and docks that currently crowd the quayside, creating a park and restoring the hotel's river views.

The Strand is a "significant building" and together with its neighboring buildings (one is now an office for Myanmar National Airlines) makes the parade "an important feature in Yangon's cityscape," trust director Moe Moe Lwin said. "We do hope [the design] is handled with high professional standards," she said.

The scaffolding that has cocooned The Strand since April is being removed, and Tin Aye Khine, who recalls with excitement meeting Rolling Stone Mick Jagger when he visited the hotel in 2003, will be standing by, ready to welcome the latest guests into the elegant confines of its marble-floored lobby.