ZURICH -- The Fourth Industrial Revolution will boost productivity and thus prosperity, as well as play a key role in tackling such challenges as climate change, said Ulrich Spiesshofer, CEO of ABB, a power and automation technology company.

Spiesshofer talked with The Nikkei about how Switzerland's qualities, including an enviable education system, position it at the vanguard of this wave of technological change. Excerpts from the interview follow.

Q: Which countries are competitive regarding the Internet of Things (IoT)? A report from UBS said that Switzerland, where ABB is headquartered, is No. 1 in a comparison of competitiveness in the Fourth Industrial Revolution. Could you give me some idea of why the revolution is favorable for Switzerland?

A: The key drivers of the fourth industrial revolution are the increased availability of data, ubiquitous connectivity between and among machines and people, and the exponential growth in processing power. Advances in robotics technology, exemplified by ABB's YuMi -- one of the most advanced industrial robots in existence today -- are enabling a new era in human-robot collaboration, for instance in small parts assembly. 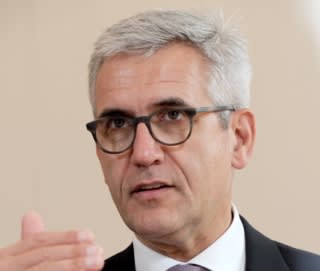 At ABB we believe firmly that we need this revolution if we are to master global challenges such as climate change and to improve the lives of hundreds of millions of people who still lack access to electricity and who are deprived of opportunities to improve their lives.

We expect this revolution to deliver a substantial productivity improvement in industry, with a commensurate increase in prosperity.

Switzerland is an advanced economy, open to technological change, with a large number of highly-agile midsize industrial companies, and one of the best education systems in the world. Because it is a high-cost country, it has constantly had to take advantage of opportunities in automation and companies are keen to apply this technology on the industrial side.

Q: So the role of humans is much more important in the Fourth Industrial Revolution, or Industry 4.0.

Q: Some still fear that Industry 4.0 will lead to fewer jobs.

A: I don't think the anxiety is justified. Since the first industrial revolution, there has always been a shift in jobs. When automobiles came in, horse-carriage drivers lost their jobs. When robots moved into automotive factories the job of welders disappeared. But the automotive industry employs more people than ever before today.

The three countries in the world with the highest level of automation -- South Korea, Japan and Germany -- have the lowest unemployment rates. Industrialization and automation do not destroy jobs; rather they create competitiveness and wealth, increasing prosperity for the countries in question.

Q: According to the UBS report, Sweden is ranked 10th. How do you evaluate the current situation there?

A: Like Switzerland, Sweden benefits from a good education system. In addition, it has strong middle-class entrepreneurs. The demand for robot solutions is very strong. Therefore, I think there is a great opportunity for us.

Q: UBS said that Germany, your home country, is lower. What's the difference between Switzerland and Germany?

A: If you look at the automotive industry in Germany and what it has achieved in terms of automation, I think it is absolutely leading-edge and leading from the front. But there are other industries like the consumer electronics industry where Germany is facing headwinds because of the combination of high labor costs and high energy costs. However, with its strong education system, the apprenticeship system, the technical universities, the scientific universities, mathematics, information technology, natural sciences and technology, Germany has a very strong foundation on which to build.

Q: Who will be the main competitor in IoT areas? GE, Google or Cisco?

A: I see three categories of competitors: 1) traditional industrial companies like GE, Siemens or ABB; 2) newer competitors from emerging economies, which are very strong; and 3) "disruptive" new entrants that bring a completely different mindset -- they don't have physical assets and might only have control or data analytics.

In such an environment, the art is to compete in the right way. In certain segments, we have chosen to work together with Microsoft, for example. Its horizontal capability on cloud-based analytics and storage combined with the domain space expertise of ABB is a pretty unbeatable combination in certain fields. We at ABB need to make sure that we are the leader in the fourth industrial revolution and that we are the company driving the "Internet of Things, Services and People." We need to strengthen that position organically, to consider partnerships, which we are already doing, and we might also acquire one or other activity to enhance our strength and competitiveness.

A: That could be a possibility. But we need to be disruptive ourselves. And we are. ABB Technology Ventures has invested over $150 million in high-potential industrial technology and energy companies to make sure that we go into new technologies early in the cycle.

For example, we have invested in Vicarious, a pioneer in artificial intelligence algorithms, which also counts Elon Musk, Mark Zuckerberg and other prominent technology investors among its investors.

We believe that the next stage of the fourth industrial revolution will be driven to a significant extent by advances in artificial intelligence, such as machine learning. At ABB, we call this emerging ecosystem -- where machines can communicate and collaborate with human beings but also with each other without the need for human intervention -- the "Internet of Things, Services and People" (IoTSP).