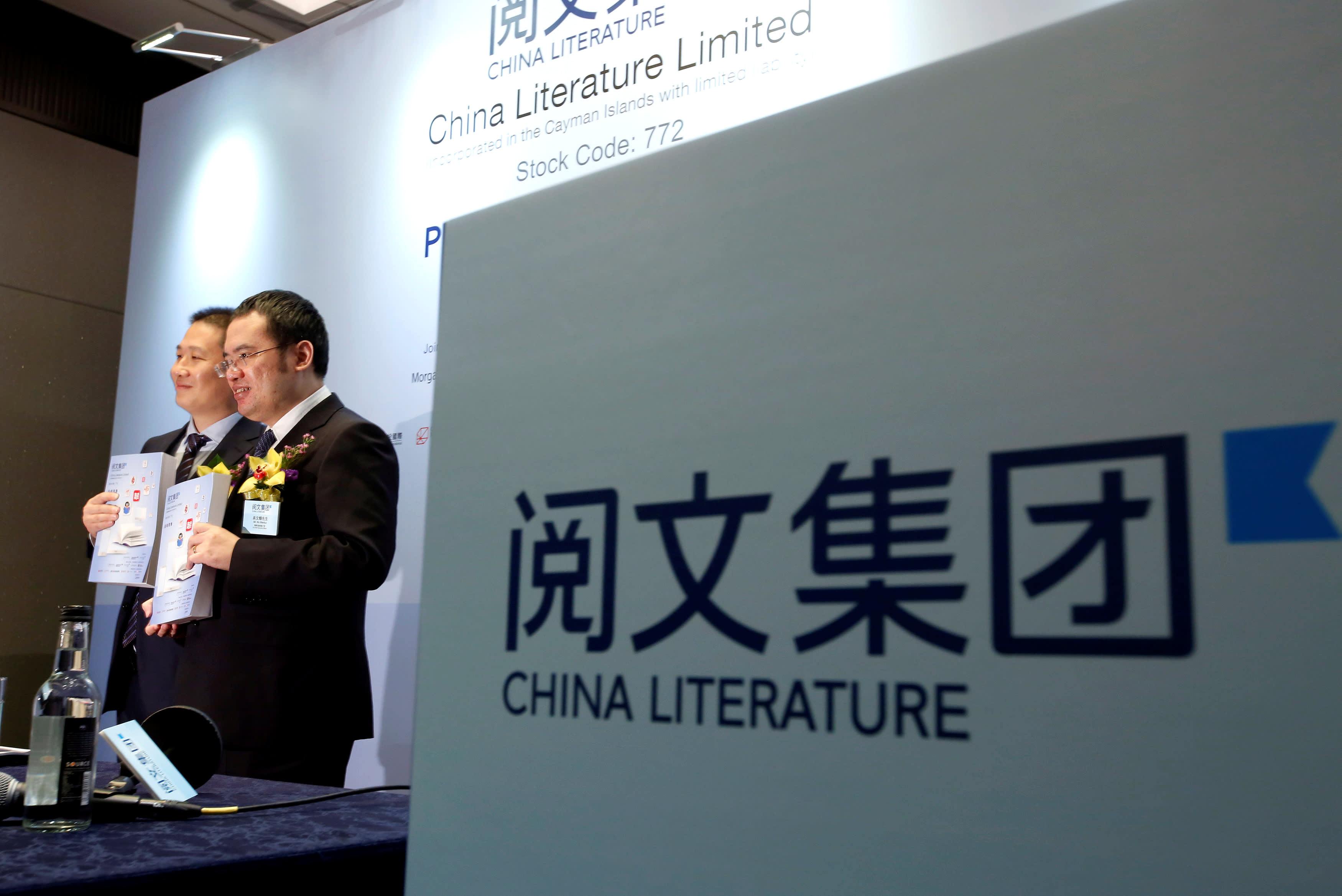 HONG KONG -- Shenzhen-based technology company Tencent Holdings is poised to see seven companies in which it has invested raise $10.1 billion in initial public offerings this year, including its $1.1 billion spin-off of e-publisher China Literature.

Set to start trading on Wednesday, the Shanghai-based online reading platform saw its share offering subscribed by more than 620 times by local investors. The response eclipsed the $1.5 billion IPO in September of China's first and largest insurance technology company, ZhongAn Online P&C Insurance, in which Tencent also has a 10% stake.

Funding commitments to China Literature totaled 520 billion Hong Kong dollars ($66.65 million) for its retail tranche, notwithstanding the absence of cornerstone investments, or sizable preorders from marquee investors that agree to a six-month lock-up. Such investments are widely used by issuers in Hong Kong to ensure the success of their first-time share sales.

To investors, China Literature represents an opportunity to capture the more experience-driven consumption pattern among mainland Chinese. As the largest online reading platform in China, with a market share of 43.2% in 2016, China Literature is well-positioned to ride on the country's booming online literature market, which is expected to grow at an annual compound rate of 30.9% between now and 2020, and hit 13.41 billion yuan ($2 billion).

But its greatest potential, as most analysts point out, lies in its ability to commercialize its growing library of intellectual property -- the adaptation rights of literary texts into films, animation, TV programs, web series, games and other entertainment products. As of June it had amassed 6.3 million writers and 9.4 million literary titles.

Ke Yan, an analyst at Singapore-based online equity research company Smartkarma, pointed out that such monetization in the near term might be constrained by the still fledgling entertainment production industry in China, which will "no doubt" improve. "There will be a lot of room for improvement, especially since China Literature became a dominant copyright owner and its parent Tencent is now participating in entertainment production via Tencent Film and Penguin Pictures," said Ke, adding that Tencent has a 5.5% stake in Huayi Brothers Media Corp., a Beijing-based entertainment conglomerate.

But to a lot of retail investors, the offering came across as an occasion for profit-taking. "Referencing ZhongAn, investors are expecting the stock to surge around 20-30% on the first-day, or even higher," said Alvin Cheung Chi-wai, associate director at Hong Kong-based Prudential Brokerage, referring to China Literature's first trading day on Wednesday.

"One probably needs to subscribe for 100 lots in order to secure one," said Cheung. "When the stock is so scarce, its prices might be bid to a very high level in the first few days," he added, noting that the gray market has priced the deal 40% higher than its current price, which stands at the top end of its indicative range of between HK$48 and HK$55 a share.

Cheung is expecting a less fervent, but still enthusiastic, response for another Tencent-backed IPO being marketed until Thursday -- Yixin Group, a Shanghai-based online automobile finance-cum-trading platform. A spin-off from New York-listed Bitauto, which provides information and marketing services related to China's automotive industry, Yixin is looking to raise up to HK$6.77 billion by floating 878.68 million shares on the Hong Kong bourse.

Although it does not have a cornerstone investor, Yixin, which will be 21% held by Tencent, 11% by JD.com and 3% by Baidu after the IPO, had reportedly prompted HK$65.34 billion of margin financing when its retail book opened on Monday. The sum is roughly half the volume commanded by China Literature, but more than triple that of Razer, an international video game accessories maker, which started selling its HK$3.69 IPO in Hong Kong roughly a week after China Literature's launch.

The fever for Yixin was widely attributed to its "celebrated" investors, as the company saw its net loss widen to 6.11 billion yuan in the six months ended in June, from 647,000 yuan in the same period last year.

Other Tencent-related IPOs this year include the $2.3 billion listing of South Korean mobile game publisher Netmarble Games, the $884 million fundraising by Singapore-based online gaming company Sea, and the $585 million raised by Sogou, the default search engine in Tencent's Mobile QQ browser and qq.com. Tencent has a 22% stake in Netmarble Games, 44% stake in Sogou, and 40% in Sea, the latter two of which are both floated in the U.S.

Including the $3.9 billion IPO of U.S. social media company Snap, in whose second financing round Tencent participated back in 2013, companies in which Tencent has invested raised close to $10.1 billion by going public this year.

Similar spin-offs by Tencent will continue. One likely candidate is Tencent Music Entertainment, valued at $10 billion compared to China Literature's $7 billion, according to Karen Chan, analyst at research company Jefferies. But Chan said these deals served more to lift sentiment for Tencent than act as catalysts to its share price. "The valuation of [an] individual spin-off is still minimal compared to Tencent's large market cap," Chan noted.