SHANGHAI -- China's shopping spree could be over.

"We need to be prepared for more failures when it comes to overseas acquisitions," Y.W. Sun, CEO of China Fortune-Tech Capital, told the Semicon China conference in Shanghai on Wednesday.

Sun said: "The best time for us to buy good chip companies has already passed."

He added that the U.S., Japan and South Korea are wary of acquisition attempts by Chinese entities, as chip technologies are considered critical to industry development and national security.

He warned that the most likely deals to be approved are those of companies with little advanced technology and low value. Instead of looking for potential buyout targets, he said Chinese chip companies should now focus on creating their own technologies and attracting global talent.

China has been struggling to gain regulatory approval for its overseas acquisitions. Some notable botched deals include Beijing-backed Tsinghua Unigroup's unsuccessful bids for Micron, Western Digital, and three other Taiwanese chip assemblers.

Even embattled Japanese conglomerate Toshiba is being selective about potential buyers of its profitable memory business, saying that it won't sell the prized unit to companies from countries that are in political dispute with Japan. This statement was largely seen as a pointed comment aimed at discouraging Chinese suitors. 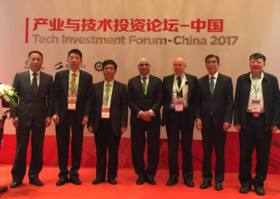 "We do see some limits and obstacles in global acquisitions," Ding said at the same conference. "We can't fully rely on other people but neglect to develop our own technologies."

Wu Ping, head of Summitview Capital and founder of China's leading mobile chip designer Spreadtrum Communications, told Nikkei Asian Review that it wasn't in Japan's and South Korea's interest not to open themselves up as their domestic markets were saturated. His fund bought ISSI, a U.S.-based dynamic random access memory maker, in 2015.

China is eager to build a competitive chip sector to slash heavy reliance on foreign companies such as Intel, Qualcomm, Samsung Electronics, SK Hynix, TSMC and Toshiba. But Chinese chip experts and executives warned that the sector in the country should be further consolidated to avoid excessive investment that could in time cause a supply glut.

From now to 2020, more than 40%, or 26 out of more than 60 across the globe, of advanced 12-inch chip facilities being planned or constructed by either domestic or foreign investors will be in China, according to Semiconductor Equipment and Materials International, a global industry association.

Around the world, there are around 100 12-inch chipmaking facilities at the end of 2016, according to research company IC Insights. Chinese players such as SMIC and Huali Microelectronics control less than five.

"We are not worried about explosive capacity growth in the coming years as there is need and the Chinese market is very big," said Wei Shaojun, professor and director of the Institute of Microelectronics at China's Tsinghua University. "However, we do have concerns that some companies simply invest to build uncompetitive plants that could later lead to a supply glut."

Wei said his country should focus more on research and development and cultivate more talent to work in the industry.