China's Geely keen to bring its cars to the West

HONG KONG -- For China's homegrown automobile brands, the main battleground has thus far been the vast domestic arena, the world's largest market by a wide margin. While these carmakers have purchased foreign brands to expand their global reach, they have made few international inroads with their own marques, mainly sticking solely to emerging markets. But Geely Automobile Holdings wants to change that by putting its cars up against the global majors in what it sees as the "mainstream" markets of North America and Western Europe.

"An auto company that's competitive must go global and must enter North America and Europe," said An Conghui, executive director of the Hong Kong-listed Geely and president of its unlisted parent, Zhejiang Geely Holding Group, at an earnings briefing on Wednesday.

Though he did not offer any details, An said the company's dedication to selling its cars in North America and Western Europe was "unswerving." He said all the company's activities, from research and development to product planning, were "now geared toward this goal." An told reporters after the briefing that Geely will lay out its plans in detail in an announcement at the end of the year.

Still, An dropped some hints about the future. He said, for example, that he is studying the "experiences and lessons of the Koreans," which in the 1990s began transforming themselves from local players dependent on local demand into major global brands. He did not mention any specific companies, but such brands as Hyundai Motor and Kia Motors could serve as likely models. 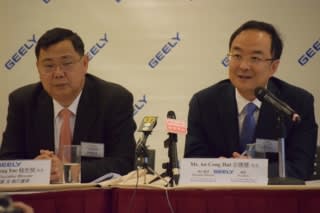 Gui Shengyue, left, CEO of the Hong Kong-listed Geely Automobile Holdings, and An Conghui, president of its parent, Zhejiang Geely Holding Group, told the press of their desire to break into Western auto markets. (Photo by Kenji Kawase)

Just a month ago, Geely announced the launch of a new automotive brand -- Lynk & Co. -- that incorporates the design and technological know-how of Volvo Cars, which the Chinese company acquired in 2010. Geely announced Wednesday that the first models will debut in Shanghai in April. But plans call for selling the cars in North America and Western Europe as early as the first quarter of 2019.

An did not say whether any of Geely's existing cars will also be brought to the two western markets. However, when he was discussing the 15% year-on-year drop in the company's exports in 2016 and the 60% decline in the first two months of 2017, An admitted that Chinese automakers -- implying Geely as well -- were "selling if they had someone buying" and simply chasing volume while giving little thought to enhancing their competitiveness or making breakthroughs. Some of Geely's major overseas markets are Russia, Ukraine and Egypt.

An said the company's new overseas strategy is to "systematically prepare the sales, services, manufacturing and a certain level of localized development." He emphasized repeatedly that all of Geely's Chinese brands were in high demand at home and, furthermore, lack the capacity to be supplied globally.

Geely sold 765,970 cars last year, up 50% on the year. Of that amount, mainland China accounted for 97%. This year, the company aims to boost the total by 31% to reach 1 million units, with overseas sales again likely contributing only a fraction.

Meanwhile, Geely's parent, Zhejiang Geely is in talks on possible acquisition of loss-making Malaysian automaker Proton, owned by DRB-Hicom. During the earnings briefing, Geely CEO Gui Shengyue said he was "not able to make any comment as the listed company is not involved in any of this." He told the Nikkei Asian Review after the briefing that "at this point, I am not clear on how the parent company is negotiating."

Early in March, Zhejiang Geely Founder and Chairman Li Shufu told the Nikkei in Beijing that "although we have contemplated and studied the deal, the anticipated outcome may not be reached." Li was in the capital as a member of the Chinese People's Political Consultative Conference, which was gathering for an annual session.

Regarding market speculation that Volvo Cars is going public, Daniel Li Donghui, vice president of Zhejiang Geely and a board member at Volvo Cars, flatly denied the existence of any such plan. "There is no plan to list Volvo Cars in the first place," Li said.

The speculation began when the Swedish unit issued about $500 million worth of preferred shares to local institutional investors last December. This, according to Li, was done "mainly to strengthen the capital base and does not indicate an urgent need for cash."