BEIJING/HONG KONG -- Chinese personal computer maker Lenovo Group has put together an impressive streak of acquisitions over the last decade. It took over IBM's PC business. It snapped up German electronics manufacturer Medion, while buying out the stake of its Japanese partner NEC in a joint PC venture. All these takeovers have helped Lenovo's transformation from a small Chinese electronics company into the world's largest PC maker by units shipped. But Lenovo's purchase of fading U.S. mobile phone maker Motorola Mobility has raised doubts that all of its takeovers meet with success.

"We will restart it from zero." Lenovo Chairman and Chief Executive Yang Yuanqing promised at the Mobile World Congress in Barcelona earlier this month when he talked about the company's troubled mobile phone business, which posted a 23% fall in revenue to $2.18 billion during the three months ended December 2016.

The performance was not what Yang expected when he bought Motorola from Google for $2.91 billion in October 2014.

Motorola certainly was an iconic brand. It made the very first mobile phone that Yang himself bought in the 1990s. Although it was clearly showing signs of losing its luster at the time of the deal, Yang saw the company as a key platform in expanding Lenovo's mobile business in developed markets.

Lenovo recognized the need to grow outside of the PC sector, its core business accounting for 70% of revenue, as demand slowed. Yang believed the mobile industry provided the answer and he directly jumped into negotiations to conclude the deal for Motorola.

After acquiring the company, Yang reportedly told employees at Motorola's headquarters in Chicago that the deal would help propel Lenovo into global leadership in the consumer electronics sector. Lenovo did become the world's third largest smartphone maker in 2014, taking a 6.9% share of global shipments, behind Samsung Electronics and Apple, according to IDC, the market research company.

But Lenovo's performance in the mobile phone sector has since stumbled. In 2016, its global share was only 3.5% and it had slipped to eighth place among the world's smartphone makers. That is worrying investors. 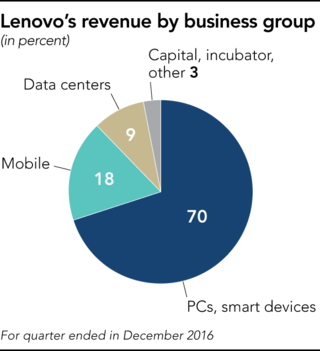 The company's weak earnings results have not helped matters. For the full year ending in March 2016, the company's mobile business posted a $469 million loss. The troubled mobile sector is weighing on the overall business performance of Lenovo, which posted its first loss in seven years.

Lenovo's struggle with Motorola has shaken the faith of investors who believed the company could do no wrong when it came to takeovers. But according to a former Lenovo manager, who spoke on condition of anonymity, the company made a key mistake when it acquired Motorola by "not sticking to its own success model that it has learned with PC business takeovers -- understanding local demand and keeping its hands off acquired businesses."

Lenovo's openness and willingness to understand and learn from different cultures has long been a corporate habit. That tradition had been established in the early days of the business under Liu Chuanzhi, who helped establish New Technology Developer, a predecessor of Lenovo's parent company Legend Holdings, in 1984. The company got its start in a 20 sq. meter reception room at the Institute of Computing Technology of the Chinese Academy of Sciences in Beijing. Liu and 10 other colleagues initially invested 200,000 yuan (about $29,000 at the current exchange rate), with the funds provided by the government.

Lenovo's business struggled in its early years. Since Liu and his colleagues all had science and engineering backgrounds but no knowledge or experience in managing a company, the venture ran out of money within a year.

It was not until 1986 when the company encountered its first success with a circuit board that allowed PCs to process Chinese characters. At the same time, Lenovo developed a corporate culture that emphasized client demands. "Do not let technologies make you overconfident, give a high priority to clients and local demands," Liu said.

This attitude has remained the bedrock of Lenovo even as Liu handed over power to his successor, Yang. When the company acquired IBM, Lenovo preserved the U.S. company's storied reputation for both brand excellence and an efficient sales network serving corporate clients. Most IBM executives were retained and Lenovo did not try to impose its own technology and business practices, while respecting IBM's sales strategy and product development.

Yang, the son of two surgeons, also tried to integrate Asian and American corporate cultures. For example, he encouraged employees to greet him using his first name in an effort to break down the business hierarchy. 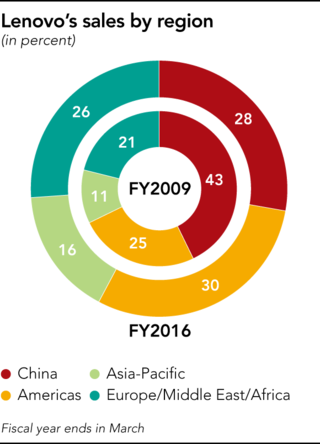 The company followed a similar strategy in its partnership with Japan's NEC that began in 2011. Once again, local demand influenced the core business strategy and Lenovo relied on Japanese workers instead of sending people from headquarters in China. Lenovo's strategy proved successful as it became the largest PC maker in Japan.

But its takeover of Motorola has proved to be a different story. Instead of keeping the company's management team, Lenovo soon after appointed a former executive from its PC business to manage the company despite having little experience in the mobile business. This led to an inconsistent corporate strategy, according to people who are familiar with the matter.

The change in management led to a strategic shift. The new executive leadership wanted to focus on the introduction of Motorola products in the Chinese market, which required changes in both hardware and software, while ignoring other key international markets. Motorola also saw long-time managers leaving the company, while transferring others to new posts.

After more than a year, Lenovo finally cleared strategy to halt falling sales. During an earnings result conference call in February, Yang said that "we have already formed a strategy" that would focus on the Lenovo Moto brand as the flagship product. "Singular branding will benefit the business," he said.

But in the meantime, Motorola has suffered damage to its reputation. Steven Tseng, an analyst at Daiwa Capital Markets, said, "Customers are also really confused by the company's strategy."

This was reflected in the share price of Lenovo, which is listed in Hong Kong. As of March 24, Lenovo's closing share price had fallen below HK$5.00 ($0.64), 20% lower than the share price of a year ago and more than a 60% decline from a recent peak price in mid-March 2015. Despite its top position in the PC market, the company's market capitalization has fallen to around $7 billion, lower than its Taiwanese peer Asustek Computer which is also struggling to expand in smartphones. Meanwhile, Apple's market cap stands at around $740 billion.

Lenovo has also faced increased competition in the Chinese mobile market where companies quickly come and go. "The market competition will become even more intense and Lenovo will face another tough battle this year as its smartphone unit continues to lose money," said Joey Yen, a Taipei-based analyst at IDC. 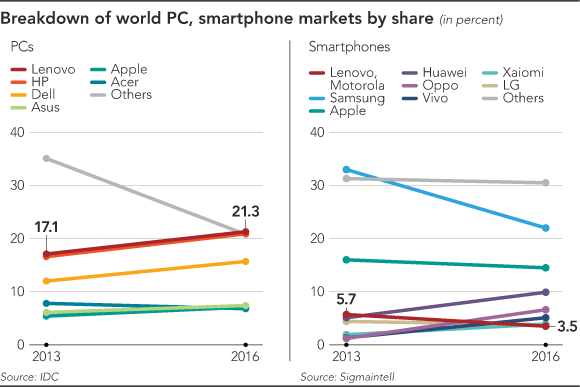 To improve profits, Lenovo has cut the Motorola workforce and discontinued the production of most of its cheaper smartphones. Meanwhile, it has been attracting new top management with the hiring of four vice presidents for the mobile business, including Ma Daojie, a former China Telecom executive who spearheaded the state-owned company's smartphone business; Jiang Zhen, a former executive at Samsung Electronics; Zhu Han from China's consumer electronics maker TCL; and Yu Gao from China Mobile.

Yet analysts remain concerned about Lenovo's mobile business. "Reshuffling the management team is not going to make it easier for Lenovo to survive in the fast-changing smartphone market," said a Beijing-based IT analyst. "They are better off turning back to focus on the PC business, like completing the purchase of [Japan's] Fujitsu's PC unit." Lenovo may indeed be following this strategy in returning to the PC sector -- the only bright spot at the company. It posted a 7% year-on-year increase in pretax profit from PCs at $431 million during the three months ended December 2016.

"Many players are considering pulling out from PC market and we want to absorb their share," said Yang. By taking over other companies, Lenovo aims to increase its global PC market share to 30%. "PC is our core business," Yang said in Barcelona.

A Lenovo spokesperson based in Hong Kong did not reply to repeated calls and email requests for comment on its strategy by the Nikkei Asian Review as of March 24.

The back-to-basics strategy is likely to pay dividends. Eileen He, a Shanghai-based analyst for Gartner, a market research company, said that even if smartphones and tablets reduce consumer demand for PCs, business demand is still strong. "Demand for PCs that offer professional features including a good [central processing unit], display and security features will remain solid or even grow as offices and educational institutions will still need PCs as their main device," she said.

In that sense, prospects remain bright for Lenovo since it has the strongest connections when it comes to schools and government institutions in China. "Lenovo has been always the leader in providing new PC features by leveraging the resources of the companies it has acquired. The company has strong advantages compared to any other players in PC market," noted He.

But it is unclear whether a focus on the PC business will guarantee Lenovo's future. Lenovo may thrive in this market, which  many others are starting to abandon, but the company "will immediately feel a decline in PC demand especially in China," said Anita Wang, an analyst at research company TrendForce based in Taipei. After all, there is no question among analysts that the PC market is on the decline.