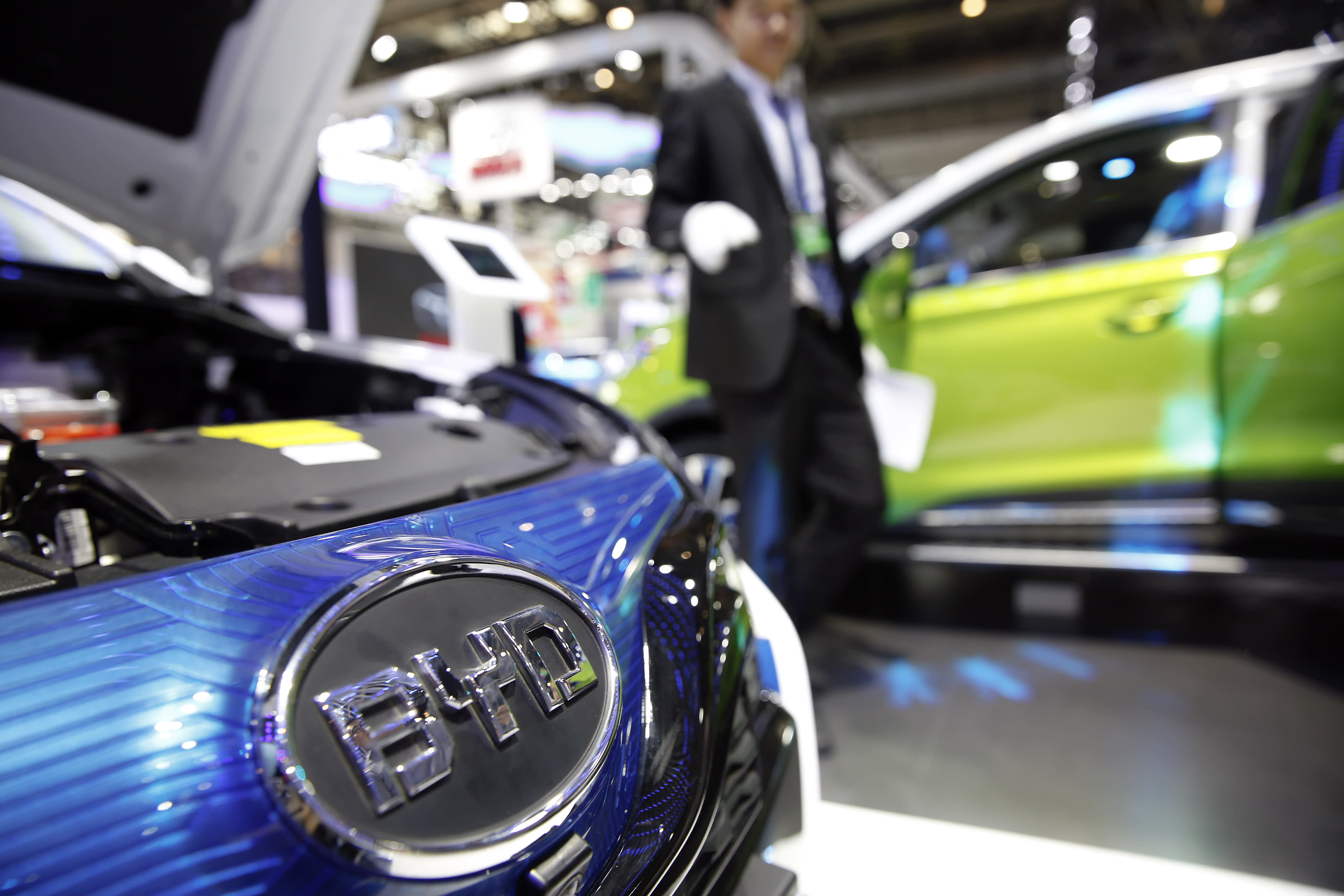 GUANGZHOU -- Shares of China's largest green car manufacturer, BYD, have been skyrocketing from early September, reflecting expectations that the company stands to benefit from government policy of promoting eco-friendly vehicles.

BYD's stock rose to HK$83.7 on Oct. 9 from around HK$50 in the earlier half of September. It currently hovers around the upper HK$70s level, making U.S. investor Warren Buffett's 2008 bet on the relatively unknown company look like a stroke of genius.

The climb was triggered by the Sept. 9 remarks of a senior Chinese government official, who revealed that Beijing was creating a timeline for banning production and sale of gasoline-powered cars like Britain and France. 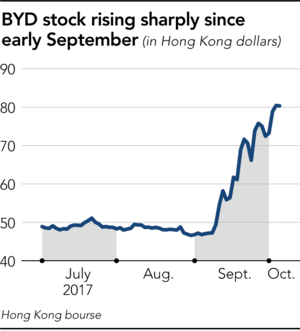 On Sept. 11, BYD climbed 4.6% to HK$49.4 owing to the automaker also being a leading manufacturer of batteries for green cars.

Regulations for new energy vehicles, or NEVs, announced by the government on Sept. 28, are behind BYD's gains. The regulations -- said to be the world's toughest for green cars -- require automakers to manufacture electric vehicles and plug-in hybrid vehicles at a set percentage of their annual gasoline-powered car sales.

Due to go into effect in 2019, the regulations include fines for makers failing to meet their quotas. Those that fail can skirt the fines by purchasing "credits" from other manufacturers to make up for green cars they cannot produce.

Given BYD's already large sales of the eco-friendly vehicles, the company should be able to meet its quota and have a surplus of credits to sell to other makers. BYD also produces gasoline-powered cars. BYD sold 96,000 electric vehicles and plug-in hybrid vehicles in 2016. According to NEV regulations, the company has already amassed 290,000 credits. In the credit-trading market planned by the government, each credit will be worth 10,000 yuan ($1,518), meaning that BYD's credits total 2.9 billion yuan.

China's rule changes have eco-car makers in a jam

It is estimated the company could earn 14 billion yuan by selling credits in the first three years after the NEV regulations begin.

No wonder then, that analysts are becoming increasingly upbeat about the company's future. "We believe BYD is in position to leverage [NEVs] and benefit from exports of additional power battery capacity," said Ronnie Ho at CCB International. The company kept its rating for BYD shares at "outperform," but raised the target price of BYD shares to HK$88.50 from the previous HK$78.90.

Beijing has enabled Chinese automakers to dominate the domestic market for green cars by shutting out foreign manufacturers and providing subsidies to support domestic producers. The government's sudden announcement of the strict regulations drew protests from foreign automakers.

The decision has failed to give non-Chinese makers enough time to prepare, such as building new plants and designing new models, effectively ensuring fines or forcing them to buy high-priced credits from Chinese manufacturers once the regulations go into effect.

"No wonder the stock price of BYD is rising under the credit system," said a Chinese stock market official, revealing the realities of China's "electric vehicle revolution."