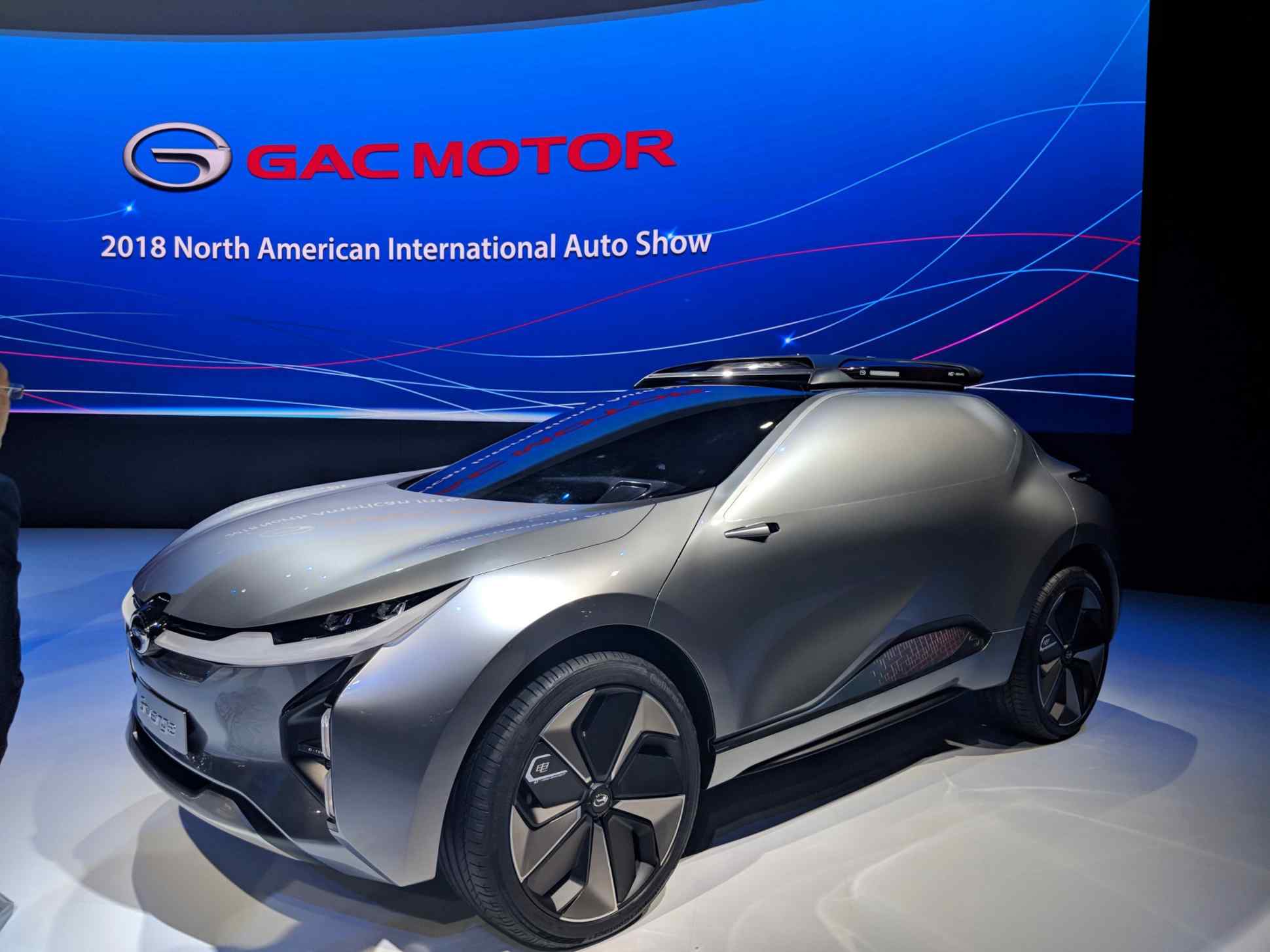 A concept electric car that China's GAC plans to release in the U.S. market by the end of 2019 is displayed at the North American International Auto Show in Detroit.
Asia300

DETROIT, U.S. -- China's next-generation vehicle manufacturers are starting to get noticed in the U.S., their key target market. And while some of these new players may fade away, the sheer number of projects underscores the ample funding available back home.

Guangzhou Automobile Group (GAC) lucked into a bit of public relations magic when Donald Trump won the U.S. presidency. The Chinese company's brand, Trumpchi, bears a striking resemblance to the name of the Oval Office occupant. But at the North American International Auto Show, which opened in Detroit on Saturday, GAC managed to generate a buzz for another reason.

On Monday, it unveiled a concept electric car with doors that open upward like butterfly wings.

Skeptics might note that the doors require more space to open than conventional ones. GAC has not revealed its envisioned price, either. But the company plans to introduce such a car by the end of 2019, and the concept model served its purpose of attracting attention.

By the end of this year, GAC plans to set up a sales company in the U.S. It also intends to open research and development centers in Silicon Valley and Detroit, along with a design center in Los Angeles. The company has grown to produce 2 million vehicles a year in China, and now it has the money to expand abroad; it is preparing to enter Europe as well.

Detroit is not the only place where Chinese players have been causing a stir. At the annual Consumer Electronics Show in Las Vegas, which wrapped up last Friday, electric-car venture Byton drew large crowds to its exhibit -- situated not far from booths of the likes of Toyota Motor.

Byton's car features self-driving capability and a flashy interior, complete with a 49-inch screen across the dash. The glitz is not surprising when you consider the company's financially powerful backers: Taiwan's Hon Hai Precision Industry, better known as Foxconn, China's Tencent Holdings and a luxury car dealer. 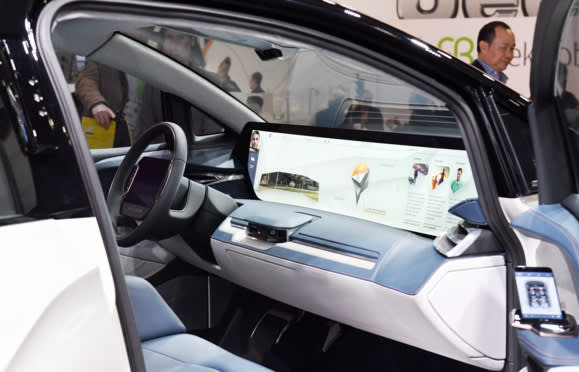 Byton is headquartered in Nanjing, where it also has the support of the local government. Its website, though, spotlights its Silicon Valley office. The executive in charge of purchasing used to work for Tesla, the pioneering U.S. electric-car company.

All of this is part of an increasingly common branding strategy on the part of Chinese startups: crafting an image of a Western high-tech company.

Lucid Motors, which has also drawn investment from Jia, hired a former Tesla executive as its chief technical officer and has an R&D center near Silicon Valley. 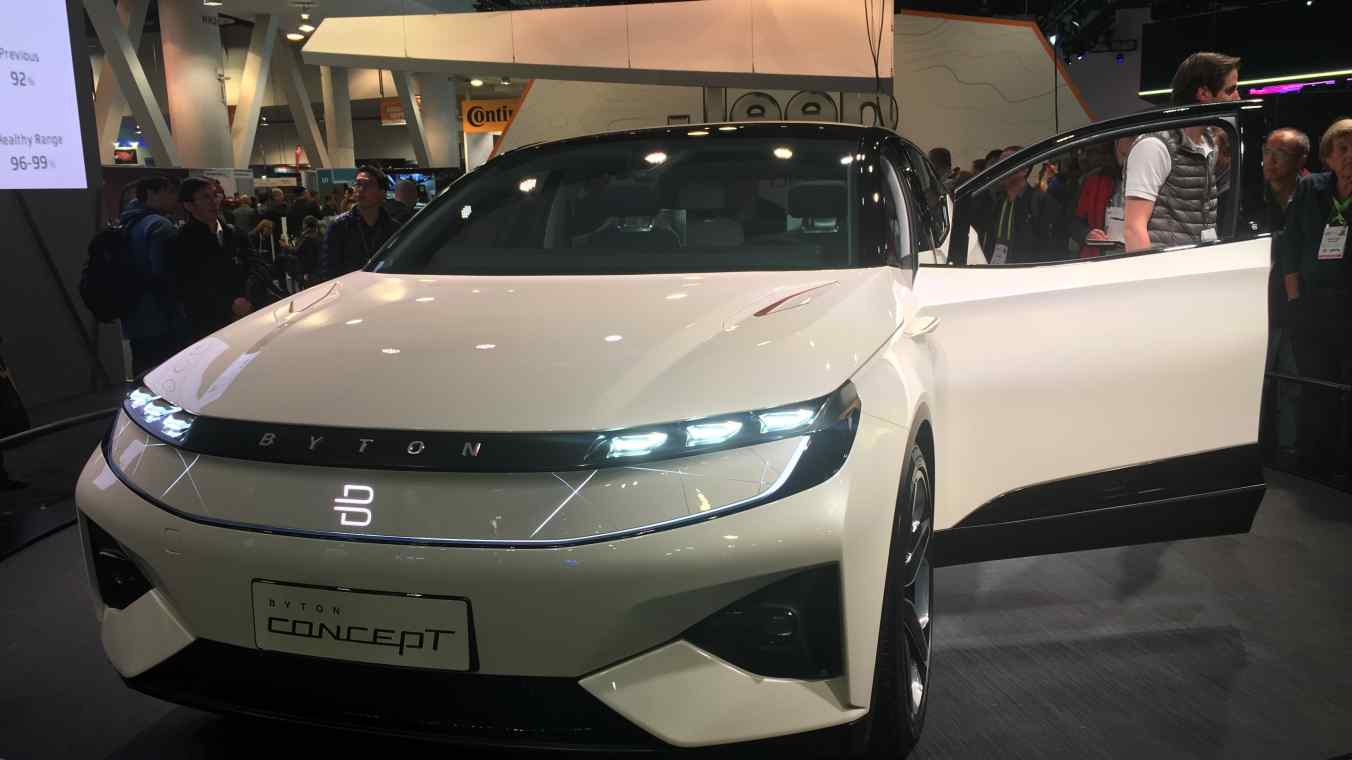 The question is, how many of these industry newcomers will be able to deliver the goods over the long haul?

Circling back to Faraday Future: Last year, the company was the talk of the global auto industry. But key engineers have jumped ship and Jia's widely publicized financial woes have cast doubt on its prospects.

Even prior to last year's CES, the construction site for a massive Faraday Future factory in northern Las Vegas was relatively quiet, with much of the machinery sitting idle. Last July, the company shelved the project.

The company -- backed by renowned U.S. investor Warren Buffett's Berkshire Hathaway -- recently started expanding production of batteries in Lancaster, on the outskirts of Los Angeles, without much fanfare. BYD's electric bus, which has been introduced by Stanford University and the city of Los Angeles, has an order backlog of over 600 units -- about eight times the shipment volume for 2017.

BYD plans to boost the annual production volume more than tenfold, to 1,500. Passenger vehicles are also in the pipeline.

The company is positioning itself to capitalize on proposed regulations in California -- the most populous U.S. state, with an economy that would rank among the global top 10. The state is thinking about requiring automakers to raise the share of zero-emission vehicles in their sales to 2.5% by 2023.

In the meantime, BYD is actively entrenching itself in the community. It plans to allow local employees to form a labor union -- a rare move for a foreign company -- to showcase its commitment to employment. It is also fostering relationships with politicians and has already secured a tract of land where it plans to produce passenger cars.