The source did not provide the details of their discussions.

The Nikkei Asian Review first reported on Friday that the two executives were set to meet when Williams visited Taiwan for the 30th-anniversary celebration of Taiwan Semiconductor Manufacturing Co., the sole supplier of the iPhone's core processor. The event took place on Monday afternoon at a hotel in downtown Taipei.

Foxconn is exclusively responsible for assembling the iPhone X.

The meeting between Gou and Williams came as Apple suppliers have been scrambling to churn out the iPhone X in large enough quantities to meet apparently strong demand despite ongoing problems with the dot projector, a component in the 3-D sensor module responsible for facial-recognition functions. The iPhone X is that first smartphone to allow users to unlock handsets and make payments through facial recognition.

Apple suppliers continue to struggle with a low yield rate, which refers to the number of usable units in a batch of components or products produced in a manufacturing process, and affects a company's margins and bottom line. As a result, the American tech giant and its 3-D sensor manufacturing partners could see their earnings take a hit in the current quarter.

Although Gou and Williams talked with each other ahead of the TSMC celebrations, the two did not speak during the event, in which the Apple executive was a featured speaker.

During his remarks, Williams said he expects more features related to artificial intelligence and deep learning to be incorporated into future mobile devices. "We think the 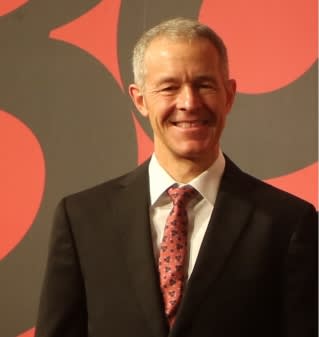 Apple's Jeff Williams painted a positive picture of a society in which AI is fully developed. (Photo by Cheng Ting-Fang)

phone is a major platform for artificial intelligence, but not exclusively," he said.

Williams added that artificial intelligence could open up a wealth of new opportunities for developers, downplaying some observers' fear that intelligent machines pose a threat to humanity and that developing such technology is dangerous.

"The fear that in the future, machines could somehow take over and start thinking ... I think it's a long way off before [artificial intelligence] is able to do that kind of human thinking," the Apple executive said. "When it comes to specialized deep learning, I think it's going to open up opportunities. I think most of them are not dangerous. I don't worry about it in a next of couple of decades that machines would start to take over the world."

While TSMC celebrated its anniversary on Monday, its smaller U.S-based rival GlobalFoundries held a forum in Shanghai partly to promote its first facility in China, in the central Chinese city of Chengdu. GlobalFoundries officials said they expect the new fab to begin bringing in revenue late next year, increasing the contribution from the Chinese market to overall revenue.