TAIPEI -- Leading iPhone assembler Hon Hai Precision Industry endured its first decline in full-year net profit since 2008, hampered by weaker-than-expected sales of the smartphone while the company struggles to reduce its reliance on Apple.

Hon Hai, better known as Foxconn Technology Group, reported Friday that net income for 2017 shrank 6.68% to 138.73 billion New Taiwanese dollars ($4.76 billion). Earnings per share of NT$8.01 were the lowest in the past six years.

Foxconn's gross margin dipped 0.94 percentage point last year to 6.44%. The operating margin plunged 1.62 points to 2.39%, Foxconn's filing with the Taiwan Stock Exchange shows, the weakest since the company recorded a 1.43% margin in 2012.

Apple produces more than 50% of the Taiwanese company's revenue.

Foxconn posted net profit of NT$71.65 billion in the October-December quarter, up 4.2% on the year, but that growth came mainly from an NT$66 billion gain tied to the disposal of Sharp's preferred stock at the end of December rather than iPhone sales. 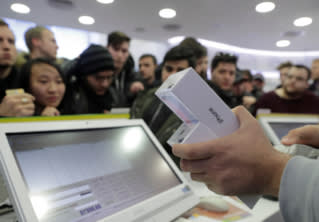 Apple's new iPhone X is sold during its global launch at a cell phone store in central Moscow on Nov. 3, 2017.   © Reuters

The bid continues Foxconn's efforts to diversify from its electronic product assembling business, which carries a razor-thin margin.

Ennoconn Chairman Steve Chu told reporters Friday that his company could benefit from Marketech's expertise in building the autonomous, connected and smart factories of the future.

"We are eyeing the massive opportunities, especially in China, when a lot of companies are upgrading their manufacturing systems," Chu said.

Marketech said in a stock exchange filing on late Friday evening that it will call a meeting to evaluate the bid within 15 days.

FIT Hon Teng, Foxconn's cable and connector subsidiary, said Tuesday it plans to acquire Belkin International -- an American maker of smartphone accessories, networking and smart home connected devices -- for $866 million in cash as the unit aims to expand its exposure in the "internet of things" field.

The Foxconn unit, traded on the Hong Kong stock exchange, said the deal offers access to Belkin's retail network in North and South America, Europe and the Asia-Pacific while leveraging FIT's manufacturing capability.

The acquisition also would bring Belkin's Linksys and Wemo businesses, which make networking devices and smart home products, respectively, according to the Taiwanese firm's filing with the Hong Kong exchange.

A Taipei-based analyst who requested anonymity told the Nikkei Asian Review that he takes a conservative view on the deal, given that the $866 million acquisition far outweighs Belkin's $4.66 million net profit last fiscal year and $57.42 million in assets.

"We can see that FIT, like its parent company Foxconn, is trying to scale back its reliance on Apple by expanding its horizon in other brands, but we don't see the rationale to buy Belkin with so much money," the analyst commented.

In a separate filing with the stock exchange late Friday night, Foxconn said it plans to invest $15 million to set up a unit in the Chinese city of Shenzhen to manufacture 3D glass. The move is also for the company's long-term growth development, Foxconn said, without elaborating in the filing.