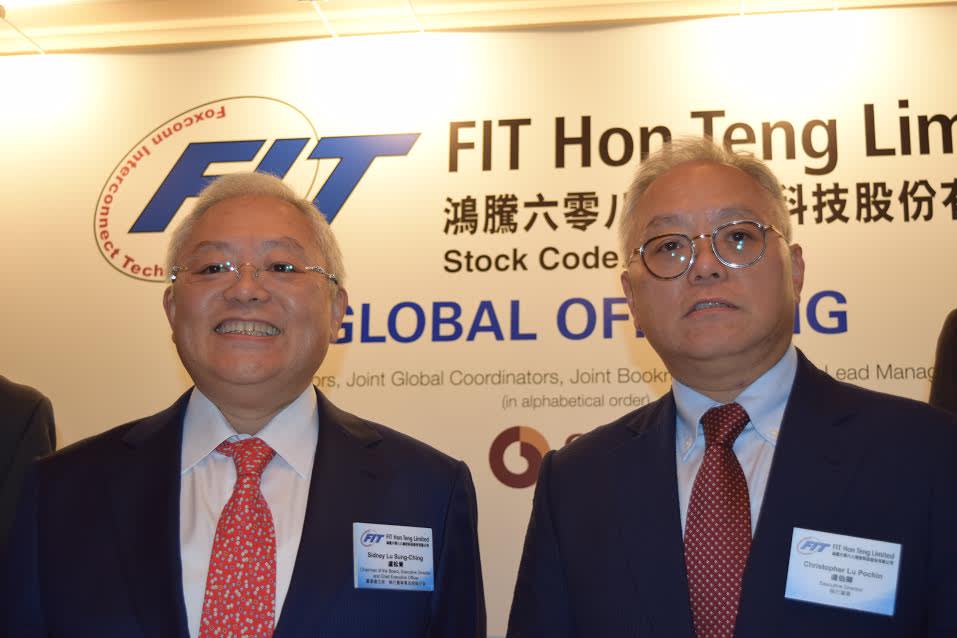 The company is selling 990.06 million new shares, which represents 15% of the enlarged total issued share capital after the float. They are being marketed at between HK$2.38 and HK$3.08 apiece. The deal will price on July 6 and the stock will begin trading July 13.

A quarter of the IPO proceeds will be used for mergers and acquisitions, another 25% for investment in optical transmission solutions and other interconnection technology applicable in advanced data centers.

"In terms of M&A opportunities, it's really into what we call the future-growth areas, the areas that we have significant ambitions, the A.I.M.," said Lu Pochin, FIT Hon Teng executive director, referring to the automotive, industrial, and medical sectors. He said the company would tap "some unique opportunities that existed in the mobile devices market" and make a drive into "communication infrastructure."

In May, the company completed its $2.5 million takeover of XingFox Group, with which FIT has been collaborating since mid-2016 to conduct research and development in batteries, especially pouch cell batteries that can be used in mobile and wireless devices.

In December 2015, FIT also bought the optical module unit of supplier Avago Technologies Wireless Manufacturing ahead of its merger with Broadcom, a fabless semiconductor company headquartered in both Singapore and California.

According to the IPO prospectus, 3% of the funds raised will be devoted to the enhancement and addition of production facilities relate to optical modules. North America would be a likely destination, the company's CEO Lu Sung-Ching told reporters on Wednesday.

"Besides in Asia, particularly in China, we also have expanded into Southeast Asia and also South America. So the next phase, logically, we'll look at the global market as a whole. And as a supply base of course we're going to expand further into where the market is. So yes, the expansion [including] North America is our plan," said the CEO.

Pulled in by Apple

The move was in line with a plan by Hon Hai, better known as Foxconn Technology, to establish a manufacturing base in the U.S. at Apple's suggestion. Foxconn Chairman Terry Gou said in January that the group was considering building a highly automated display panel production facility and a molding facility in the U.S. Foxconn is a key iPhone assembler.

FIT was spun off from the contract electronics giant in April 2013 as part of its streamlining process. Foxconn still holds 92.57% of FIT, which later created other subsidiaries in Singapore, Vietnam, Japan, and the U.S in addition to the mainland entities acquired from Foxconn.

However, FIT's orders from Foxconn has been declining steadily over the past few years, from $1.09 billion in 2014 to $661.1 million last year, representing 44% and 23% of the company's total revenue respectively.

FIT CEO declined to comment on whether the company would receive more orders from Apple, but was "extremely confident" about the company's "solid performance this year."

The company attributed the decrease in profitability to rising raw material and component costs as a result of greater competition.

Partly due to the less-than-ideal financial results, the company decided to shelve its IPO plan last year. "Unfortunately, the time that we launched is a time that coincided with the U.S. election. There is just way too much volatility in the market for anybody looking at the capital market. That's the reason why we decided to wait and see," said Lu Pochin.