TOKYO -- China's Huawei Technologies and South Korea's Samsung Electronics are emerging as strong contenders in the battle for 5G equipment deals with Japanese mobile carriers, which are expected to introduce next-generation services in 2020. Up for grabs is a market worth an estimated 5 trillion yen ($44.3 billion) over a decade, combining all necessary investment by the country's three top mobile carriers, SoftBank, NTT Docomo and KDDI under its Au brand.

The three top carriers are all expected to kick start 5G services in the year ending March 2020, with their total investment to reach 500 billion yen annually for at least 10 years, creating a market worth 5 trillion yen.

The technology in 5G involves connections that are 20 times faster and higher data capacity than current 4G that would support connections between a larger range of systems as part of the internet of things.

Sweden's Ericsson and Finland's Nokia are currently the main vendors of SoftBank's 4G technology. But Huawei Technologies and ZTE, also from China, may start to erode their turf if their low-price strategies succeed.

"The two Chinese companies are offering incredibly low prices to SoftBank. That should give Ericsson a good run for its money," an industry source said.

In September, the company demonstrated technology that fits in with SoftBank Group Chairman and CEO Masayoshi Son's belief that, in the era of mobile 5G, there are big opportunities in technology that connects large systems though the internet of things. 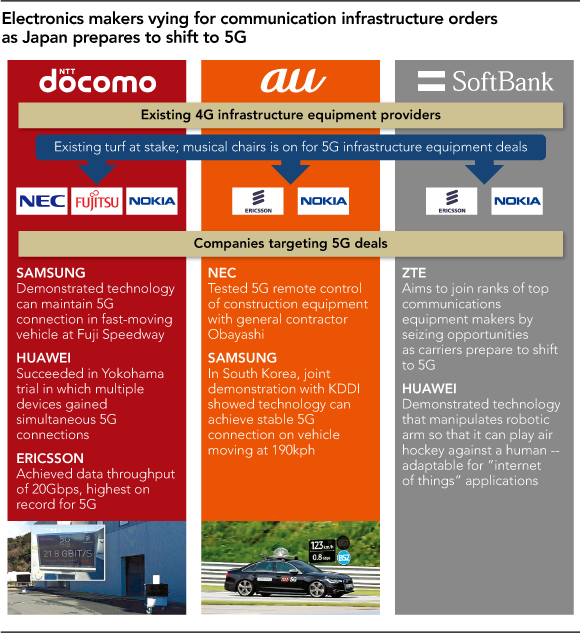 In a joint demonstration with SoftBank in Tokyo, the Chinese company had a robotic arm fixed on an air-hockey table play against a human opponent using a system that tracked the puck's trajectory with a camera and a computer, then fed the information back to the arm for a response over a 5G connection.

The system, made possible by 5G's extremely fast connection, with an ultra-low latency of one-thousandth of a second, can be adapted to applications for the internet of things.

Another factor that could give Huawei an edge is Son's stated desire to minimize investment in 5G.

With over a 30% share in the global wireless equipment market and revenue nearing 5 trillion yen, the Chinese company is in a comfortable financial position to give deep discounts. Also, its 5G mass-production capacity is already far ahead of rivals as it has expanded production for China's huge market, where investment in the next-generation technology is set to soon begin in earnest.

Ericsson and Nokia have supplied 4G equipment to KDDI. But their position is being threatened by Samsung, which has a small global presence in wireless infrastructure equipment -- a 4% share -- but which aims to significantly expand this as carriers seek suppliers for their 5G infrastructure.

Samsung stands out for its technological strength. In August, it conducted a joint demonstration with KDDI in the South Korean city of Yongin, where it maintained a 5G wireless connection between a static point and a vehicle moving at over 190kph on a test course.

"We lead the world in the technology for mobile communication for fast-moving vehicles," said Masao Akata, an executive with Samsung Electronics Japan.

The demonstration was a major step toward overcoming a technological hurdle for 5G. The technology for a mobile device to maintain a stream of data as it switches connection from one static base station to another while in motion -- a smooth handover -- is a major issue in making the technology viable for practical use. So far, most successful 5G trials have been between a single base station and moving devices, without a handover.

Samsung Electronics first succeeded in achieving handover for a device moving at 25kph in 2015. The company has started to test handover for devices on moving trains, using a train of JR East, the main railway operator in eastern Japan.

NEC and Fujitsu are currently the major suppliers for NTT Docomo, but Ericsson is making aggressive overtures.

"Our equipment development has advanced to the point where we can almost announce that they support 5G," Ericsson Japan President Toru Nozaki said.

In February 2016, Ericsson achieved mobile communication at a throughput exceeding 20Gbps at a NTT Docomo lab. Other telecommunications device makers have only achieved several gigabits per second. Ericsson has already achieved its peak throughput goal in 5G, and boasts of achieving the world's fastest connection.

Nokia has emerged as an especially notable contender after it acquired Panasonic's telecommunications equipment business in 2015, helping it expand its share of NTT Docomo deals.

In 2016, the Finnish company acquired French networking hardware manufacturer Alcatel-Lucent, which has a wide line-up of high-performance products for 5G, particularly for the backbone networks connecting to base stations.

Nokia is the only company that supplies equipment to all top-three mobile carriers and conducts testing, said Jae Joon Won, president of Nokia Solutions and Networks Japan, adding that he was keen to provide every type of 5G equipment in Japan.