The move comes after the Energy and Mineral Resources Ministry in January partially lifted a three-year ban on the export of raw minerals. The embargo inflicted two years of heavy losses on Antam, dropping its stock price, and left the company cash-strapped with a long list of unrealized downstream projects. 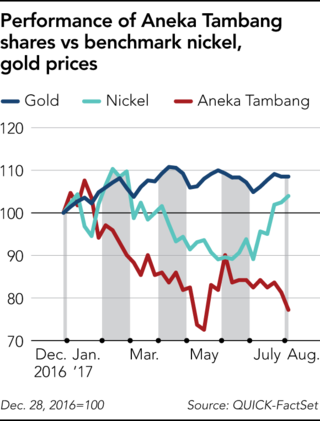 Antam resumed shipments to China in May, and plans to export 2.7 million tons of nickel ore and 850,000 tons of bauxite by the end of the year within limits set by the government. Nickel is used in the production of stainless steel, and bauxite in aluminum.

"We want to maximize and monetize all quota given," Finance Director Dimas Wikan Pramudhito told reporters on Monday. He said increased quotas are being requested for 2018.

Indonesia, formerly the world's top nickel exporter, introduced a law in January 2014 banning exports of selected minerals. Antam relied on nickel and bauxite ore for 30% of its revenue, and is looking to recover revenue and maintain employment.

Antam's stock price has fallen by a quarter this year, while Indonesia's benchmark stock index gained 10%. It is unclear if investors will benefit from the recent relaxation on exports. Nickel prices remain volatile, partly due to political uncertainty in the Philippines, which replaced Indonesia as the world's largest exporter of the metal.

Antam's shares have underperformed benchmark nickel prices, which are up about 4% so far this year. Analysts have noted the lack of long-term government backing for the company. In May, S&P Global Ratings said it does "not incorporate extraordinary government support" in its Antam rating since the company operates mostly in the private competitive upstream mining and downstream mineral processing segments.

Antam's market capitalization of 15.9 trillion rupiah ($1.2 billion) pales in comparison to foreign mining companies in Indonesia, such as U.S.-based Freeport-McMoran and a local subsidiary of Brazil's Vale.

Other state-owned companies mine coal, tin, and aluminum, and their small size limits access to capital and keeps borrowing costs high. President Joko Widodo's push to consolidate such companies into a single holding company has faced delay.

Antam is lifting its ferronickel production, and will be able to sustain stainless steel production when it reaches 40,000 tons per year -- about twice 2016's output. The challenges it faces going downstream became evident late last month when Japan's Showa Denko announced it would sell its minority stake in their loss-making alumina (aluminum oxide) joint venture in West Kalimantan. Showa Denko said the plant had failed to meet production targets since opening in 2015, and it could not agree on a revamp strategy with Antam. A spokesperson for Antam said it will seek a new partner.

Other projects in the pipeline, such as a smelter-grade alumina plant and a precious metal refinery, have also failed to progress due to the lack of investor interest. Some investors understand Antam's need to export for funding, but the policy reversal has called government policy into question.