JAKARTA -- Indonesia's Astra International on Thursday announced major makeovers for two of its passenger car models as the country's top automotive distributor seeks to fend off a wave of new competition.

Astra, which controls more than 50% of the Indonesian car sales market, is under fresh pressure from Japan's Mitsubishi Motor and China's Wuling Motors, which are ramping up production of new compact minivan models after building new factories in the country.

Mitsubishi sold about 3,500 units of its Xpander multi-purpose vehicle in September and October, while Wuling has sold about 3,100 Conferos in the four months to October, according to data from the Association of Indonesian Automotive Industries. Analysts say it is still too early to judge the degree of their success. On Thursday, Astra's joint ventures with Japan's Toyota Motor and Daihatsu Motor launched new versions of their respective seven-seater sport-utility vehicles Rush and Terios. Both models will cost slightly more than the old models, starting from about 240 million rupiah ($17,800) for the Rush and 200 million rupiah for the Terios. Astra will begin shipping the new models in January.

The makeovers suggest the boundaries between different categories are dissolving. Both models have longer bodies, allowing extra passenger room, as well as a sharper look. Astra has scrapped the five-seater versions of its Rush model. In Indonesia, where large numbers of commuters often get stuck in traffic jams, compact minivans are the most popular category.

"The competition between medium SUVs and [compact minivans] is getting tougher," said Henry Tanoto, vice president of Toyota Astra Motor. "We have to answer the needs of consumers with bigger passenger capacity." The intensifying competition comes at a time when demand for four-wheel drive vehicles has been impacted by sluggish consumer appetite. Total car sales rose for the first time in three years in 2016 and is up another 3% on the year for the January-October period, but has yet to return to its 2013 peak of 1.23 million units. However, bullish car makers have already invested in new factories on the expectation that the rising middle classes will convert to cars from motorcycles.

If history is any indication, Astra's grip on the local car market will remain intact. Despite aggressive tactics by rivals like Honda Motor in recent years, Astra's market share has stayed at 50% or above in 16 of the past 19 quarters. Competition has had more of an effect on smaller players in Indonesia, such as U.S. car maker Ford, which announced its exit from the country in early 2016. Astra's main local rival Indomobil Sukses Internasional, which sells Nissan and Audi cars, is focusing on trucks and related businesses like financing and spare parts.

Net profit in Astra's automotive division, which also includes motorbike sales, for the January-September period rose 10% from a year earlier to 6.58 trillion rupiah ($487 million), representing 46% of the group's total. The company's business spans heavy machinery, financial services, agricultural products and banking, and it is now investing aggressively in infrastructure and property.

Toyota's brand power and manufacturing prowess is certainly a blessing, but it is not the only source of Astra's dominance. The company has built a network of about 2,500 dealers, giving it an unrivaled reach across the archipelago. It recently doubled down by spending $58 million to build a 62,000 square meter complex on the western outskirts of Jakarta that serves as a one-stop shop for its car and motorcycle brands. The dealers are equipped with workshops, financing departments and even indoor playgrounds. 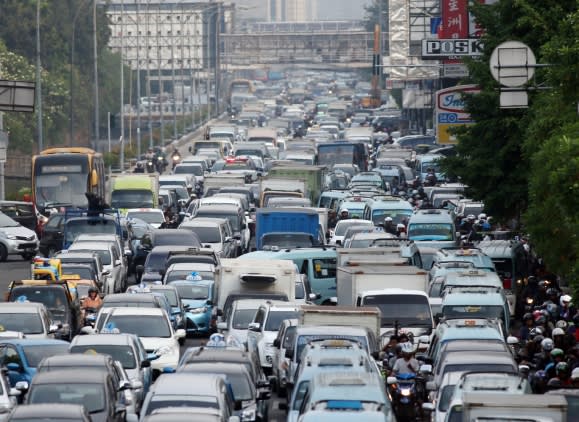 Massive traffic jams like this are a daily occurrence in Jakarta. (Photo by Ken Kobayashi)

The company is not without its weaknesses, however. The contribution of Rush and Terios to Astra's total four-wheeler sales has fallen from about 10% in 2012 to 5% this year, according to Bahana Securities, a local brokerage. The company has cushioned the damage by launching new models in the lower-price segments, but sales of some models have slowed in recent months.

Among its competitors, Mitsubishi's brand is well known due to its popular pickup trucks, and the company says it is now boosting the number of dealers selling its Xpander model and other passenger cars. Wuling, which operates in Indonesia under a joint venture with General Motors of the U.S., is offering lower prices and appears to be targeting untapped rural areas. Both are unlikely to throw in the towel anytime soon.

Bobby Nugroho in Jakarta contributed to this story