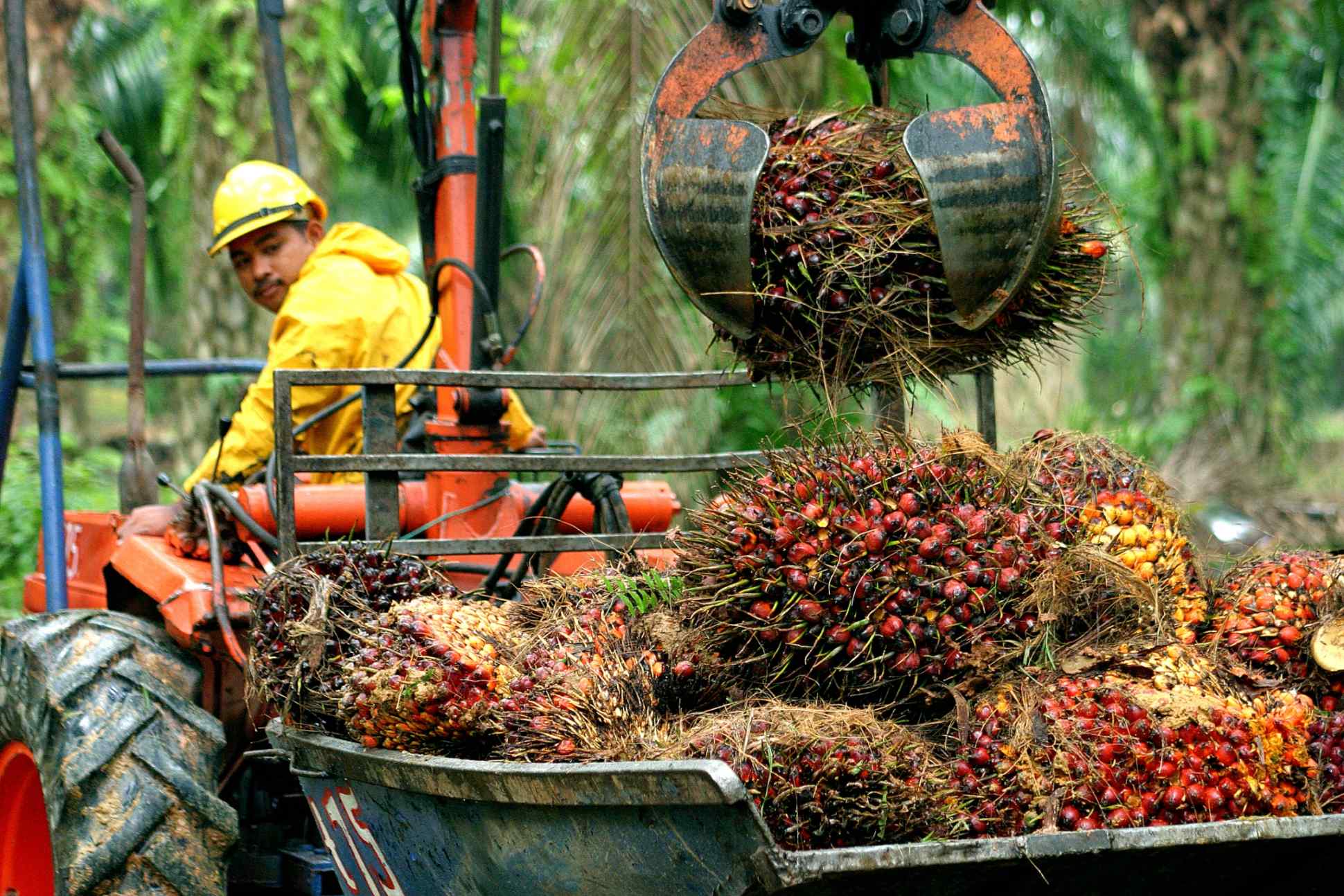 To free group from conglomerate discount, plantation and property divisions will be listed separately

KUALA LUMPUR -- Sime Darby, the world's largest plantation and palm oil producer, plans to split into three separate listed entities to promote future growth. The listing of plantation division, the core business of the Malaysian state-owned conglomerate, comes as demand weakens for crude palm oil. With the move, Sime Darby aims to free the group from an equity discount normally associated with conglomerates. Sime Darby will spin off the plantation business, which accounts for 27% of the group's revenue and 34% of its profit before tax in 2016, as well as its property unit which contributes to 35% of profit before tax on 7% of revenue. Existing Sime Darby will continue to directly manage the industrial division, which markets heavy machinery for the mining and marine sectors as well as being involved in vehicle distribution and logistics. The plantation and property businesses will be listed by the end of 2017 or in early 2018, depending on regulatory approvals.

The listings will not raise cash since it will not involve the issuance of new shares. Instead, shareholders, which include two state funds that hold a combined 56.4% stake, will have the option of either selling their stakes or receive shares in the two new listed units in proportion to their Sime Darby holdings.

Sime Darby's share price jumped nearly 5% to a 21-month high of 9.23 ringgit ($2.08) on Jan. 27 after the news was released. But the market's upbeat reaction lasted only a day before retreating to below 9 ringgit, suggesting skepticism over the ambitious plan. Sime Darby's share price has been languishing below its record high of 13.30 ringgit in January 2008. A global glut in palm oil has weighed on shares since the second half of 2014.

"The decision was taken after months, if not years, of deliberation at the board and management level," Mohd Bakke Salleh, Sime Darby's president and group chief executive told the media on Feb. 27. "The intended corporate structure is aimed at maximizing the value for shareholders, who will eventually hold shares in the three exciting pure plays," he said. Sime Darby is a diversified multinational company with more than 120,000 workers and a presence in nearly 30 countries and territories. Its plantation division owns a landbank of nearly 10,000 sq. km in Malaysia, Indonesia, Papua New Guinea and Liberia, and accounts for 23% of total global production of certified sustainable palm oil, an industry-regulated environmental standard.

Following Malaysia's independence in 1957, a group of technocrats with nationalist sentiments emerged in response to the introduction of an affirmative action policy in 1970 that favored the ethnic Malay population. Their goal was to wrest control of the economy from foreign investors and local ethnic Chinese businessmen. Plantation companies with vast landbanks were one of the sectors that came under government scrutiny.

In 1981, the government, under then Malaysian Prime Minister Mahathir Mohamad, decided to take over Guthrie Corporation Limited, whose roots can be traced back to 1821 when Alexander Guthrie, a Scot, established a trading company in Singapore. The company later expanded into the rubber and palm oil sectors. The government acquired control after it orchestrated a dawn raid to snap up the company's share in the open market in London. In 1990, the government also acquired Harrisons & Crosfield, which had started rubber production in 1903, and it was renamed Golden Hope Plantations.

In the 1980s, Malaysia converted much of its rubber land into palm plantations to produce cheap vegetable oil. Palm oil is produced by subtracting it from the tree's fresh fruit bunches some 30 months after planting. With proper care, each palm tree is capable of producing palm oil for about 25 years. Helped by rising commodity prices, Malaysia emerged as the world's second largest crude palm oil producer after Indonesia. The two countries account for more than 80% of total global production. The current Sime Darby group was formed in 2007 as a result of a merger of Sime Darby, Golden Hope and Guthrie under government supervision. It became the Malaysia's biggest company by market capitalization and was seen as a national icon. "As a merged entity, they have every chance of collectively becoming champions on the global stage," said then Prime Minister Abdullah Badawi.

The proposed changes in Sime Darby are in response to the commodity downturn that has affected much of its business. Malaysia's benchmark crude palm oil price declined from a high of nearly 4,000 ringgit in February 2011 to less than 2,000 ringgit in August 2015. Crude palm oil, which is used in household products from soap to ice cream, is now trading at nearly 3,000 ringgit after droughts caused by El Nino resulted in a production drop that pushed up prices.

"Today we stand at the beginning of Sime Darby's future," Bakke told reporters, noting that the listings coincide with the 10th anniversary of the merger and it is time for each division to have a separate listing since each is an industry leader. Bakke added that conglomerates are a "model of the past" unless they are family-owned. "Today's investors seek focus and prefer to invest directly in the sectors of their choice," he explained. "There are certain constraints because conglomerates operate on a different structure."

He noted that there are more than 500 subsidiaries and jointly-owned entities under the group's umbrella. The idea is to allow each entity to focus on its core business that will "dictate growth trajectory."

UOB Kay Hian said in a research note in January that Sime Darby's plantation already have a high valuation and the group's other businesses may not fetch "rich valuation" due to slow demand.

But Ivy Ng of CIMB Investment Bank has a relatively positive view. She said the divestment plan could unlock value and remove the discount attached to Sime Darby's conglomerate structure. Spinning off the property business which generates 35% of the group's profit before tax can be seen as a bold move and it could attract investors' appetite.

Earning contributions from property division may have served as a buffer to the slowdown in plantation business, which is cyclical in nature. Even so, holding the property division under the same umbrella is not without risk as the market has weakened since 2015. Malaysia's total property transaction fell 18% year on year to 31 billion ringgit in the third quarter of 2016, the latest data released by the government.

Based on Sime Darby's annual property sales of more than 2 billion ringgit, "its property arm is set to be one of the largest listed property players in the Malaysian market," PublicInvest Research, a local brokerage said in a recent report.

Moody's Investors Service has placed Sime Darby under review for a downgrade, citing lack of a clarity over its debt restructuring that would result from the divestment plan.

"The proposed listing of Sime Darby's plantation and property businesses is credit negative because the plan will reduce diversification, scale and cash flows, thereby raising the company's business risk," the rating agency said in March 6 note.

But Bakke defended the move. "Where are we now? We are now a true thoroughbred in the context of being a Malaysian global champion." He added that the group is ready to embark on the next phase of growth by turning each entity into a global champion. "Each pure play will have an exciting future," he predicted. And in particular, the plantation is "fundamental to the existence of Sime Darby," he added, noting that its sheer size by landbank cannot be duplicated elsewhere due to scarcity of land.

To ensure a clean break, Sime Darby said it will restructure assets and borrowings, which Moody's believes were largely taken to fund the plantation business. As of end-2016, the group's total borrowing stands at 15 billion ringgit, compared to 19 billion ringgit a year before. Its net gearing of 0.37 times, a measure of financial leverage is modest compared to regional peers. Still, how the group's existing debt will be allocated across the three entities will be the key to a review for downgrade, the rating agency said.

Breaking up state-owned companies is not new in Malaysia. Axiata Group, a telecommunications company was formed in 2007 as it was spun from Telekom Malaysia to conduct businesses abroad, while allowing its parent company to focus on domestic operations. Axiata has since grown into a regional group with a presence in nine countries, mainly in Southeast and South Asia. Its customer base has also swelled to nearly 300 million subscribers.

The split-up of Sime Darby is an indication that Malaysia's goal of nurturing "global champions" has reached the tipping point. 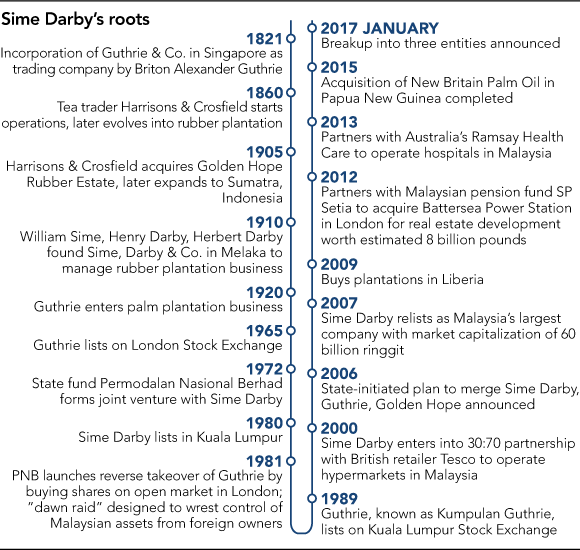