TOKYO -- "Networking is an essential part of building wealth." These words from Baron William Armstrong, a British inventor, scientist and industrialist, have rung true for more than 150 years. No surprise, then, that Asia's richest family, India's Ambani clan, built up its wealth on the back of telecommunications network services.

According to the 2017 Forbes list of Asia's Richest Families, the Ambanis' wealth was at $44.8 billion as of Tuesday, 74% more than a year earlier. 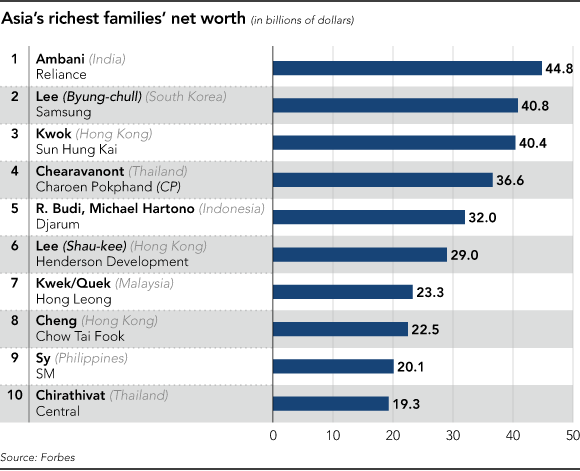 Mukesh Ambani runs India's largest conglomerate, Reliance Industries, or RIL. In fact, RIL's soaring share price is responsible for hoisting the Ambani family to No. 1 on the Forbes list.

RIL's stock price shot up 80% in the past year, mostly thanks to its telecom arm, Reliance Jio Infocomm, which has introduced a disruptively low-priced telecom service.

Mukesh's younger brother, Anil, runs the family's other telecom arm, Reliance Communications. The two brothers fell out after their father, Dhirubhai, died in 2002. Having two family companies in one of India's most cutthroat markets shows just how estranged the brothers are.

Including the Ambanis, Indian families take up 17 of the top 50 spots on Asia's rich list, the most in the region. Hong Kong is second in this respect with 9 spots.

Forbes began the list in 2015. For the first two years, South Korea's Lee family manned the pedestal. This year, the Lee family came in at No. 2.

The Lees' wealth also swelled, by 38%, to $40.8 billion. The family derives nearly 45% of its fortune from Samsung Electronics, whose share price went up 18% during the past 12 months.

The Kwok family of Hong Kong took the No. 3 spot. The family controls Sun Hung Kai & Co., which has been riding the property investment boom in major cities around the world. The company has been especially active in China, where about 60% of Sun Hung Kai's 12 million sq. feet in properties is located. The Kwok family's wealth amounts to $40.4 billion, up 60% from a year ago.

This kind of growth is not always a positive sign for the region's economy. Asia still has numerous countries suffering from a yawning gap between the rich and poor. If Asia is in a "the rich get even richer" scenario, it could be a sign that the distribution of wealth is failing.